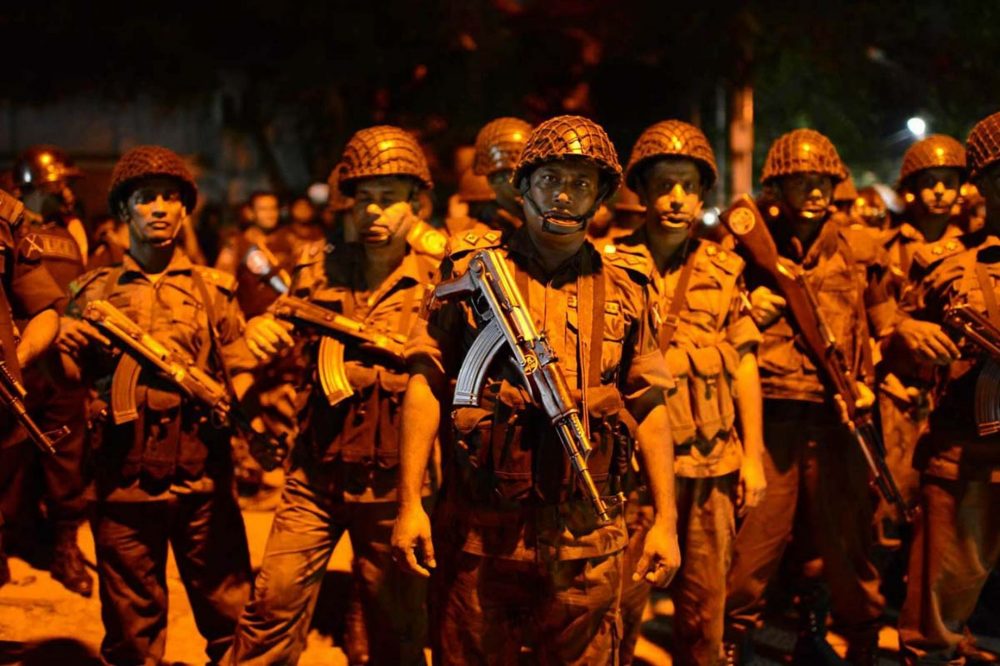 The appointment of the new Central Bank Governor was, for the most part, the main story in local news this week, while the Joint Opposition’s latest venture ‒ a ‘shadow cabinet’ ‒ has also made headlines.

Foreign news reports have been a lot more sombre, on account of terror attacks in other parts of Asia, while in the United States, violence perpetrated by and aimed at law enforcement has created quite an uproar.

The news of his appointment was the main focus of most local media outlets on Saturday (2) morning, following the announcement made by the President’s Media Unit. According to media reports, the appointment of Dr. Coomaraswamy had been made following meetings between President Maithripala Sirisena and Prime Minister Ranil Wickremesinghe.

Following his appointment and taking of office, Dr. Coomaraswamy made his maiden media briefing as the CBSL governor on Tuesday (5). There he addressed several matters regarding his appointment, which came after the exit of predecessor Arjuna Mahendran, whose tenure had been somewhat mired in controversy.

According to Dr. Coomaraswamy, no internal inquiry will be carried out into the alleged treasury bond scam that took place during Mahendran’s term as Governor. He also denied that he is a political appointee even though the President himself had appointed him. He said he had been appointed within the provisions of the Monetary Law of the country.

Framework Of Hybrid Court By 2017?

Foreign Affairs Minister Mangala Samaraweera has indicated that a framework for a hybrid court system may be announced by 2017. Image credit: slembassyusa.org

Foreign Affairs Minister Mangala Samaraweera announced on Wednesday (6) that the framework for the hybrid court system proposed by the United Nations Human Rights Commission (UNHRC) to address post-war issues is expected to be finalised by early 2017.

According to Samaraweera, the framework will hold alternative methods in spite of remarks made by both the Tamil National Alliance (TNA) and President Maithripala Sirisena with regards to appointing international judges into the local judicial system. President Sirisena had voiced his opposition to the proposal while the TNA had supported it.

Minister Samaraweera had stated that no final decision has been made regarding that yet.

He had also stated that the Office of the Missing Persons Bill, which has already been tabled in Parliament, will be debated soon. Meanwhile, the proposed Truth Seeking Mechanism is expected to be finalised soon and presented to the House as a White Paper by this September.

The Joint Opposition, convening at Parliament on Thursday, announced its ‘Shadow Cabinet’ with former president Mahinda Rajapaksa as the Prime Minister.

The announced shadow cabinet refers to an alternative cabinet to the existing one, comprising Government members, in which members of the opposition criticise their corresponding Minister of the Government cabinet.

In the shadow cabinet, MP Namal Rajapaksa will hold the seat of Minister of Foreign Affairs, MP Wimal Weerawansa is to be Minister of Housing, Construction, and Engineering Services, while MP Udaya Gammanpila will be the Law and Order Minister.

Today, however, former president Mahinda Rajapaksa and MP Lohan Ratwatte resigned from their positions, claiming that there is no apparent need for a shadow cabinet.

Indian media reported on Tuesday that India and Sri Lanka have taken steps to renegotiate the controversial Economic and Technical Cooperation Agreement (ETCA).

The renegotiation had taken place during a meeting between Minister of Development Strategies and International Trade, Malik Samarawickrama, and Indian Minister of Commerce, Nirmala Sitharaman.

The ETCA discussions are expected to be completed by the end of December.

The explosion near the mosque in Medina sends smoke pouring into the sky. Image credit: independent.co.uk

The bomb exploded in the town of Karada, injuring hundreds, with the body count surpassing 200 on Monday morning. Amid cleaning activities, bodies were found charred and mangled under rubble, hindering operations that did not conclude till Wednesday.

The Islamic State terror outfit (ISIS) stands accused of the attack, while the people of Baghdad also blamed the country’s government for not providing sufficient security.

On the same day, a series of suicide bomb attacks across Saudi Arabia resulted in a total of four deaths, apart from the bombers themselves. The deadliest of the attacks was reported on Sunday (3), outside the Prophet’s Mosque in the holy city of Medina, where four security officers were killed and at least five others injured.

Earlier that day, suicide attacks were also reported from Qatif and Jeddah. The attacks occurred soon after sundown during the holy month of Ramadan, and have been associated with the Islamic State militant group, although the terrorist organisation is yet to claim responsibility.

Today (8), Saudi officials told media that 19 suspects have been arrested in connection to the attacks. Twelve out of the arrested perpetrators are Pakistani nationals, while the remaining seven are Saudi nationals.

A relative mourns a victim who was killed in the recent attack in Dhaka, Bangladesh. Image credit: aljazeera.com

The Saudi attacks came just days after another deadly attack in Bangladesh on Thursday, when several gunmen ambushed a large Eid festival, throwing small grenades and launching a gun attack.

The attack that occurred on Thursday (7) has resulted in at least four deaths and had caused injuries to a number of people. More than 100,000 worshipers were praying in an area called Sholakia, 62 miles (100 kilometers) northeast of Dhaka, when the attack began.

This is the second terror attack to hit Bangladesh in recent times, after the attack on the Holey Artisan Bakery last week.

Dallas Police in a stand-off with a protesting gunman. Image credit: cdn.sandiegouniontrib.com

The city of Dallas in Texas has been in an uproar after five police officers were killed by snipers at a protest on Thursday night, in what has been recognised as the deadliest attack on U.S. law enforcement since 9/11.

The protest was carried out after the two separate killings of African American men in Louisiana and Minnesota earlier this week.

On Wednesday, Minnesota Police shot and killed Philando Castile while he was inside his car, and in the presence of his girlfriend and her daughter.

Video footage, shot by Castile’s girlfriend, shows the police officer shooting four times at Castile when he was reaching for his driver’s license and registration papers. Castile had notified the police officer that he had a firearm in the car and was licensed to carry it.

The police officer later claims, in the video, that Castile was reaching for the gun, forcing him to shoot Castile.

Following this incident, another individual was shot dead by police in Louisiana, after which several protests against police violence were staged in several parts of U.S.

It was during one such protest in Dallas that snipers shot at eleven police officers, killing five. According to foreign media, three people are in custody after the attacks, while one suspect had been killed during a stand-off with police.

Argentine and Barcelona star footballer Lionel Messi was sentenced to 21 months in prison for tax fraud.

Jorge Messi, his father, was also sentenced to prison over the USD 4.5 million tax fraud between the years of 2007 and 2009.

However, the two will not be spending their term inside jail since the Spanish prison system decrees that if the prison term is under two years, it can be served under probation.