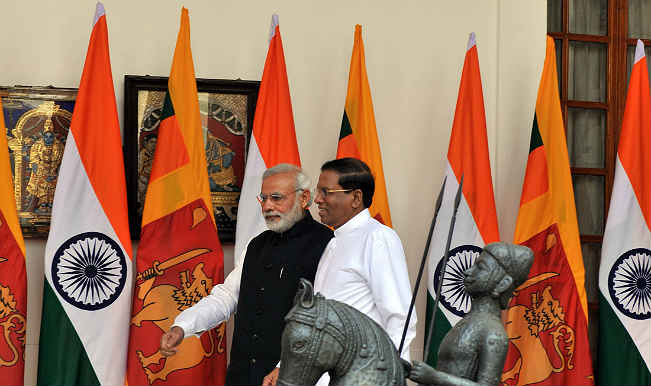 December’s second week is already over, and the end of 2015 is just around the corner – yet the news never sleeps. It’s been an active week for Sri Lanka’s government, and law enforcement. Here’s this week in news:

The Other Bond Scam

Minister of Power Ranjith Siyambalapitiya lodged a complaint with the Criminal Investigation Department on Wednesday (9) stating that EPF funds amounting to Rs. 3 billion invested in Treasury Bills had disappeared.

The Ceylon Electricity Board (CEB) had invested Rs. 2,959 million and Rs. 267,568 million in 2009 in share transactions through a private firm, but Central Bank records up to December 31, 2014 show no such deposit.

Prime Minister Ranil Wickremesinghe informed Parliament on Wednesday that the Comprehensive Economic Partnership Agreement (CEPA) will not be signed with India. He added that we would only enter into an economic and technological cooperation agreement, which excludes provisions for Indian professionals to work in the island.

Colombo Additional Magistrate A. Nishantha Peiris, who was hearing several high profile cases including the murder of ruggerite Wasim Thajudeen, will be transferred with effect from  January 1, 2016 to Matara, as a District Judge.

The Government has said that the Saudi Arabian Court which sentenced a Sri Lankan housemaid to death by stoning had agreed to consider an appeal submitted by the Sri Lankan Government.

Deputy Foreign Minister Dr. Harsha de Silva told Parliament on Tuesday that the decision by the Riyadh Court to consider the appeal against the death sentence was a plus factor for Sri Lanka. The Ministry of Foreign Affairs will bear the expenses and lawyers’ fees, and will commit itself to persuade the Saudi Court to change the verdict in this case, the Deputy Minister said.

Avant Garde Security Services Chairman Major (Rtd.) Nissanka Senadhipathi was quizzed for three hours at the Criminal Investigation Department (CID) on Tuesday, in connection with controversial deals at Avant Garde, as well as over the complaints lodged by Health Minister Rajitha Senaratne and two other Cabinet Ministers.

They accused Senadhipathi of making defamatory accusations, which claimed the ministers had demanded hush money from him to sweep the Avant Garde conspiracy under the carpet.

Meanwhile, Opposition Whip Anura Kumara Dissanayake said on Monday (7), the JVP would at the opportune moment reveal detailed information of journalists who had been bought by the Avant Garde Company.

University entrants will have to undergo HIV/AIDs screening and blood tests for other socially communicable diseases before they enter universities, according to the Government’s latest proposals.

According to Health Minister Rajitha Senaratne, lessons on socially transmitted diseases would also be included in the school curriculum. The Government also plans to make Health Science a compulsory subject for GCE O/L students to qualify to pursue GCE A/L studies.

Former Securities and Exchange Commission (SEC) Chairman Dr.Nalaka Godahewa was arrested by the Financial Crime Investigation Division (FCID) and remanded on Monday (7), in connection with a large scale financial irregularity at the SEC.

The FCID has commenced investigations into the alleged misappropriation of money in 2013, that had been granted to the Tharunayata Hetak fund maintained by MP Namal Rajapaksa.

Thajudeen’s Killers to be Revealed Soon

The CID has decided to develop prints of several clear CCTV camera pictures connected to the murder of ruggerite Wasim Thajudeen which are in its possession.

The pictures are now being developed according to Police Media Spokesman, ASP Ruwan Gunasekera. The CID is meanwhile unable to release any information about the case because the Magisterial inquest and CID investigations are also yet to be completed.

Meanwhile, the bio samples taken from Thajudeen’s body and stored away in the freezer at the Judicial Medical Officer’s office might have been thrown away inadvertently after the freezer broke down. Former Chief JMO Professor Ananda Samarasekera made this revelation to the Colombo Additional Magistrate when the matter was brought up on Wednesday (9).

Mauricio Macri, who was sworn in as Argentina’s latest President on Thursday (10), vowed to tackle corruption, poverty and drug trafficking in the country.

Fifty six year old Macri will hold the seat for the next four years.

Leaving office, former President Cristina Fernandez de Kirchner bid farewell to supporters in an emotional speech, urging the people to take to the streets if they felt betrayed by the new centre-right government.

Volkswagen Chairperson, Hans Dieter Poetsch, said on Thursday (10) that a “chain of errors” led to the emissions scandal and that its top priority is winning back trust.

In September, US regulators found some Volkswagen diesel cars had a “defeat device” – or software – to cheat emissions tests.

According to foreign news reports, the problem began when Volkswagen decided to launch a large-scale promotion of diesel vehicles in the US in 2005, but had trouble meeting the strict emissions limits enforced at the time.

Volkswagen  is expected to initiate its franchise here in Sri Lanka as per the requests made by Prime Minister Ranil Wickremesinghe.

A Calcutta Court has found three men guilty for the 2012 gang rape of an Indian woman who later waived her right to anonymity to encourage other rape survivors to speak out.

The three suspects are to be sentenced today (11). Two other accused suspects are yet to be arrested. The case was widely reported as the Park Street Rape Case.