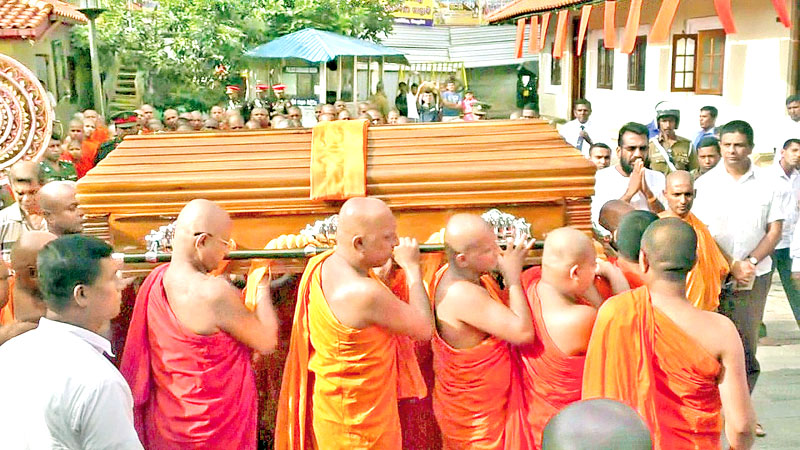 This week brought good news for a young boy who had to earlier face the prejudice of his village due to false rumours; other events had a more sombre outlook however, with the demise of the Chief Prelate of the Asgiriya Chapter, and the arrest of a monk over illegal possession of an elephant calf. In foreign news, leaked ISIS documents revealed vital information about members of the terror outfit, while closer to home, India launched another satellite.

The Principal of Trinity College, Kandy, Andrew Fowler-Watt, signed a Memorandum of Understanding with Minister of Education Akila Viraj Kariyawasam, on Wednesday (9) to admit a child who had earlier faced severe prejudice in his village after a rumour spread that he was HIV positive.

Minister Kariyawasam had earlier said that he was informed by the Kuliyapitiya Zonal Education Director that the boy’s mother had tested positive for HIV. He then went to say that the government had decided to separate the child from his mother.

Following strong condemnation of Minister Kariyawasam’s comments on the ‘HIV infected’ mother and her child, the Minister backtracked on his statement and acknowledged that it was wrong to publicly state that the mother was HIV infected.

For a more comprehensive breakdown of the whole story, check out out article here.

The Mahanayake Thera had been receiving treatment at the Intensive Care Unit of the Kandy Hospital and was 96 years old at the time of his demise.

The Most Ven. Thera was instated as the 21st Mahanayake of the Asgiriya Chapter on May 8 last year. He was born on January 11, 1922 and ordained in the year 1936. His higher ordination was in 1941.

The cremation ceremony of the late Thera is to be held on March 13 in full state honours, and the day has been declared a National Day of Mourning.

Meanwhile, the annual Big Match between Trinity College and St. Anthony’s College, Kandy, originally scheduled for March 11 and 12 in Asgiriya, has been postponed.

The Mirihana Superintendent of Police summoned eyewitnesses to the accident which took place last month, involving the vehicle of Minister Patali Champika Ranawaka, and which resulted in severe injuries being caused to 24-year-old Sandeep Sampath.

The eye witnesses were summoned to give their statements to the police on Monday (7).

Senior DIG of Western Province, Pujith Jayasundera, told media that two separate investigations into the accident are underway by teams assigned by IGP N.K. Illangakoon. He said another inquiry related to the incident was being conducted by Thalangama Police.

A statement from the Minister is also to be recorded.

He said that he had informed UNP leader Ranil Wickremasinghe, party Chairman Malik Samarawickrema, and Party Secretary Kabir Hashim by late January about his intention to resign from the CPC, but since they had failed to notify the CPC, he had decided to hand over his resignation letter.

He also said that he had resigned as a member of the Board of Directors of the Indo-Lanka Foundation, and informed the Elections Commissioner about his resignation from the CPC.

Parliament was informed on Wednesday (9) of a study carried out for the framework on the proposed Economic Technological Cooperation Agreement (ETCA) to be signed with India.

The study was conducted by the Institute of Policy Studies (IPS), an organisation spearheaded by Dr. Saman Kelegama, who is also adviser to the Lankan Government on the ETCA.

Chief Opposition whip Anura Kumara Dissanayake had charged that it was unfair that IPS carry out the study to establish the framework of ETCA, while Dr. Kelegama remains chief adviser to the Government on the same matter.

Minister of Development Strategies and International Trade, Malik Samarawickrama, had in response noted that although Dr. Kelegama was the Chair of the Institute, he was not involved in carrying out the study to establish a framework for ETCA.

The Minister also said that the framework of the ETCA had been sent to India, and that the Government was willing to discuss the framework with all parties, once a response from India was received within the next fortnight.

The Colombo Additional Magistrate has remanded Uduwe Dhammaloka Thera till March 17 over the illegal possession of an elephant calf.

Ven. Uduwe Dhammaloka Thera was arrested on Wednesday by the Criminal Investigation Department (CID). A special police squad deployed by the CID made the arrest, and recorded a statement from the Ven. Dhammaloka Thera.

Previously, Dhammaloka Thera had filed a fundamental rights petition in the Supreme Court citing CID Director B.R.S.R. Nagahamulla and the Inspector General of Police as respondents, pleading Court to stay his arrest.

A silent protest, ‘Occupy the Square‘, took place on Sunday (6) at the Independence Square, against harassment of couples by security officials at public places.

The protest, organised on social media platform Facebook, was in reaction to a video also posted on Facebook, showing a young couple in a heated argument with security officers who claimed that couples could not stay in the area.

Top-secret Islamic State documents have exposed details of the terrorist organisation’s global recruitment programme, after they were leaked by an ISIS defector.

Security services had examined files alleged to contain names, addresses and family contacts of 22,000 jihadist fighters, including a number of British recruits. The documents, initially published by a Syrian opposition newspaper, were later on received by the German intelligence.

The documents supposedly include 23 questions for the recruits, providing insight into their frame of mind. In the documents, ISIS indicates recruitment from many countries, including Syria, Iraq, Tunisia, Libya, France and Germany.

Germany believes the documents could help track down and prosecute those who had joined ISIS and then returned to their home countries.

The Indian Space Research Organisation (ISRO) on Thursday (10) launched India’s own navigation system with the launch of the IRNSS-1F navigation satellite.

Polar Satellite Launch Vehicle (PSLV) C32 on carrying the 1,425kg IRNSS-1F (Indian Regional Navigation Satellite System) lifted off from the second launch pad at the Satish Dhawan Space Centre in Sriharikota at 4.01pm. ISRO delayed the launch by one minute to avoid a possible collision with space debris.

IRNSS-1F is the sixth of seven satellites belonging to India’s own navigation satellite network.

The satellite will take ISRO to the threshold of securing an independent regional navigation satellite system like the American Global Positioning System (GPS).