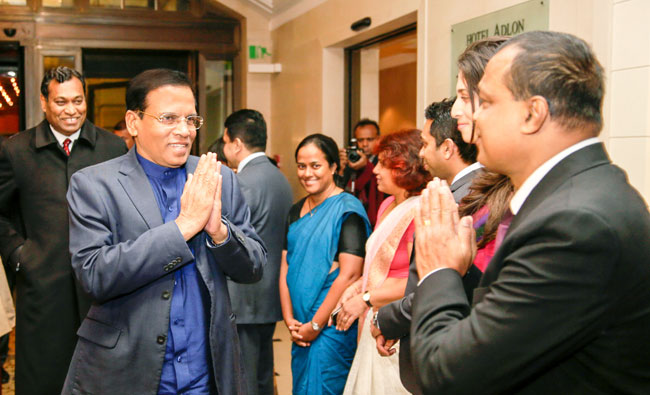 This week witnessed protests over destroyed homes, a new low for the stock market, and the landing of Google Loon’s first trial balloon in Sri Lanka. In international news, deadly bombings hit Turkey, while the US Presidential race took an unexpected turn when Pope Francis had his own opinions to offer.

Read on to find out more.

Protests Over Destruction of Homes

Residents of Ferguson Road, Thotalanga, began a series of protests earlier this week, alleging that the Urban Development Authority (UDA) had demolished their homes without prior notice.

On Tuesday (16), angry residents of Kajeema Watte on Ferguson Road protested on the Japan Friendship bridge, causing heavy traffic congestion. Protesters claimed that over 300 families had been forcibly evicted, and their homes destroyed by backhoes and bulldozers.  On Wednesday (17), residents even took to lying on the road in protest.

The Government however maintained that the houses demolished were unauthorised structures, and that prior notice had been issued for residents to vacate their houses.

Furthermore, Minister of Megapolis and Western Development, Patali Champika Ranawaka, told local media this week that new houses were being provided as compensation.

He later also informed representatives of the Thotalanga settlers that the UDA was carrying out operations in a fair manner, and that the original owners of the houses that were demolished, were offered a new house as compensation. The problem here, however, was that many of the residents who lost their homes were not the homeowners, but resided on rent.

One of Google Loon’s trial balloons landed in Lanka this week. Pictured here is a balloon launch from some months ago. Image Credit: Google

Google Loon, the balloon-powered high speed internet venture that created a buzz last year, has officially started testing in Sri Lanka. One of the balloons being used in trials entered Sri Lankan airspace on Monday (15), and landed in the hill country yesterday (18), according to media reports.

The balloon that reached Sri Lanka is one of three balloons that were earlier launched in South America.

Local media reports said that the balloon reached Sri Lankan land in a “controlled descent”, but a Times of India report claimed otherwise. According to the ToI, who claimed to be quoting local police, the balloon had “crashed in a Sri Lankan tea plantation during its maiden test flight.”

Earlier this month, the Government had announced a 25% stake in this joint venture with Google, to offer high speed internet via the helium-filled balloon project.

Reuters reported that CSE shares fell for a ninth straight session Thursday, to hit the lowest close in nearly 22 months.

Concluding his visit to Germany, the President departed for Austria, where he is currently on a two day official visit.

A Look At Lasantha’s Killers

Police have called for public assistance in tracking down two suspects in the Lasantha Wickrematunge assassination.

Earlier this week, Police released sketches of two suspects believed to be responsible for the assassination of Sunday Leader editor, Lasantha Wickrematunge, whose January 2009 murder is still under investigation.

Lalith Kotelawala and wife Sicille Kotelawala, who have long since been accused of financial fraud in connection to the Golden Key controversy. Image Credit: asianmirror.lk

Sicille Kotelawala, wife of former Ceylinco Chairman Lalith Kotelawala, was ordered to be placed in remand custody till February 23, when she is to be produced in High Court, to be tried in connection to the Golden Key controversy.

Nine warrants had been issued for the arrest of Sicille Kotelawala, who is believed to have been in hiding abroad all these years. She was however detained earlier this month upon her arrival at the Bandaranaike International Airport, and was subsequently admitted to the National Hospital.

An explosion in Turkey’s capital city, Ankara, killed 28 and injured 61 on Wednesday. The explosion is believed to have been caused by a bomb-laden vehicle. The bombing, which occurred near Turkish Parliament and military buildings, hit three military vehicles and a private vehicle.

A day later, six Turkish soldiers were killed and another injured in a roadside bombing that hit an armoured military vehicle in the south-eastern Turkish province of Diyarbakir.

Turkish leaders have blamed Kurdish groups for the attacks, and latest reports have confirmed the arrests of 14 suspects.

Trump has reportedly called the Pope’s comments “disgraceful” and has also claimed that the Pope should hope Trump were President “if and when the Vatican is attacked” by terrorist forces.

Earlier this week, Pope Francis had said that GOP front-runner Donald Trump “is not Christian” if he calls for the deportation of undocumented immigrants, and pledges to build a wall between the United States and Mexico.