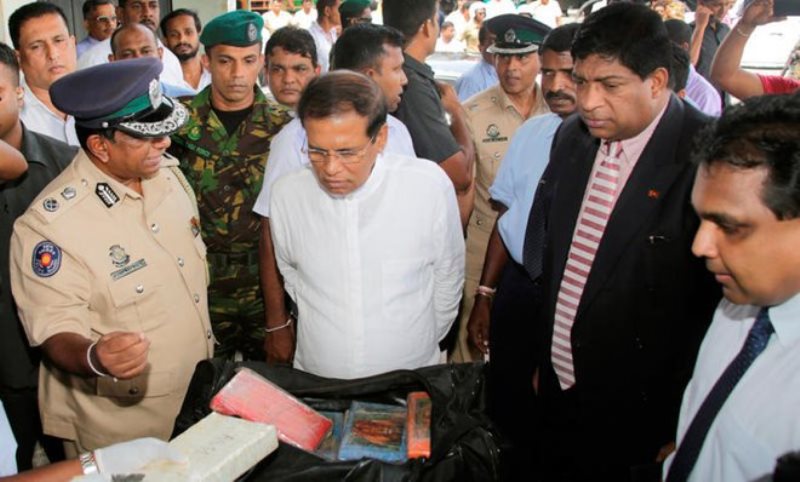 In news this week, law enforcement busted what is believed to be Sri Lanka’s largest cocaine haul in recent times. Meanwhile, two veteran politicians passed away, while a prime suspect in the Wasim Thajudeen case has been hospitalised.

The largest cocaine haul in the country’s most recent history was seized in a joint investigation carried out by the Sri Lanka Customs and the Police Special Task Force (STF) on Tuesday (14), at the Orugodawatta Container Terminal Yard.

President Maithripala Sirisena and Minister of Finance Ravi Karunanayake were also present at the opening of the container which included the massive cocaine haul.

The shipping container from Brazil contained a total of 91 kilograms of cocaine with a street value of around Rs. 2 billion. A leading sugar importer and two assistants have been arrested and are under interrogation by the STF connection to the cocaine haul. However, the suspects were later handed over to the Police Narcotic Bureau for further inquiries.

FCID To Be Disbanded?

The entrance to the Financial Crimes Division Headquarters in Kollupitiya. Image credits: dailynews.lk

Although this is not the first time such stories did the rounds, government officials denied the decommissioning of the FCID. Parliamentary Reforms and Mass Media Deputy Minister Karunarathna Paranavithana rejected the news, saying that the tenure of the division will be extended by at least six months.

State Minister of Defence, Ruwan Wijewardene, had told Newsfirst that the ultimate decision of decommissioning the FCID lies in the hands of the President and the Prime Minister.

Meanwhile, speaking at the weekly Cabinet press briefing, Co-Cabinet Spokesperson Rajitha Senaratne said that the FCID will be replaced by “a more powerful and permanent Bureau with a mandate to investigate financial crimes.”

Former Janatha Vimukthi Peramuna (JVP) leader and General Secretary/Founder of the People’s Servants Party, Somawansa Amarasinghe passed away at the age of 73 on Wednesday (15).

The Leader of the Last Left of the country had passed away in his sleep after a stroke, while at his brother’s residence in Rajagiriya. The final rites for Amarasinghe will take place on Saturday (18).

The late Alavi Moulana, who also passed away this week. Image credits: itnnews.lk

His funeral took place on Thursday (16).

The suspect in the controversial Wasim Thajudeen case was arrested and remanded over concealing evidence. He is currently receiving treatment for a kidney-related complication at the Sri Jayawardenepura Hospital.

The case will be heard again on Thursday (23).

The second reading of the Right to Information Bill will take place at Parliament on June 23, according to Co-Cabinet Spokesperson and Parliamentary Reforms and Mass Media Minister Gayantha Karunathilaka.

Speaking at the weekly Cabinet media briefing on Wednesday (15), Karunathilaka and Deputy Media Minister Karunaratne Paranavithana said that the Bill is expected to be passed with very little opposition.

Vigils were held across the US as well as in other parts of the world, in memory of the victims of the mass shooting at a gay nightclub in Orlando, Florida. Image courtesy CNS/Mark R. Cristino, EPA

Fifty people were killed and another fifty-three injured when Omar Mateen, 29, opened fire inside a gay nightclub in Orlando on Sunday (12).

This is believed to be the most fatal mass shooting by a lone gunman and the worst incident of violence against the LGBT community in the U.S. history. It is also considered the deadliest terrorist attack in the U.S. since the September 11 attacks in 2011.

An IT tech worker at Mossack Fonseca, the offshore law firm at the centre of the Panama Papers scandal, was arrested on Wednesday (16).

The person arrested is yet to be named, while the exact charges of arrest have also not been revealed. German newspaper, Süddeutsche Zeitung, which initially received the leaked information, tweeted saying that they do not believe the arrested individual is the anonymous whistleblower.