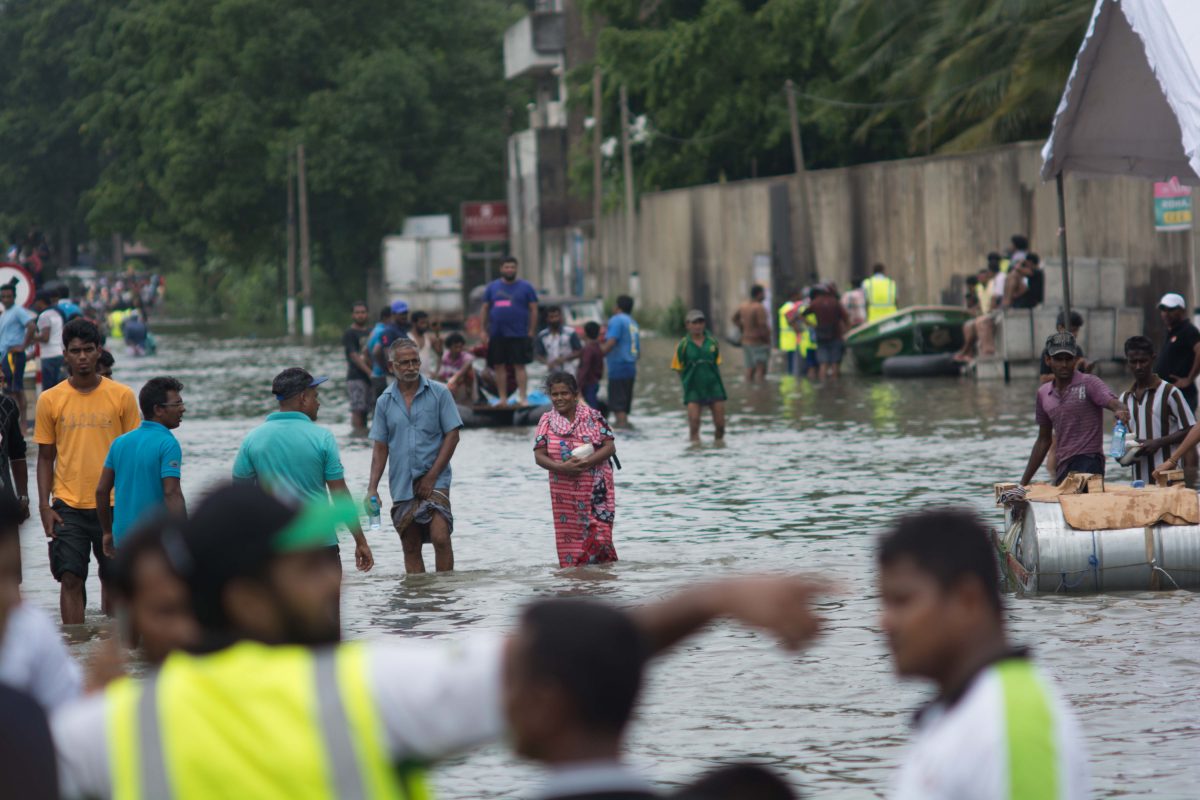 After months of sweltering heat, the incessant rains ought to have been a welcome relief, but things have taken a more sombre turn this week. Although floods and landslides occupy most newsfeeds, there’s still more going on both in Sri Lanka and elsewhere, so here’s a roundup of the hottest stories, as well as current affairs you may just have missed.

Sri Lanka this week recorded some of the highest rainfall in the country. Kilinochchi experienced a rainfall of over 300 mm, in just 24 hours — a quarter of the area’s typical annual rainfall.

On Wednesday, the water levels of the Kelani river rose up to 7.6 metres. The water levels kept fluctuating, and as of 4:00 p.m. today (20), the Ministry of Irrigation said it was at 7.4 metres.

The ships were received by the Sri Lankan Navy.

Over hundreds of people in the areas of Kolonnawa were left immobile due to the floods with no means of leaving the area. Sources stated that individuals with makeshift rafts had been rescuing stranded families and individuals in the area, while the military forces had not been reachable.

On Monday (16), the Parliament premises were temporarily flooded thanks to an overflowing Diyawanna Oya.

Updates keep streaming in, so stay in touch with Roar’s Live Blog on the current flood coverage here.

The search is still on for over a hundred people missing after the deadly landslide in Aranayake, Kegalle, on Wednesday (18). According to Army Media Spokesperson, Brigadier Jayanath Jayaweera, a total of 19 bodies have been recovered till now.

A proposal made by Justice Minister Wijeyadasa Rajapakshe, to amend the Penal Code on the minimum age for criminal responsibility to 12, has been approved by the Cabinet of Ministers.

The age of criminal responsibility is the age below which a child is deemed incapable of having committed a criminal offence. In legal terms, it is referred to as a ‘defense of infancy’.

While addressing the Cabinet briefing on Wednesday (18), Mass Media Minister Gayantha Karunathilaka had said that in the case of a child aged between 12 and 14, Magistrates could use their discretion to decide on whether criminal responsibility could be assigned.

The current Penal Code precludes a child under the age of eight from being prosecuted for an offence. However, internationally, the minimum age of criminal responsibility varies from ages twelve to fourteen.

Following recommendations made by the Prime Minister’s Security Division, two new blast resistant vehicles are to be added to the Premier Ranil Wickremesinghe’s motorcade.

The recommendations had stated that the current vehicles used by the Prime Minister are not in a good enough condition to withstand any threat. The PM’s office has decided to purchase two bullet and explosion proof vehicles for the Prime Minister’s usage at Rs. 128 million. The Government’s tax expenditure for the purchase is Rs. 368 million.

The matter was questioned by Chief Opposition Whip, Anura Kumara Dissanayake, to which Minister of Law and Order, Sagala Ratnayake, replied via a press release on Saturday (14).  .

A 20-year-old youth who was abducted in Wariyapola and held for ransom was rescued by the Police on Sunday (15) morning, and two suspects were arrested.

The victim, Mohammad Aasif, was seen last Thursday (12), leaving a shop owned by his father, approximately 700 metres away from the place where he was abducted.

An area resident had reportedly heard Aasif screaming for help, and had also witnessed a white car speeding towards Malwatta road. However, the car had reportedly left by the time the witness had rushed to help.

Following this information, the police were able to arrest two individuals who revealed the identities of those involved in the kidnapping. The subsequent police operation which was carried out was able to locate the abducted youth at a house in the Nikaweratiya town.

The suspects who kidnapped the boy on Thursday night had made several phone calls to his father and brother, threatening to kill him if a ransom of Rs. 20 million was not paid.

Sri Lankans Aiming For Top Of The World

Sri Lankan mountaineers Johann Peiris and Jayanthi Kuru-Uthumpala are on the verge of reaching the world’s highest peak.

They will go down in history as the first Sri Lankans to have climbed Mount Everest, when they complete the final leg of the climb this month. Speaking to Roar, Johann and Jayanthi said that they have reached the final stage of the expedition, and provided favourable weather conditions, they will reach the Everest summit in the final week of May.

Johann and Jayanthi have been avid mountaineers for many years, and have previously climbed Mount Kilimanjaro in Tanzania, and the Island Peak (Imja Tse) in Nepal.

Mount Everest is located between Nepal and Tibet and is 8,848 meters or 29,029 feet above sea level. No Sri Lankan has ever reached the summit before.

EgyptAir flight MS804 from Paris to Cairo, which was reported missing yesterday (19), was later confirmed to have crashed.

The Airbus A320 left the French capital’s Charles De Gaulle airport at 11:09 p.m. local time on Wednesday (18) night, and then disappeared off radar shortly before it was due to land in Egypt. It was supposed to arrive at 3:05 a.m. Egyptian time. There were 56 passengers, including three children, and 10 crew on board.

The plane disappeared 80 miles (10 minutes) before it was set to enter Egyptian airspace at 37,000ft.

Egyptian authorities have sent ships to scour the sea where the plane last contacted the Egyptian air traffic control. There had not been any distress call from the plane prior to its disappearance.

The General Election to Legislative Assembly commenced with the polling on Monday (16). On Thursday (19) the final results of the General Election streamed in with Prime Minister Narendra Modi’s Bharatiya Janata Party (BJP) in lead only in one State.

Assembly elections were held in Tamil Nadu, Kerala, West Bengal and Assam and in the union territory of Pondicherry.

In West Bengal, the regional Trinamool Congress party led by Chief Minister Mamata Banerjee is poised for a second term in power. Her party is leading in 217 of the 294 seats, while a rival alliance of the Congress and left-wing parties is ahead in 70 seats.

In Tamil Nadu, the regional AIADMK has secured a lead in 129 of the 234 seats, while its nearest rival, the DMK, is leading in 90 seats. AIADMK leader Jayalalithaa in an early victory speech said that she is indebted to the people of Tamil Nadu for the election victory.

In Kerala, which has been traditionally ruled by either Congress-led governments or a coalition of left-wing parties, the Communist Party of India (Marxist) is leading in 57 of the 140 seats, while the ruling Congress is ahead in 21 seats.