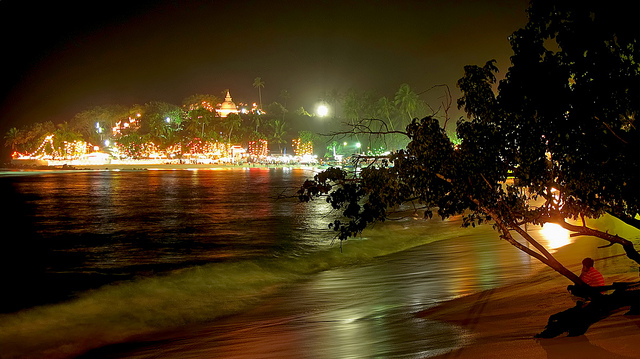 Although events on social media may suggest otherwise, Sri Lanka ushered in the New Year with relatively less drama and  tension than we did at the end of 2014. The same can’t be said for the rest of the world however, where terror alerts, fires and mining accidents got in the way of New Year’s celebrations.

Enrique Concert: From Bra to Blacklist

In what must be the one news story that most of Sri Lanka is familiar with by now, the aftermath of the Enrique concert issue has taken a new turn.

According to the Daily News, Mayor of Colombo A.J.M. Muzammil has blacklisted the organisers of the concert for alleged tax evasion.

Earlier this week, President Maithripala Sirisena was the target of much internet censure when he openly criticised the organisers of popular Latin Pop Singer Enrique Iglesias’ concert, that took place in Colombo on December 20.

The President, speaking at a public gathering on Sunday (27), was infamously quoted as saying “organisers of such concerts where young women fling their undergarments to the international artistes, should be whipped for directly endangering the country’s culture, decency and decorum.” He added that immediate strict action will be taken against the organisers of the event.

Heads of Live Events, popular retired cricketers Mahela Jayawardene and Kumar Sangakkara, posted an official statement on Sunday (27), apologising to fans for the inconvenience they endured during the concert.

Addressing the issue of entertainment taxes, their Facebook post also claimed that the organisation would remain “transparent and ethical” in their operations, and will “continue to ensure full compliance with all relevant tax commitments and is providing all necessary information to the Colombo Municipal Council.”

No Photos in Sigiriya

The Central Cultural Fund has imposed a temporary ban on photographing frescoes at the World Heritage site Sigiriya, effective from Wednesday (December 30).

The decision to impose the ban had come from the Department of Archeology, due to recent findings which stated that the flash light emitted by cameras damages the 1600 year old paintings.

UNP MP Hirunika Premachandra was recently dragged into the limelight in relation to a kidnapping case. Image Credit: asianmirror.lk

The UNP this week promised disciplinary action against MP Hirunika Premachandra, if her alleged involvement in the kidnapping of an individual in Dematagoda is proven.

Assuring a fair investigation into the matter, UNP General Secretary, Minister Kabir Hashim said that Premachandra would be arrested if police investigations disclose any evidence against her.

Two more individuals were arrested in the Dematagoda abduction case after they surrendered to the police.

People living near the Meethotamulla garbage dumpsite commenced a protest on Sunday (27), which later came under attack by a group of people led by the Chairperson of the Kollonnawa Urban Council.

Several people, who sustained injuries following the attack, were  admitted to the Colombo National Hospital.

A fire broke out in the 63-storey Address Downtown Hotel in Dubai on New Year’s Eve, engulfing the building in flames and causing a stampede as people fled.

Although eleven people have been rescued, seventeen more are believed trapped by the rubble. Chinese media has reported that there are currently four known survivors awaiting rescue.

The survivors had been detected earlier by infrared cameras. Rescue teams are yet to reach the survivors, but food and supplies have been sent, while the fate of the other miners remains unclear.

Major cities in Europe decided to increase their security ahead of New Year celebrations due to several possible terror plots.

According to BBC, cities such as Brussels and Paris cancelled the use of fireworks for New Year’s Eve celebrations. In Russia, capital city Moscow cordoned off the Red Square by midnight.

Meanwhile, two suspected Islamic State members were arrested on Wednesday in Turkey over an alleged plot to attack celebrations in Ankara.

Here’s wishing our readers a very happy 2016! Catch up with us every Friday as we bring you your weekly news fix.