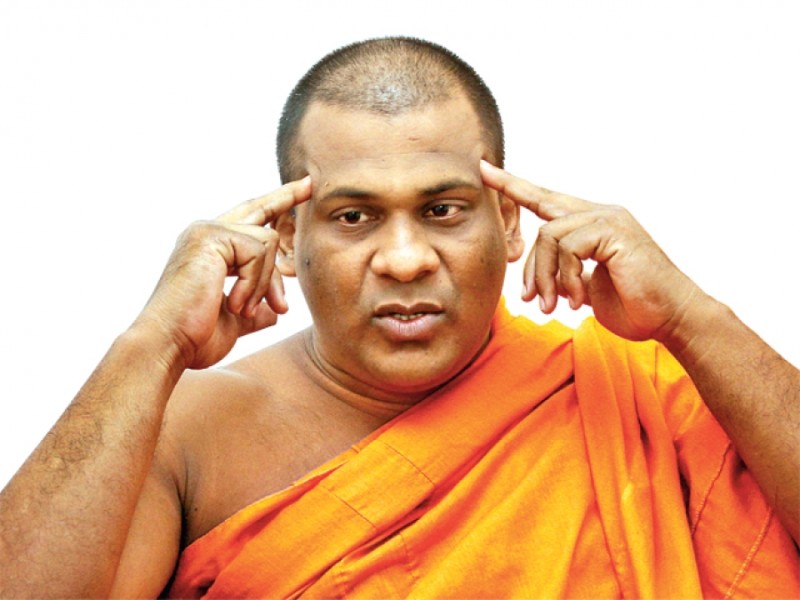 A tense situation erupted this week, after Bodu Bala Sena (BBS) General Secretary Ven. Galagodaaththe Gnanasara Thera was charged with a number of offences, including contempt of court.

On Tuesday (26), a group of Buddhist monks stormed the court premises of the Homagama Magistrate in a protest demonstration. Some of the monks attempted to enter the Court premises by scaling the perimeter walls. There were even reports of monks threatening self-immolation.

The clash between the Buddhist monks and the police officers escalated once the police deployed officers of the Riot Squad to disperse the protest.

Gnanasara Thera was ordered to be held in remand till February 9, and although a bail application was filed on his behalf on Wednesday (27), Court yesterday rejected the application.

He was, however, reportedly admitted to the Prison Hospital on Wednesday due to certain medical complications.

Meanwhile, the Homagama Magistrate on Wednesday ordered all suspects behind the stir at the Court premises on Tuesday be arrested and produced in Court.

Police informed Court that charges such as contempt of Court, unlawful assembly, unlawful entrance, causing damage to State property, causing physical harm to State officers and unlawful behaviour have been brought against the suspects.

Suspicious motives surround the arrest of two girls by Avissawella Police earlier this week. According to media reports, the girls had been arrested on grounds of their sexual orientation.

The Police Department, in its statement to the media, said that they had received information from several three-wheeler drivers, who accused the arrested duo of being lesbians, or in a lesbian relationship. Initially, Police claimed that the couple had arrested for “indecent behaviour” at a public area.

However, Police later revealed that one of the two girls had been arrested for the alleged abduction of the other, who is underage. One of them is believed to be nineteen years old, and the other fifteen.

The Bar Association of Sri Lanka (BASL) has appointed a committee to look into the matter.

Avant Garde is back in the news. Image Credit: newsfirst.lk

He said that this money was for the security services provided by the Navy, for AGMSS’s controversial armoury, while ownership of the armoury was still under Avant Garde.

Responding to questions at a press briefing, Hettiarachchi added that the Navy has already lodged an official complaint at the Criminal Investigation Department, and also given evidence regarding the due sum.

Meanwhile, the Presidential Commission of Inquiry to Investigate and Inquire into Serious Acts of Fraud, Corruption and Abuse of Power, State Resources, and Privileges (PRECIFAC) is expected to commence an inquiry into a large quantity of weapons belonging to Avant Garde, which was produced in Belgium and is currently stored at the Katukurunda STF Camp.

The PRECIFAC inquiry will look into the allegedly problematic purchase of this stock of weaponry.

The decision to commence investigations came after a request was made by Director General of Health Services, Dr. Palitha Mahipala. Dr. Mahipala wrote to the Inspector General of Police, requesting a probe into the alleged involvement of six Sri Lankan medical officers alleged to be involved in the racket.

In accordance with this order, former Embilipitiya ASP, D.W.C. Dharmaratne, and former HQI, Dinendra Dias, were to be arrested by the CID.

Prasanna succumbed to injuries sustained from a fall at a house party, after allegedly being assaulted by police who had stormed the party.

Finance Minister Ravi Karunanayake revealed that a new fuel price formula will be submitted to the Cabinet next week.

Speaking at a media briefing on Wednesday, the Finance Minister said the new mechanism is supposed to help introduce stable prices for fuel for several years, without subjecting prices to frequent fluctuations. He said the Government would follow the system in Singapore or Dubai when formulating this new mechanism.

The Zika virus, which causes brain defects in babies, could affect up to 4 million people.
Image Credit: foxnews.com

According to predictions made by the World Health Organization, three to four million people could be infected with Zika virus in the Americas this year.

Most cases will not develop symptoms, but the virus, spread by mosquitoes, has been linked to brain defects in babies. According to foreign media reports, the United States hopes to begin human vaccine trials by the end of 2016.

Meanwhile, Sri Lankan authorities have also commenced screening of all air passengers arriving from South America and Africa at the Bandaranaike International Airport, for the Zika virus.

The news of the unconfirmed launch ‒ of what has been speculated to be either a satellite or a space vehicle ‒ came on Thursday (28).

This comes as the UN Security Council discusses imposing fresh sanctions against North Korea after it conducted a fourth nuclear test on January 6.

Pyongyang said it had successfully tested a hydrogen bomb, but nuclear experts have questioned the claim, saying the blast was not large enough.

Germany plans to cut down on numbers of asylum seekers it accepts. Image Credit: bbc.com

Germany, in an attempt to curb the growing numbers of incoming asylum seekers, has decided to add Algeria, Morocco and Tunisia to its list of ‘safe countries’. Nationals from these countries would now be unlikely to be granted asylum.

The move is part of new measures aimed at tightening rules in a country which last year received more than 1.1 million asylum seekers.

Meanwhile, Sweden has reportedly said that it could deport up to 80,000 asylum seekers in the coming years.