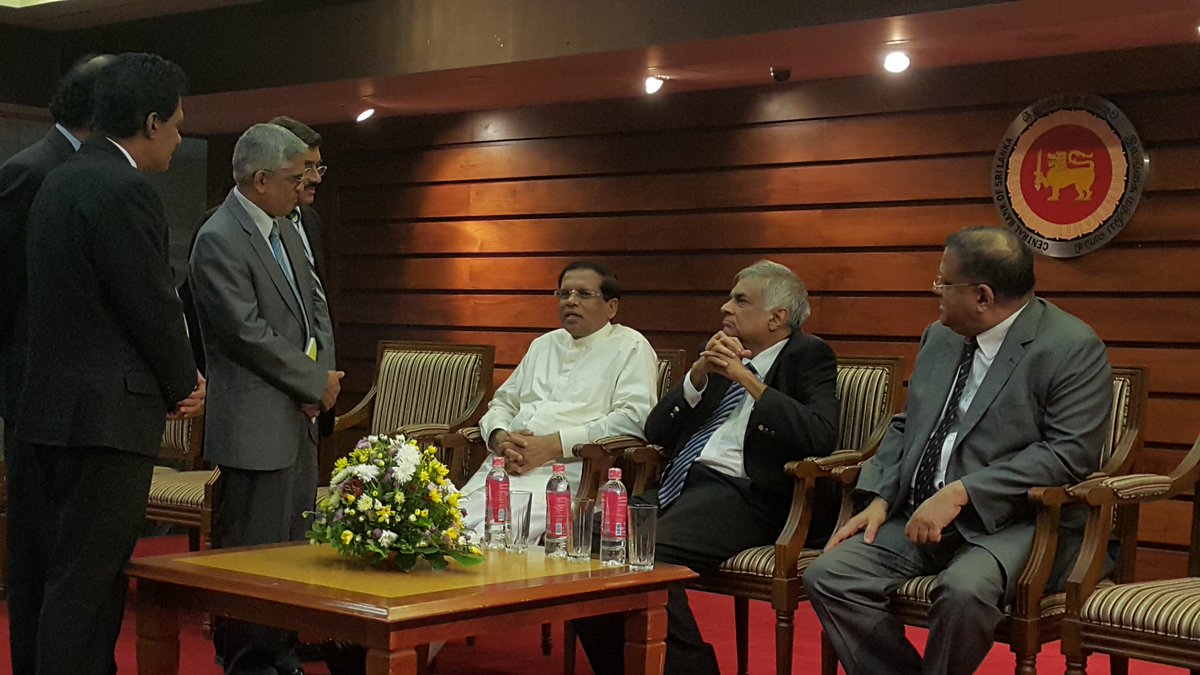 The Central Bank Governor received a lot of attention in local media this week, while in foreign news a deadly terrorist attack on a Turkish airport, and the aftermath of the Brexit referendum take centre stage. As we ease into the month of July, here’s the week in news:

This week witnessed much speculation over the possible appointment of a new Governor to the Central Bank. With Governor Arjuna Mahendran’s tenure drawing to a close, several reports surfaced on the issue of the Central Bank bond scam that entered the spotlight last year, and Mahendran’s alleged involvement.

But much to the chagrin of many, the Prime Minister’s Office has stated that a new Governor will not be appointed until Finance Minister Ravi Karunanayake is present. Karunanayake is currently in China participating in the Asian Infrastructure Investment Bank’s annual conference.

Wednesday (29) saw the controversial Auditor General’s 1,257 page report being submitted to the Committee on Public Enterprises (COPE). With that, speculations arose of the appointment of a new Central Bank Governor, replacing Arjuna Mahendran.

Following this, the COPE had demanded Mahendran’s presence at the next committee meeting on July 7. The COPE will be convening on July 5 to discuss the AG’s report.

Addressing a gathering on Wednesday, President Maithripala Sirisena promised that he would appoint a new Governor to the Central Bank “within a few hours”. However, following his visit to the Central Bank later that day, his statement remained futile as no new appointment was made.

The tenure of Arjuna Mahendran as the Central Bank Governor expired yesterday (30).

Meanwhile, Prime Minister Ranil Wickremesinghe has received criticism for allegedly “protecting” Mahendran. Addressing the media, he had stated that the allegations against Mahendran should be proven in order for the Government to take action against him.

Speculation was rife as to who would be appointed as the new governor, or whether Mahendran would be reappointed, regardless of the PM’s reassurance that this will not happen.

Former Deputy Governor of the CBSL, W. A. Wijewardena, Professor of Finance Lalith Samarakoon, Deputy Governor of CBSL Nandalal Weerasinghe, Executive Director of the Institute of Policy Studies Saman Kelegama, and Chairperson of the National Human Resource Development Council, Dinesh Weerakkody, have been surmised for the seat.

The first reports of the Central Bank bond scam were revealed in February 2015. Perpetual Treasuries, a company owned by CBSL Governor Mahendran’s son-in-law Arjun Aloysious, was accused of insider trading in February.

The Rs. 10 billion debt accepted by the CBSL at a bond auction was vastly in excess of the Rs. 1 billion amount that had earlier been communicated to the primary dealers who would be bid at the auction. Following this, the Central Bank denied allegations of bond auction rigging, after which anti-corruption activists claimed that the controversy was not being sufficiently addressed.

United Nations High Commissioner for Human Rights, Zeid Ra’ad Al Hussein this week presented an oral report commending the progress of Sri Lanka with regard to the efforts taken by the Government to address reconciliation issues. However, he did also make note of issues that are yet to be addressed.

Presenting the report to the United Nations Human Rights Council on Wednesday (29), Al Hussein raised certain concerns regarding the slow progress of releasing military occupied land in the North over to civilians, as well as the failure to abolish the Prevention of Terrorism Act.

In the report, the High Commissioner urged the Council to provide Sri Lanka with more time to show progress in several areas.

However, the current Government had ruled out the participation of foreign judges in the inquiry but have said it would be impartial.

Sri Lanka’s inflation rate appears to be on the rise. Image courtesy Department of Census and Statistics.

Sri Lanka’s inflation has increased to 6 percent in June from 4.8 percent in the previous month, according to the Department of Census and Statistics.

The Department, issuing a press communique on Thursday (30), stated that the inflation rate for the month of June 2016 is the highest recorded since 2013.

Since June 2015, the inflation rate had been fluctuating between 0.1 percent and 1.7 percent. However, last November saw a sudden spiked to 3.1 percent, which was then again topped by last month’s inflation rate.

Three leading boys’ schools have been issued bans on playing rugby due to unruly behaviour displayed at recent sporting events.

Dharmaraja College and Trinity College in Kandy, and Carey College in Colombo, have each been issued a nine-month ban with a probation period of two years, by the Education Ministry.

Dharmaraja College was banned from the rugby arena for their unlawful behaviour during the game against St. Joseph’s’ College in Bogambara last year.

Carey College has been given a six-month match ban following the altercation between the school and the Padukka Sri Piyarathna College last month.

The Trinity College ban comes two months after an incident that occurred at the Pallekele Stadium during the awards ceremony of the 72nd Bradby Shield encounter, where a brawl which broke out among players spilt over to the crowd.

A gun and bomb attack on Istanbul’s Ataturk International airport on Tuesday (28) evening has killed 44 individuals and injured over 140 others.

Foreign media reports stated that three attackers opened fire near an entry point to the terminal and blew themselves up after police fired at them. Turkish Prime Minister Binali Yildirim said early signs suggested the so-called Islamic State (ISIS) was behind the attack.

As of now, the bombings have been linked to either ISIS or Kurdish separatists.

Pictures of the airport terminal after the attacks show bodies covered in sheets, with glass and abandoned luggage scattered through the building.

Turkish President Recep Tayyip Erdogan told media that the attack should serve as a turning point in the global fight against militant groups.

The US has termed the attacks “heinous”, and stated that America remained “steadfast in our support for Turkey”.

Footage on social media shows one of the attackers running through the airport’s departures terminal,  while people around him flee. After being by police, he remains on the ground for about 20 seconds before blowing himself up.

Flights in and out of the airport were suspended after the attack. The US Federal Aviation Administration initially grounded all services between the US and Istanbul but the stoppage was later lifted.

The winner of the contest will be announced on September 9.

Justice Secretary Gove said on Thursday (30) he chose to run for the Conservative Party leadership after deciding “reluctantly but firmly” that Boris Johnson was not capable of uniting the party or the country.

Nominations for the Conservative Party leadership closed at midday on Thursday, with Leave campaign leader Johnson having to bow out of the race due to Gove’s decision.

The five contenders have until Tuesday (2) to build support among the 329 Conservative MPs before the first round of voting. The MPs with the fewest votes will be eliminated, one at a time, until two remain. They will then go to a vote of the wider party membership.