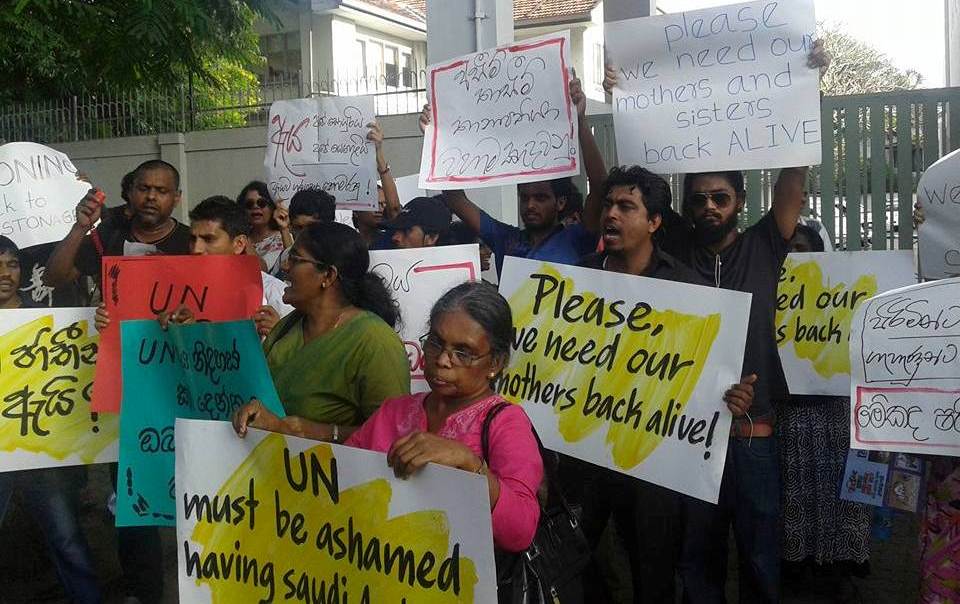 Last week President Maithripala Sirisena flatly rejected a proposal to amend the age limit for Sri Lankan women seeking work as housemaids in the Middle East (ME).  The cabinet paper put forth by the Minister for Foreign Employment, Thalatha Athukorala, if approved would have brought down the age limit for women seeking foreign employment from 25 to 22. But the President was not pleased.

“He was of the view that we shouldn’t encourage more women to seek work as domestics and maids overseas,” Minister Athukorala told Roar, citing that the President mentioned he was well aware of the anguish the families face.

Increase in the number of rights abuses, social costs due to rape, drug addiction, child abuse among families that have been left behind, and the shortage of labour locally, were some of the talking points at a meeting at which the proposal was discussed. It was also argued that if the age limit was relaxed, more women would be motivated to go overseas, setting a dangerous precedent.

The Government in January 2013 decided that it would limit the number of women going to Saudi Arabia after the beheading of Rizana Nafeek. Rizana’s case drew an outpour of ire after pleas for clemency from the Government and human rights groups were denied. Rizana was convicted by a Saudi court for killing her employer’s child in 2005. Rizana and her lawyers maintained that the infant who was bottle-fed had choked to death.

It was after this that the minimum age was raised so that women under the age of 25 would be deterred from going to work as maids in Saudi Arabia. Studies show that around 90% of the total migrant workforce, were maids leaving to the Middle East. Out of the ME region, KSA, Qatar, Kuwait, and UAE accounted for 80.6%  in 2010.

In 2013 alone, according to the Sri Lanka Bureau of Foreign Employment (SLBFE), 96,934 Sri Lankans left the country to work as housemaids.

“Even though the age limit was set, when we examined unofficial statistics we realised that there was an alarming increase in the number of young women below the age of 25 still migrating to the Kingdom to work as maids,” said Minister Athukorala.

Minister Athukorala admitted that while ‘official’ statistics showed a decline, there was a huge increase over the last few years with many women going overseas by forging documentation, which made it hard to keep track of them.

In a migration profile on Sri Lanka prepared by the SLBFE together with the International Organisation for Migration and the Institute of Policy Studies of Sri Lanka released in 2013, then Minister of Foreign Employment Promotion and Welfare Dilan Perera noted that it was troublesome as a comprehensive report on foreign employment was unavailable.

Huge Fiscal Impact To The State Not Well Studied

A majority of Sri Lanka’s migrant workforce is made up of housemaids leaving to the Middle East. Image credit: ips.lk

“This neglect is troublesome as foreign employment is by far the dominant sub-economy, its impact having significant economic and social consequences,” Minister Perera had said. “The 1.7 million foreign workers form 24% of our labour force, and remittances form 8.3% of our GDP. Foreign employment is drawn from the rural poor where remittances flow directly to it. These economic flows have knock-on effects on rural wages while having enormous social consequences, which have not yet been comprehensively studied,” he said.

When President Sirisena rejected the proposed cabinet paper, he also appointed a committee to come up with a comprehensive report that will be used as a basis to form a national policy which will see the end to women being sent overseas as maids, at least within the next five years, Athukorala said.

The committee, which will be chaired by Minister Athukorala, will also include Justice Minister Wijeyadasa Rajapaksha, Minister of Labour and Trade union relations W.D.J. Seneviratne, Minister of Women and Child Affairs Chandrani Bandara, and State Minister for City Planning and Water Supply, Dr. Sudarshani Fernandopulle.

The committee is expected to meet early next week and formulate what would be a holistic approach and strategies that will not only deter women from seeking employment as maids, but to create a socio-economic climate where women could work here instead.

The Minister said she has a set of recommendations from the Ministry of Women and Child Affairs which would aid this process, provided that an alternative mechanism was introduced in place of a Family Background Report (FBR).

Minister Athukorala also explained that an individual intending on migrating to the ME in the unskilled labour category had to go through six points where the FBR is checked and approved. “This has become a highly corrupt practice with people taking bribes up to Rs. 150,000 to forge the FBR,” she said.

She added that it was high time an alternative mechanism was introduced so that the FBR can be verified. She had proposed that the individual who wishes to go overseas under this category will need to commit themselves or offer the Bureau a guarantee that their children would be looked after. This, she said, would need to be done through an affidavit. She also added that single parents will be barred from going overseas even if their children could be looked after by the grandparents or siblings of the individual.  These proposals were part of the Cabinet paper which was rejected. The Minister added that the proposal will stand, but the committee will now need to go into extensive deliberations before implementing anything.

Chairman of SLBFE, Rajpal Obeysekera, said that the ultimate goal should be to not only limit the numbers but to deter them from going to the Middle East as maids entirely. “This is not something we can achieve overnight,” he said. “But we must by all means try and get there because it’s important.”

Obeysekera, explaining the rationale for bringing down the age limit, said that over the years, when the Government placed more restrictions barring women from seeking foreign employment, there has also been a spike in fraudulent practices on the part of employment agencies and individuals determined to go abroad.

He referred to the current socio-economic climate in the country, saying that if the numbers were to be reduced, poverty needs to be alleviated and jobs must be provided to retain these individuals who are going overseas on the premise of better-paying jobs.

“Limiting the numbers at once will have grave and serious repercussions on our economy, [and] on the families. There will also be an employment issue which will need to be addressed immediately,” he said. “As such we need to bring all stakeholders to formulate a plan of action that’s productive and pragmatic.”

Could this new committee hold a ray of hope for the thousands of women who continue to leave Sri Lankan shores to work as maids and domestics in the Middle East? Could this be the silver lining to the many destitute families and children who longed to see their parents return? While the news comes as a respite, the report will be crucial in determining the direction the country would take in formulating a national policy.