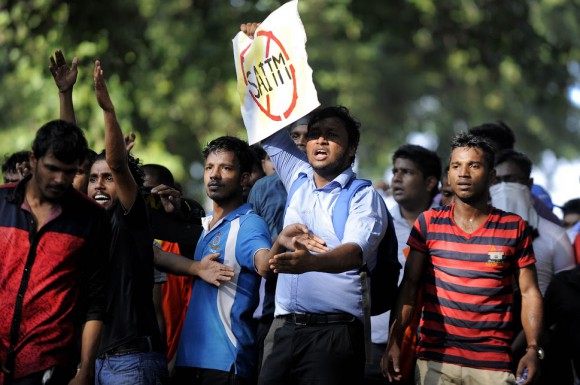 The seemingly endless SAITM saga is now at a crossroads with the Government and the Government Medical Officers Association (GMOA) locked in an apparent stalemate, unable to agree on what the next move ought to be.

Yesterday (June 27), the UNP and the SLFP, the two constituent parties of the Yahapalana Government, set aside their growing political differences for a moment to put up a united front in the face of rising public resentment and strong trade union action from the GMOA as well as increasingly violent protests from the Inter University Student Federation (IUSF).

Speaking to the media, Ministers Kabir Hashim and Duminda Dissanayake, the General Secretaries of the UNP and SLFP, respectively, offered three possible solutions to the crisis—based on a statement previously made by President Maithripala Sirisena. In his statement, the President had promised to issue a gazette notification prohibiting the controversial private medical college (PMC) from enrolling new students and awarding degrees to existing undergraduates until and unless some conditions were fulfilled. The proposed solutions are:

“The idea is to select the best option. It will be studied further before a final decision is made,” said Minister Hashim.

The conditions to be spelt out in the impending gazette notification will be decided upon discussion with all stakeholders, said Hashim, reiterating that until those conditions are met, SAITM will not be allowed to recruit students or award degrees.

According to the statement issued by the President, the promised gazette notification will include the following:

-Admission of students to SAITM and offer of degrees will be stopped until the SAITM will fulfil relevant conditions of the government’s gazette.

-No institute and person should influence the autonomy and the impartiality of Sri Lanka Medical Council (SLMC).

-Formation of current courses of SAITM according to a method accepted by the SLMC and forming a system to register the degrees which have already been offered.

-Informing the government’s position about the SAITM, to the Supreme Court. (sic)

Meanwhile, a Cabinet paper by Health Minister Rajitha Senaratne proposing the nationalisation of the Neville De Silva hospital—attached to SAITM—in Malabe was approved by the Cabinet of Ministers yesterday, with the objective of converting it to a state teaching hospital.

We Didn’t Start The Fire

Conceding that SAITM has been mired in legitimate concerns since its establishment, Minister Hashim said that when the controversial institute was first approved by the previous government, those declaring war on the government today could’ve done something to put a stop to it before it escalated.

“Any opposition to SAITM could’ve been expressed when SAITM was established, and the problem could’ve been resolved right then and there. Now it’s become this big thing, because those with vested interests waited till now to gain political mileage out of the issue,” he said.

“There were shortcomings when SAITM began, yes. When the new government came into power in 2015, we inherited this problem. All these issues were already there. None of this started on January 8, 2015. But here we are, trying to resolve it without damaging the students or the country’s medical system,” he added.

The Minister blamed the ongoing student protests on the previous regime, while insisting that the Government was committed to resolving the issue amicably without compromising on free education and the quality of the profession.

“We’re committed to protecting free education. Establishing PMCs doesn’t mean that state medical students are no longer a priority. We’re taking steps to further improve state medical education by opening new faculties. Land has been allocated in Ratnapura, for example, to convert the hospital there to a teaching hospital. Plans are also underway to increase student intake in state facilities,” he said.

There’s a shortage of 6,000 doctors in this country, said Hashim, adding that there aren’t enough medical graduates to compensate for this.

“Rs. 2 billion is spent annually just for our students to go abroad and get the medical degree. The SLMC accepts 232 foreign universities. That money can be saved at a place like SAITM, as long as it’s up to standard,” he said.

The Government is, according to the Minister, confident the matter can finally be put to rest.

“We have to resolve this without hurting the SAITM graduates, without hurting free education, without compromising on the standards of the SLMC. Both the President and the Prime Minister are committed to this. We believe this can be solved in a pragmatic manner,” he said.

GMOA President Dr. Anuruddha Padeniya told Roar last evening that since his association had yet to formally receive the Government’s latest proposal in writing, the GMOA was not in a position to comment on the matter.

“We’ve yet to receive anything in writing. Today, we had a meeting and we made a decision to make a comment once we receive it,” he said.

However, upon further questioning, Dr. Padeniya expressed his skepticism of the Government’s sincerity in its attempt to resolve the matter once and for all.

“Well, none of [the three options proposed] were our demands. What we demanded was, if there is any place where a medical education is taking place, that has to be under the purview of the Sri Lanka Medical Council (SLMC). That is our demand. None of these statements are fulfilling that obligation,” he told Roar.

Asked if the GMOA will not settle for anything less than a total government takeover of SAITM, Dr. Padeniya said: “Our demand is that any medical education has to be under the purview of the medical council. You can’t call this a medical institution. To call it a medical institution, you have to bring it under the SLMC. That has yet to happen. All of these are misleading statements [contrary] to the primary point we’re raising. That is the prime obligation. The operating mechanism is a different issue.”

Dr  Padeniya strongly believes the GMOA’s fight is for the benefit of the public. Image courtesy Daily News

Though the GMOA’s strike and the IUSF’s protests appear to have drawn the public ire—at least going by social media responses—due to lack of any real data, it is difficult to ascertain where the average citizen stands on the issue or, indeed, whether or not he or she even considers it important.

Lecturer at the University of Moratuwa (currently reading for his PhD), Nisansa de Silva, considers it a matter of utmost importance.

“I’d say I care about it a lot. Because this is the “beachhead” in the battle for PMCs in SL. The last time it lost when Ragama was stolen. It took decades and a dictator to get a PMC back. If this beachhead is lost, establishing PMCs in SL will again be a distant dream,” he said.

Others who spoke to this writer expressed similar sentiments, with impassioned denunciations of the doctors on strike and the rioting students causing what they said was great inconvenience to the public.

Second Year student of the Faculty of Arts. Hiranyada Devasiri, however, sees a purpose in all the mayhem.

“Obstruction to daily life is a characteristic of trade union actions and demonstrations and whether such activities are unethical remains a question. The legitimacy of the struggle to abolish SAITM is often seen to be based on the sanctity of the IUSF or GMOA standpoints and practices. However, the issue of privatisation of education has an existence of its own that is unaffected by what the GMOA or the IUSF does (or doesn’t do),” she told Roar.

Dr. Padeniya is of the opinion that any inconvenience suffered by the public is a small price to pay given what’s at stake.

According to Dr. Padeniya, what the GMOA has been fighting for all along, is for SAITM to come under the purview of the SLMC. He accuses those critical of the GMOA’s trade union actions of missing the bigger picture.

“If the doctor is unregistered, if the patient is unhappy about his doctor, he will have no one to complain to. Do you want that kind of anarchy situation, where doctors can do anything?”

“It is a universal norm that no medical faculty can exist—whether private or public—without medical council approval. Here, it’s an unacceptable situation where [SAITM] is functioning without SLMC approval. SAITM first sought BOI approval for a management institute, not a medical institute. Get the SLMC approval first. The operating methodology can be discussed later,’ Dr. Padeniya told Roar.

Even though it is doctors who are at the forefront of the cause, he said, it’s very much a public issue.

“The SLMC is not a doctor’s council, it is a patients’ council that has the ability to visit doctors, inquire [about] doctors and to find fault with them. In a civilised country that’s a bare minimum. These people are trying to change that,” he said.

“This is exactly what has happened in politics—when politicians play hell, we have no one to complain to. That doesn’t exist in the medical profession. If you’re unhappy with the treatment, you have the right to go to the SLMC and either get compensation, or get corrective measures or even remove the doctor’s registration. All this power is in the hands of the patient simply because of the SLMC,” he added.

Supposing SAITM does obtain SLMC approval, would the GMOA still stubbornly cling on to its “abolish or nationalise” mantra?

According to Dr. Padeniya, this is purely semantics.

“Nationalisation is not a single term. You can have various kinds of models. First of all, the SLMC should be satisfied with the operating mechanism. The country doesn’t have to do what we say, but it should stand by the universal norm. That’s all we’re saying,” he stressed.

Dr. Padeniya is of the camp that subscribes to the view that medical education cannot be run in a completely profit-oriented model. “It has to be a mixture,” he said.

Ultimately, the GMOA’s end goal is to ensure that SAITM falls in line with this (according to him) universal precedence.

“All this is done to safeguard the interests of the patient. [The doctors on strike] are not extremists. There are norms in the medical faculty; they’re not unique to the SLMC. They’re universal. Let them fall in line. Right now, they’re blocking the primary issue from being resolved,” he said.

The GMOA is scheduled to meet this week to discuss their future course of action. Their decision, and the Government’s response to that decision, may decide the fate of the students caught in the crossfire.