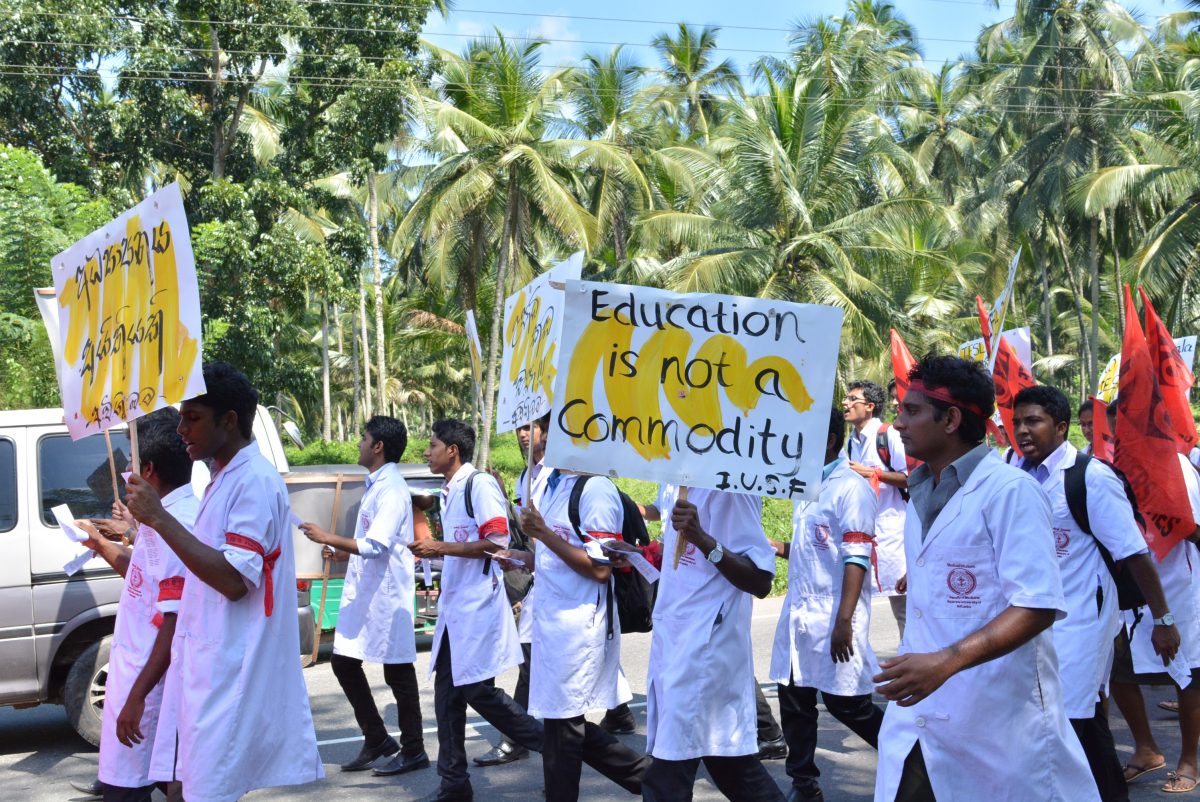 If the abbreviations SAITM, SLMC, GMOA, and IUSF are alien to you, and you’re confused as to why students are being tear-gassed and water cannoned by cops, then you’re in the right place.

News of protests by the Inter University Students Federation (IUSF) and strikes by the Government Medical Officers Associations (GMOA) have flooded Sri Lankan screens and papers once again. A critical court ruling has seemingly turned the tide of a bitter debate about the legitimacy of medical degrees offered by the South Asian Institute of Technology and Medicine (SAITM).

For many, the controversy surrounding SAITM largely boils down to the perception that Sri Lanka has long suffered from an acute shortage of both medical professionals and public university seats. With only a fraction of eligible students gaining entry into state universities, many argue that private colleges are the way forward.

However, there are also those who, in the interest of preserving free healthcare and education, argue that it is the state’s responsibility to increase capacity at public universities, and that services such as education and healthcare should not be left up to the whims of the market.

While Roar has reported on the SAITM issue a number of times before, recent developments have warranted a refresher on the topic as both public debate and unrest have renewed.

The SAITM saga all starts with one man: Dr. Neville Fernando. Previously a medical practitioner based in Panadura, Dr. Fernando entered into politics around the 1970s and has at various times been affiliated with both the UNP and SLFP. Today, Dr. Fernando is better known as a businessman and Chairman of Dr. Neville Fernando Investment Co Pvt Ltd ‒ the private entity which founded SAITM.

SAITM ‒ which then stood for South Asian Institute for Technology and Management ‒ was founded in 2008 with the blessing of the Board of Investment. The university initially offered degrees in a number of fields including IT, finance, management, engineering, languages, and health sciences. At the time, SAITM’s medical degree was touted as being jointly conferred with the Nizhny Novgrod State Academy of Medicine in Russia.

The conditions of SAITM’s agreement with the BOI also stated that the private college would first have to gain approval from the Ministry of Health and the Sri Lanka Medical Council (SLMC) before providing any sort of education in the field of health sciences. SLMC President Dr. H. H. R. Samarasinghe was quick to inform SAITM that there was no legal provision to recognise degrees jointly awarded by a private college and a foreign university.

In the backdrop of these irregularities, SAITM began its first intake of medical students in September 2009, despite not gaining the blessing of the Ministry of Health or SLMC. The university continued to take in students in and, after a number of reviews and recommendations by the University Grants Commission, a 2011 gazette notification declared SAITM a degree-awarding institute, invested with the authority to grant medical degrees, too.

Meanwhile, the SLMC continued to make its opposition to SAITM clear, advertising through several publications that it had no provision to monitor or recognise SAITM’s medical degree. As public debate heated up, students from the IUSF and doctors from the GMOA eventually added fuel to the fire, launching a series of protests and strikes that have continued to this day.

Adding to SAITM’s woes was its inability to provide its students with the prerequisite internship placement before completing their degrees and registering with the SLMC. In April 2011, a Memorandum of Understanding was signed with the Western Province to allow SAITM students access to government hospitals in the region. However, threats of strike actions by the GMOA prevented this from materialising.

With the first batch of medical students nearing graduation and SAITM still unable to provide adequate internship placements at government hospitals, Neville Fernando Investments took matters into its own hands and, with a loan of Rs. 2 billion from the state-owned Bank of Ceylon, began conversion of the SAITM engineering faculty in Malabe into what became the Dr. Neville Fernando Teaching Hospital (NFTH) in 2013.

Despite the gazette notice and access to its own teaching hospital, SAITM ‒ being a non-state institute ‒ still required a certificate of compliance with standards from the SLMC. SAITM applied for this certification on August 2014, and after a drawn out back and forth, a ten-member inspection team from SLMC visited both SAITM and NFTH for evaluation on July 2015.

The final report, released in August 2015, concluded that the SLMC should not recognise graduates of the SAITM Faculty of Medicine as eligible for provisional registration. The report cited a plethora of concerns including inadequate facilities and a poor student to patient ratio at NFTH.

Anti-SAITM protesters outside the Court of Appeal. Image courtesy: omlanka.net

The issue continued to simmer over a year until disgruntled students from SAITM Medical Faculty’s first batch of graduates took the matter to the Court of Appeal in July 2016. Petitioner Dhilmi Kasunda Malshini Suriyarachchi sought to ensure that she could be provisionally registered at the SLMC and allowed to continue training, and practise medicine.

In a blow to the IUSF and GMOA’s campaign, the Court of Appeal on Thursday ruled in favour of Suriyarachchi. The ruling effectively compels the SLMC to recognise Suriyarachchi’s degree as valid and to provisionally register her. However, the ruling applies to Suriyarachchi alone and does not force the SLMC to register other SAITM graduates.

Police have used teargas and water cannons to disperse anti-SAITM protesters in the past too. Image courtesy: lanka-universitynews.com

Immediately following the court ruling, the IUSF launched a snap protest in Colombo. Protests continued on a massive scale into Thursday, as police fired teargas and water cannons to disperse crowds. In addition, about 21 students were arrested, though they were released shortly.

Meanwhile, an emergency meeting held by the GMOA lead to a token strike on Friday from 8:00 a.m. to 12:00 p.m. The union has hinted that it would continue to resort to strike action until the matter has been settled.

Politicians, too, have thrown weight behind the development, with the Janatha Vimukthi Peramuna (JVP) in particular, taking a vocal stance. JVP Parliamentarian Bimal Ratnayake slammed the Sirisena administration, charging that it was responsible for the court verdict granting SAITM legitimacy. Elsewhere, JVP Parliamentarian Dr. Nalinda Jayatissa has said that his party would appeal the judgment at the Supreme Court.

On Monday (February 6) it was reported that SAITM CEO, Dr. Sameera Senarathne, had been shot at by two men on a motorbike when he was leaving SAITM’s Malabe campus that evening. Dr. Senarathne escaped unhurt, but later told media that he had been receiving death threats for three days beginning February 1, and had filed Police complaints regarding the matter.

Stay tuned to Roar for more updates on this developing story.