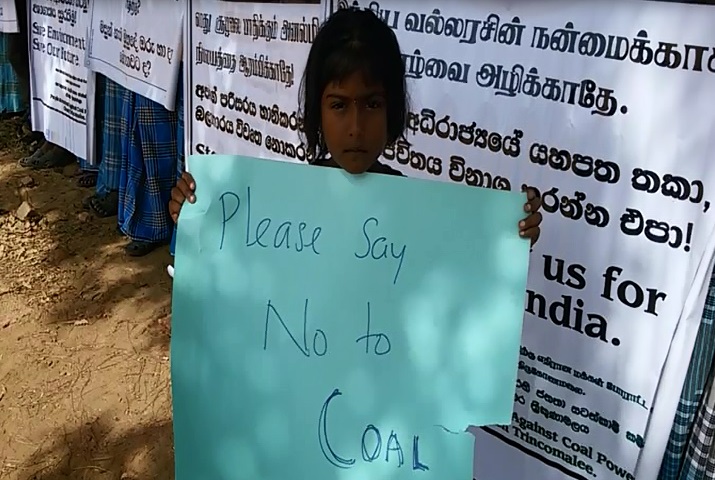 The Attorney General’s Department on Tuesday (13) informed Supreme Court that the controversial Sampur Coal Power Plant, which was to be a joint venture with India, will not be constructed.

The proposed power plant drew much criticism from environmentalists and residents of Sampur, who have voiced concerns about environmental pollution and threats to livelihoods.

Thus, on May 30, 2016, the Environmental Foundation Limited (EFL), along with other experts and organisations, filed a Fundamental Rights (FR) Application, against this proposed coal power plant in Sampur, Trincomalee.

The FR application was taken up by the Supreme Court yesterday (13).

The Sampur Power Plant: Some Background

The Power and Energy Ministry will not be going ahead with the proposed coal power plant in Sampur, a project which drew much opposition. Image courtesy omlanka.net/S.Kathiravan

Back in 2005 an Indian electricity generation company ‒ the National Thermal Power Corporation ‒ announced that they planned to submit a proposal to the Sri Lankan Government to set up a 900 MW Coal/Liquefied Natural Gas (LNG) based Power Project.

In 2006, the company announced that the proposed project had been reduced to a 500 MW station and that the fuel would be coal based.

A Memorandum of Understanding was signed for the first 500 MW phase in December 2006, between the Government of Sri Lanka, the Ceylon Electricity Board, and the National Thermal Power Corporation, India.

However, after several discrepancies over the feasibility report and the revelation of a potential financial loss of over USD 135 million to the Sri Lankan Government, the construction was halted, until February 2016, when the project received the environmental approval.

It was brought to a halt once more, however, in May 2016, when the EFL filed the FR Petition.

Roar explored the various consequences of this proposed power plant in a previous article; these included a potential threat to those who live in and around the proposed area.

Speaking to Roar, attorney-at-law Gayani Hewawasan, Head of EFL’s Legal Division, said “Our main grievance was that there were discrepancies in the environmental impact of the supposed Coal Power Plant in Sampur, Trincomalee. The grievances included that there were long-term environmental and health impacts that any coal power plant would invariably cause, and we used the Norochcholai Power Plant as an example. The villages surrounding that power plant have been severely affected by environmental pollution, the depositing of coal, dust and ash everywhere, and such. There are many health impacts as well, when using coal as an energy source.”

It was based on these grievances that the EFL filed their FR case on May 30, and yesterday, the matter was brought before Chief Justice K. Sripavan and Justice Prasanna Jayawardene at the Supreme Court. “We have named eight government institutions as respondents including the Ceylon Electricity Board, Central Environmental Authority, and the Ministry of Power and Energy,” explained Hewawasan.

Accordingly, Deputy Solicitor General, Sanjaya Rajaratnam, who was appearing on behalf of the respondents, informed Court that he had received direct instructions from Dr. Suren Batagoda, Secretary to the Ministry of Power and Renewable Energy, that the Ministry will not proceed with the Coal Power Plant in Sampur.

“Dr. Batagoda was not named as a respondent in the petition, although Mr. Rajaratnam said the instructions were given by the Secretary to the Ministry of Power and Renewable Energy,” Hewawasan said.

“The undertaking that was given was recorded at court. Therefore the Chief Justice intimated that, since our main grievance was removed, there won’t be a requirement for us to proceed with the matter. President’s Counsel K. Kanag-Isvaran, representing EFL and the petitioners, agreed to the conditions that, based on the undertaking by the Ministry, EFL agreed to the termination of the proceedings.”

It’s Not Exactly Over Yet

Hewawasan emphasised that the case has been terminated and not withdrawn. EFL and the petitioners retain the right to go back to courts should the Ministry violate the terms of the undertaking.

Furthermore, she said, “We do not know why the Ministry finally agreed to this. But we did highlight the issues because this was a very controversial matter. We have analysed at length the environmental impact assessment report that was used to get the permission. Although EFL was the petitioner, I must mention here that we were backed by a rather large number of experts, all of whom had, at various points, shown the Government that we could go into 100% renewable energy as opposed to coal. We have alternatives.”

She added that, “Now we have a very concrete policy decision recorded in the highest court of the country and an undertaking by the Government. So I think at the moment that is a good enough stand.”

When Roar contacted Sulakshana Jayawardena, Development Director for the Ministry of Power and Energy, he said that the Government has, following the decision to terminate the Sampur Power Plant project, decided to convert the area into a tourist hotspot instead.

“Although the Ministry originally planned to construct a 500 MW coal power plant in Sampur there was a later development where the government declared Sampur and the surrounding area as a potential tourist location, therefore creating a potential to transform it into a hotspot. Having considered all health and social issues regarding the matter, the Ministry decided to terminate the [coal power] project,” he said. How the government plans on turning Sampur into a tourist hotspot is as yet unclear, bringing to question whether this, too, could potentially affect Sampur’s pristine environment.

Of all the fossil power sources in the world, coal has proven to be the most irreversible polluter through its emission of mercury. After the Norochcholai Power Plant caused a large number of people living in surrounding villages to fall sick, the idea of another power plant in an area like Sampur, which already witnessed much distress during the war, raised much concern. Thus, it is safe to say that the Ministry’s decision to put a stop to the Sampur Power Plant is an intelligent ‒ and much welcomed ‒ one. How India responds to this, however, is yet to be seen.