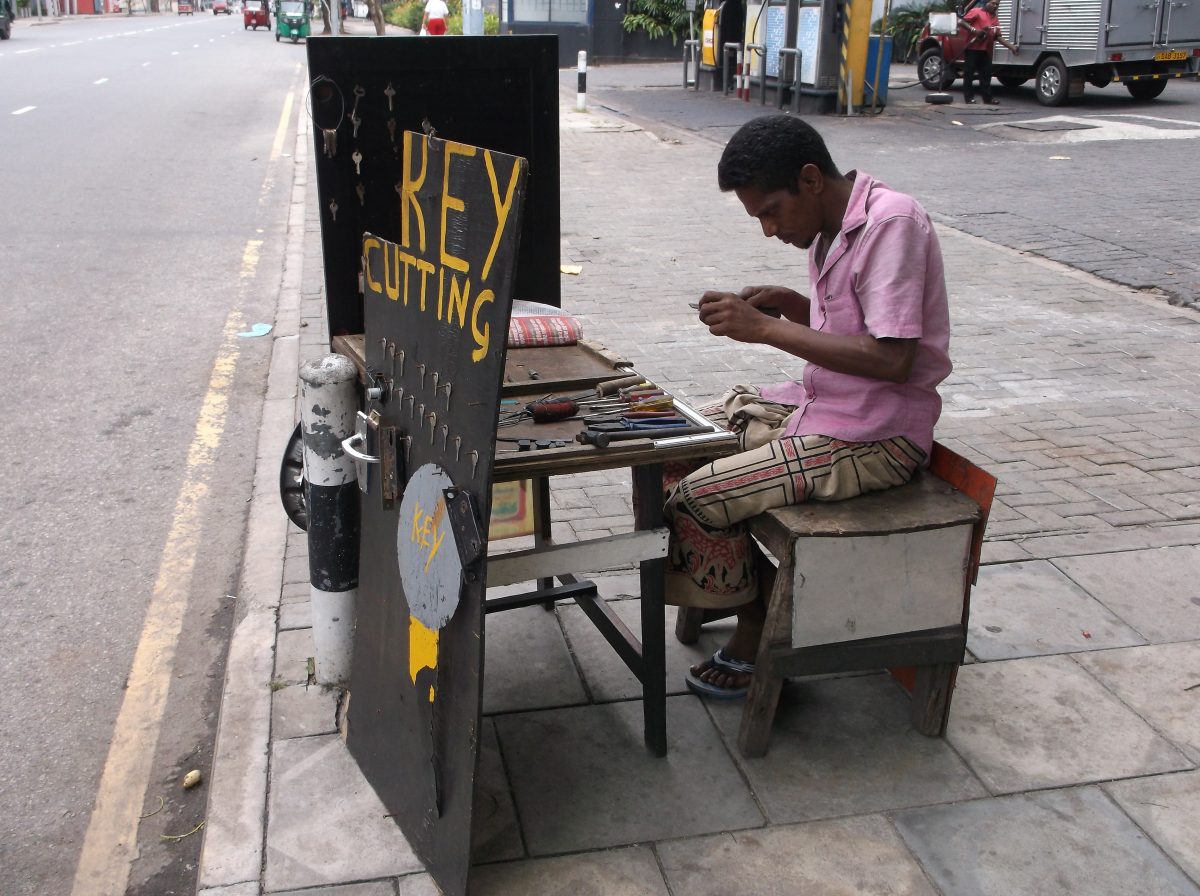 A few decades ago, the pavements of Union Place (now Colvin R de Silva Mawatha) were lined with artisans and traders. The most aristocratic among them were the locksmiths, calling themselves “key cutters”.

Today, only a few continue to ply their trade. One of the oldest is Imtiyaz, who works from his cart, parked on the pavement, next to the bus halt in front of a venerable Slave Island institution, the Ceylon Boot Manufactory.

Imtiyaz has been a locksmith for 40 years. His father died when he was six, and he was brought up by his paternal uncle. He had six brothers, none of whom are locksmiths. He studied up to Grade 8 at Al Iqbal College, Slave Island, which in those days was a co-educational institution – today it is a girls’ school. He learned his trade while apprenticed to a locksmith named “Moses Aiyah”, who worked near the Kompañña Veediya post office.

“As a child, I used to sell sweep tickets,” he says, “the ‘50 Cent Fortune’. Where I worked there was a master locksmith, who had five or six apprentices. I watched him work and learnt the trade from him. After that, when I was 16, I came and started working here, and I have been here all along. I was sixteen when I started. I am now 57 years old.”

None of Imtiyaz’s three sons has followed in their father’s footsteps. In most families, however, the calling is hereditary. Arshad, who has his cart under a banyan tree next to the petrol shed opposite Colonial Motors, learnt the art from his father, who had learnt it from his father. His relatives are all locksmiths.

Arshad complains that, because he is on the central part of Union Place, he gets fewer customers. His brother, who works closer to Ibbanwela Junction, is more strategically placed. Even so, the number of customers is not as high as it used to be.

Arshad at his ‘key-cutting’ station.

Imtiyaz concurs that there are fewer customers, which is why there are not so many locksmiths down Union Place. Right up to four or five years ago, he says, customers would come to Slave Island to get a locksmith.

“In the old days, we would go out on jobs to Wellawatte, Dehiwela, and Mt. Lavinia. I have gone out on jobs to the Queen’s Hotel in Kandy, to Munneswaram, to the Kitulgala Rest House. There have been times when I went outstations at 2:00 a.m. to open vehicles from which the owners had got locked out, and they brought me back by dawn. This used to happen even four or five years ago. Now we have mainly to cut the keys they bring us. Although we occasionally get jobs when people’s doors get locked in Nugegoda, Battaramulla, Maharagama, there are now locksmiths in those areas, and these jobs have become rare,” he says.

Their business is being taken over by chains of locksmith shops which have come up all over the city, especially in the key localities of in Colpetty, Bambalapitiya, and Wellawatte.

“They employ a lot of low-paid, casual staff,” he explains, “who do not work permanently in one place, but move from job to job.”

Although Imtiyaz does not mention it, most of the competition comes, not from shop chains, but from mobile locksmiths who use mobile phones and the internet to get business. Even Imtiyaz uses a mobile phone, and he has given his number to local businesses and offices, such as CIC, Sri Lanka Telecom, and Nawaloka Hospital. Arshad, although young enough to be Imtiyaz’s son, confesses he does not own a mobile phone, which puts him at a disadvantage and places him, technologically, in an earlier generation.

“When they phone me,” says Imtiyaz, “I ask them to come here, for them to pick me up. I don’t go there, because I cannot be sure if  they might be doing something dishonest.  I have a very good relationship with the police, because I have not done anything wrong. The police love me, because I don’t get involved in brawls and I don’t make secret keys; I have never gone to jail. I do work for the police as well.”

Obviously, the aspect of trust is very important. The customer has to be absolutely sure that the locksmith can be trusted. It is for this reason that most stick to a single locksmith, which of course favours older locksmiths such as Imtiyaz.

On the other hand, another reason for not travelling to the customer is that it prevents losing out on false alarms. It is a risk run all the time by the new generation of locksmiths who operate using ICT (information and communication technology).

The new, tech-savvy cohort is represented by Zaheer, who is a third-generation locksmith, having learnt the trade from his father. Five of his six brothers are also locksmiths – the sixth is a fisherman. Zaheer does not operate out of Slave Island, although his roots are there, he was born and brought up there, and was schooled there. For many years, he lived and worked as a locksmith in Battaramulla, before going mobile.

Although Zaheer now lives in Thotalanga, Colombo 14, most of his clientele are around his old base. They contact him on his mobile phone. Seven or eight of them will ring him on a good day, although never on some days, he says. The urgency of the work means he has to multitask – talking to clients on his mobile phone while adjusting a lock or cutting a key.

He carries his stock-in-trade with him in a large backpack. The items are limited to what he can carry on his ageing motorbike. Spread out on the floor of a customer’s house are his tools – a bewildering variety of files, screwdrivers, spanners, Allen keys, hooks, picks, and thingamabob implements in general – and a large hoard of keys wrapped in a car cleaning cloth.

He finds new customers by through shopkeepers, who contact him when there is a query by a customer, and get him down to the shop, but don’t give them his mobile number. The shopkeeper gets half of Zaheer’s fee as commission.

“They even take half of whatever I charge for the travelling,” he complains, “so I have to charge double what it costs me.”

Zaheer gets most of his new clients through a shoe repair shop in Welikada. The locksmith trade is also associated with cobbling. Both Imtiyaz and Arshad work side-by-side with pavement cobblers. This association of the two occupations is not a phenomenon which is limited to Sri Lanka. Why this relationship exists is a mystery, which merits research. John Timpson, CEO of the Timpson shoe repair chain in the UK, suggests that this came about because the rapid decline in the cost of mass-produced synthetic shoes reduced the market for shoe repair.

Mass-production has done more than cause skill-consolidation; it has also changed the structure of the customer base. Widespread adoption of MDF-board almirahs and cupboards, known generically in the local market as “damro”, and of pre-made plastic or plywood bathroom doors, has meant that padlocks and mortice locks have lost ground to cylinder-type locks.

Jimmying a complicated cylinder lock open is a matter of a few minutes’ skill, but it is for this that the locksmith charges their fees. One is reminded of the old saw about the plumber who charged £ 101 for tapping a sink drainpipe, to clear a blockage: £ 1 for tapping, and £ 100 for knowing where to tap it.

On the other hand, cutting a new key for a modern lock can be quite a complicated operation. The advantage of the cylinder lock is that the lock can be modified to an existent key. The amount of time spent filing the key down to fit is reduced dramatically, always a consideration if you are expecting to travel to meet several customers in a limited time.

New technology affects locksmiths in other ways, too. For example, most car keys nowadays are electronic.

“New technology locks, such as the remote-control keys of modern vehicles,” explains Imtiyaz, “don’t respond to the keys cut by us, which can open the doors, but cannot start the vehicle. They can open the doors, but cannot stop the car alarm: in order to do that, it is necessary to adjust the alarm system. The keys that I cut have to be given to the company, and they will program the chip.”

On the other hand, Arshad says that he can get hold of a new-technology freelancer who can program the key, or even re-adjust the car alarm system remotely.

“They have an app on their phones”, he says, “with which they can do this off the internet.”

There is another reason for the thinning in numbers of locksmiths on Union Place – the lure of overseas employment.

“My wife’s two younger brothers and my sister’s son,” says Imtiyaz, “ also follow this trade, but in Doha, Qatar.”

Being a locksmith can be lucrative in a place like Qatar – whence employment for the profession comes in a steady stream. Zaheer has siblings working in Doha who are doing better than himself; he has 11 dependents, including his in-laws, for whom he is the sole breadwinner. The immobile and communications-deficient Arshad finds it difficult to make ends meet, and he has only a wife and child who depend on him. He, too has relatives in Qatar.

All things considered, it seems that it will be only a matter of time before Slave Island loses its last remaining pavement key-cutters.