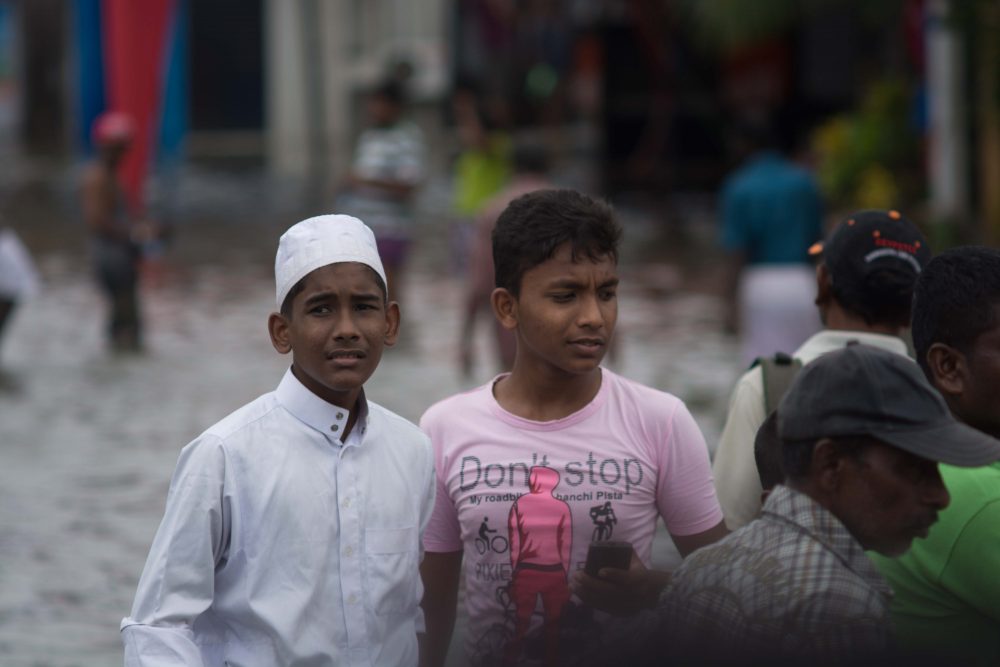 A Sombre Ramadan For The Flood-Affected

Sithy Nehara looked dejected as she walked the distance from the road to the semi-built structure that is her home in Kolonnawa. It was 3:30 p.m. She needed some essentials to prepare for iftar, the meal at which Muslims break their fast. Nehara is one of many who had their houses entirely submerged in water during the floods that wreaked havoc in Kolonnawa and other parts of Colombo last month.

Many Muslims in the area struggle to keep their fast during the holy month of Ramadan as they have not yet recovered from the colossal losses they suffered. Nehara’s home was situated on the unprotected side of the Salamulla bund, which was entirely inundated in water.

“Only my roof was visible, everything else was submerged. We lost our clothes. Beds were broken, and the cupboard doors were hanging from the hinges. Fasting during this month is very difficult. As it is, Ramadan and Eid are a very costly period for us. We would eat rice and curry for sahar (the pre-dawn meal) and prepare kanji and short eats for iftar. But now we have got nothing,” Nehara said.

She went on to add that “only last week I bought bottles to store sugar and milk powder. I got rice and dhal from the Kolonnawa Jummah Masjid when Ramadan commenced. I have been preserving it for nearly two weeks now, using it very sparingly. We need rice for kanji. I try to increase the quantity of the kanji with more water. My son loves having sherbet for iftar. We cannot make any of that because we haven’t got the utensils,” she said, gesturing towards the sparsely equipped kitchen.

Nehara’s two-room home does not have separate bedrooms. When we visited, Nehara’s sister-in-law lay on a mattress on the kitchen floor. Nehara’s husband had passed away several years ago. She lives with her fifteen-year-old son, and sister-in-law.

“This is where we sleep,” she said, adding, “we tried to save our mattresses. But they had been soaking for nearly ten days. Although the surface had dried, they were still damp.”

A wealthy businessman who had heard of their predicament had provided them with a mattress for Nehara’s ailing sister-in-law to sleep on. Every day of Ramadan is a struggle for Nehara and her family. Every evening when the family partakes in their iftar meal, Nehara said that she has to urge them to be frugal.

“It breaks my heart to do so. But I have to make sure that there is food for the following day. Unfortunately, my son is a growing child and my sister-in-law is a patient. They both need their nourishment,” said Nehara, her voice betraying her unshed tears.

She added that her next challenge would be purchasing new clothes for her son. She and her sister-in-law would make do with what they have.

A short distance away from where Nehara lives, Noorul Aasiya suffers a similar predicament. She, too, struggled to feed her four young children, all between the ages of three and fourteen. She lives in Ekasiyaekewatte, in Meethotamulla, in close proximity to the Meethotamulla garbage dump.

“The water was up to my husband’s chest and he is 6 feet tall. He carried our three-year-old son on his neck and hoisted our seven-year-old daughter on his shoulder. We worried that he would slip. My husband and my children had the viral flu for two weeks after the floods. The fever was fluctuating. All of them missed the first week of Ramadan,” said Aasiya, while placing a massive carpet, tattered and yellow with age, on top of a concrete fence. Her husband had bought the carpet when he was working in Saudi Arabia. Aasiya felt very nostalgic about that carpet.

“I had that carpet for fifteen years. The first time I moved into this house I was pregnant with my son. My husband bought the carpet from abroad for our bedroom as we didn’t have the finances to polish the floor. For the last ten days, I have been soaking this carpet in disinfectant. I should actually get rid of it. But my heart won’t let me,” she said.

Picking Up The Pieces

Kitchen utensils and other belongings that had to be thrown away. Image courtesy writer.

Unlike in other areas that had been flooded, the residents of Ekasiyaekewatte who live in close proximity to the garbage dump were instructed by the authorities in the area to discard any items which had been saturated by flood water. This was because the rain had washed away garbage from the Everest-esque dump into people’s homes.

“Ideally, I should throw away all of my bed sheets and mattresses. But we can’t afford new ones. Ramadan has been especially tough for me. I have been taking care of my sick husband and children while sterlising our bedding, clothes, and utensils. Our washing machine was destroyed in the floods. My mother and I have been squatting for hours scrubbing and cleaning,” Aasiya said, stretching out her hands, which were full of blisters. She explained that the blisters were due to scrubbing bedding and clothes which were soaked in boiling water and disinfectant.

“I am ashamed to say that I have spent most of this spiritual month away from the Quran. I hardly get time to engage in spiritual activities. Our copies of the Quran were soaked. My husband and children spent hours mopping water from it, turning each page, drying it in the sun. From the time my mother and I have our sahar meal up until iftar, we work. What is the point anyway? We haven’t got utensils or the finances. My son wants to me to make string hoppers for iftar. How can I? The mould we had was washed away by the water,” she said.

Qasim, who joined the conversation, noted that Ramadan was a sombre affair for all of them. He lived in Megoda Kolonnawa, which was one of the worst hit areas. He added that families with young children suffer more as the promise of the scrumptious meal during iftar motivates little children to keep their fast. Every iftar, his children crave for kanji, considered a Ramadan essential, which this month is a luxury for most.

He went on to say, “We got rice from the Masjid and some other volunteer organisations. My wife uses it sparingly. An hour before iftar she cooks rice and curry, which we have for iftar and save the leftovers for sahar the following day. She is preserving the bulk of it for Eid.”

He further noted that he will not be able to share the traditional Eid sweets with his neighbours and friends this Eid. Expressing his regret, he said, “My children also look forward to a special Eid meal. Sadly, I will have to disappoint them as well.

Ramadan With No Kanji, Eid With No Watalappam

Kanji, usually a Ramadan staple for Sri Lankan Muslims, is a luxury for those strugglning in the aftermath of the floods. theasiangrandmotherscookbook.com

For the many Muslims in Kolonnawa and Wellampitiya we spoke to, maintaining the custom of exchanging traditional food with their friends, relatives, and neighbours is a deep-seated concern as they do not have the financial resources, the basic ingredients, or even the utensils to keep up to this custom.

Ahamed Jameel from Wellampitiya felt very deeply about not being able to engage in the customary act of exchanging traditional Eid food with his neighbours. He walked into his humble kitchen, which was bare except for three plates and a stove. As a father of three children, he has to wait till his children finish their meal before he and his wife partake in their meal due to the lack of plates.

“How can we offer traditional food to our neighbours on such shoddy utensils? But that is all we have got. A neighbour had told my daughter that she is looking forward to having watalappam prepared by my wife. My daughter came home and cried. She knew there won’t be watalappam this year. She will be lucky if she gets the new shawl for Eid which she has been angling for. Every extra cent we had, we spent towards buying a fridge. We have not got anything left after that,” he said.

The residents in the area were full of praise for the Kolonnawa masjid which functioned as an IDP shelter during the immediate aftermath of the floods. According to residents, the masjid had made a list of those who were affected and had distributed their Zakah donations to them.

The Meethotamulla garbage dump – flood water was not the only thing wrecking havoc on homes in this area. Image courtesy writer.

Kolonnawa Jumma masjid Secretary, Al Haj Ferose, noted that most people are at a loss as to how they should continue their lives, as they have basically moved into empty houses, after disposing of their belongings which were destroyed by the floods.

Speaking to Roar, he added that eighty to ninety per cent of the families have moved back to their homes, despite the houses being empty, while another twenty per cent whose homes were completely destroyed are still languishing in IDP camps.

“Fifty to sixty families are still staying in tents in Umagiliya grounds, Kolonnawa. The Muslims in those tents were sent to Hamza Vidyalaya in Mattakuliya so that facilitating them during Ramadan would be practically easier. We have appointed someone there to mind them till the end of Ramadan. There were some businessmen who volunteered their personal funds to make Ramadan easier for those afflicted. Through the mosque we are doing whatever that’s possible to make matters easier for the people. Every day we hold discussions in order to ascertain the best way to serve the people,” he added, and noted that 29 mosques fall within the purview of the Kolonnawa mosque federation.

He also added that the Kolonnawa Jumma Masjid has given each masjid in Kolonnawa-Wellampitiya region the responsibility of seeing to the needs of those afflicted and assisting them to observe the month of Ramadan.

“We have told the heads of these mosques to take care of the flood afflicted Muslims who observe the fast. They provide short eats and dates. The other masjids in Colombo like the Dehiwala masjid and the Wellawatte masjid also financially assist the masjids that devote their time to make Ramadan easier for the afflicted. For all masjids that come under our federation we pay each masjid Rs.15,000 per day for 38 days to cover  Ramadan expenses,” he explained.

Nehara, who also conceded to the fact that the mosque was doing its utmost to facilitate Muslims in Kolonnawa, added, “It is God’s plan to test our patience and trust in Him this way. Last Ramadan we had everything,and this Ramadan we are left with nothing. Yet we continue to fast.”

Nizamdeen, who works for the mosque treasury, also observed, “It is God’s plan to test the wealthy and the capable during the holy month in order to ascertain whether we supplement this fast we observe with compulsory charity. Helping the afflicted is an act of worship which God would reward us for, especially during the month of Ramadan.”

He looked on as children streamed out of the masjid, heading home to break their fast, gaily talking about shopping expeditions and new clothes for Eid. Nehara’s son walks forlornly behind them. For him and many other flood-affected Muslims, Eid this year would be a sombre affair.