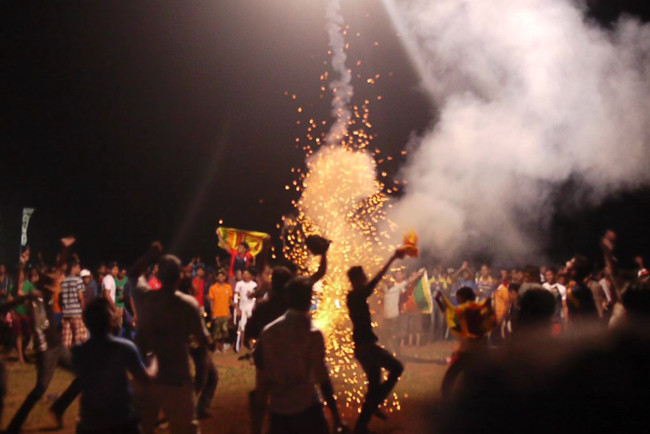 With 2016 just around the corner, and all of us scrambling to fulfil last year’s resolutions before the fireworks erupt over Galle Face – it wouldn’t hurt to look back on 2015 and review the year’s more important events. In case you too, in typical Sri Lankan fashion, seem to have suffered a bout of memory loss (One whole year has already gone by?! What even happened, machang?) here’s a breakdown to help refresh your memories. [For those of you who’d prefer a comprehensive timeline of events instead, just scroll down.]

The year opened with what could arguably be one of the most memorable events in local politics, with the much talked about January 8 elections. Former President Mahinda Rajapaksa, who called for early elections, was ousted by Common Candidate Maithripala Sirisena. The unexpected victory put an end to Rajapaksa’s nearly 10 years in office.

This year was also rather eventful in terms of criminal investigations, particularly into issues that had, for political reasons, previously been shoved aside. One such issue was the investigation into the death of ruggerite Wasim Thajudeen, whose body was exhumed during the re-opening of his case, shortly prior to parliamentary elections. Over three years since Thajudeen died, Court finally ruled his death a homicide earlier this month.

The other case that was much talked about was the Avant Garde conspiracy, investigations into which saw several former high ranking Sri Lankan officials called before the PRECIFAC.

On a sadder note, in September a four and a half year old girl, Seya Sadewmi, was reported missing, and her body was found two days later. Investigations revealed that the child had been raped and murdered. The search for her killer ended in October after Samantha Jayalath, brother of the notorious ‘Kondaya’, confessed to the rape and murder of the child.

This wasn’t the first case of rape to send waves of horror across the nation this year. Earlier, in May, eighteen year old Vithya Sivaloganathan was found brutally raped and murdered in Pungudutheevu, Jaffna. Over nine suspects, including a Swiss national, were arrested in police investigations. The crime also incited protests in several parts of the island.

The budget of the new Government was presented by the Finance Minister in Parliament last month. Although it was first met with some surprise, this soon turned into apprehension, with many claiming it sounded too good to be true, and others pointing out problematic loopholes. While prices of many essential items were brought down, the actual effects of other budgetary allocations, amendments and promises remain to be seen.

The economy ends the year on a disappointing note however, with the Sri Lankan rupee hitting a record low on Tuesday, December 29.

Among the many ways Sri Lanka made a foray into the international news scene this year, by far the geekiest was thanks to the space debris that headed Lanka-wards on November 13. Adding to that, the ‘event’ was scheduled for Friday the 13th, so quite a few conspiracy lovers were caught up in anticipation. Although the actual results were rather anti-climatic, the whole episode was, for some at least, fun while it lasted.

It was a sad year for cricket fans, with Sri Lanka losing the first quarter final of the World Cup to South Africa in March, and Kumar Sangakkara (undoubtedly one of the country’s most favourites) announcing his retirement from test cricket.

With the year coming to a close, we also saw one of Sri Lanka’s biggest live concerts to date. Enrique’s Sex and Love tour, however, ran into a few roadblocks  – the least of which, it would appear, were the delays and calls for refunds. Post-concert comments by President Sirisena resulted in Sri Lanka entering international limelight for entirely wrong reasons.. What with the President’s conservative reaction to the now infamous “bra throwing” incident, and his statement about “whipping” the concert organisers, the internet had a field day (or six).

April 25 – A man, alleged to be an intelligence officer, is arrested at an event in Angunakolapelessa held under the auspices of President Maithripala Sirisena. The arrested man had possessed a firearm at the moment of arrest.

May 02 – United States Secretary of State John Kerry visits Sri Lanka in an attempt to renew ties between the two countries.

May 14 –  Vithya Sivaloganathan (18) is found brutally raped and murdered in Pungudutheevu, Jaffna.

May 12 – The BBC reports that Sri Lanka has become the first country to comprehensively protect all its mangroves.

July 31 – Several gunmen open fire at an election rally in Colombo north, killing two. Minister Ravi Karunanayake who is at the event is unharmed.

August 11 – Body of national ruggerite Wasim Thajudeen is exhumed in order to check for signs of torture as a part of an investigation which resumed after three years into his death.

September 11 – Four and a half year old Seya Sadewmi goes missing. Two days later her raped and murdered body will be discovered next to a small canal several feet away from her house.

November 20 – The Sirisena-Wickremesinghe administration’s first budget is presented in Parliament.

December 11 – A suspect is arrested for the murders that occurred in Kotakethana and Kahawatte. The suspect’s DNA samples are positively identified with a common DNA sample that was gathered from previous crime scenes.

December 17 – Co-Cabinet Spokesperson, Minister Rajitha Senaratne announces that the government will go ahead with foreign-funded projects initiated by the previous government, including the Port City Project.

December 22 – A Saudi Arabian court overturns a death-by-stoning sentence meted out to a Sri Lankan housemaid.

That’s Roar’s wrap-up for the year 2015, watch out for our Weekly News Roundup on Friday. Here’s to making headlines for all the good reasons. Happy New Year, folks!