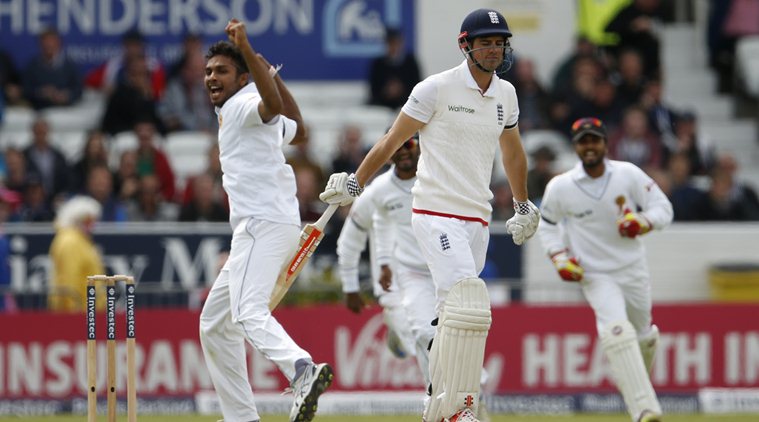 Where do you go when you’ve lost a Test match within three days (two,  if you count actual match-play time)? When you’ve only lasted 71 overs across two innings? When the team total doesn’t even reach the top score of the opposition batsmen, not once but twice? What school of thought do you adhere to, as you attempt to make sense of what has transpired?

Is it the “forget it ever happened and move on” option? Maybe it’s the “we will look at where things went wrong” reassessment approach. Or perhaps the “taking the positives” spin. Angelo Mathews feels it was “embarrassing” more than anything else. It was. On the surface, the horrific loss at Headingley is an open and shut case of Sri Lanka’s inaptitude. However, a close look may reveal a more nuanced picture.

The Trouble With Headingley

First, the conditions; the early May weather has always been a time honoured nemesis of sub-continental teams. Headingley is not exactly a holiday destination if you are Sri Lankan. 2014 was surprisingly mild as Leeds goes, which clearly aided Sri Lanka’s triumph. 2015 was a colder affair, albeit with a much drier pitch when New Zealand toppled England. 2016, however, was Headingley on an acid trip.

The groundsman cooked up a lively green concoction that the Sri Lankan batsmen could not swallow in two attempts. The gods of swing played a “best of” album of conditions to compound matters further. Graham Ford indicated prior to the tour that Sri Lanka was preparing for conditions by practising on pitches that are similar to England’s. The team held a camp in Kandy in a bid to acclimatise. If there is a single groundsman in Sri Lanka who could have conjured up conditions even remotely close to Headingley, his credentials would have had to come from Hogwarts. Sri Lanka had waded in a baby pool, but in England, they had to face a rough storm instead.

Then there were James Anderson and Stuart Broad. Sri Lanka’s only hope against Anderson was that his remarkably poor figures at Headingley would live up its reputation once again. However, with conditions and the pitch being what they were, it would have been a cricketing anomaly if he’d averaged forty again. Anderson was bowling art. At times, his outswingers were so perfect and beautiful that seeing them over and over again had a hypnotic effect ‒ an effect that seemed to scramble the minds of the Sri Lankan batsmen. As a viewer, watching deliveries leave his hand, aimed in towards the right-handers, then slowly kiss the air to nudge away from the batsman millimetre by millimetre, pitch and then move away further, made one feel like time had slowed down. Though, for Sri Lanka’s batsmen, there was never enough time. All they saw was Anderson coming at them over and over again.  It was a relentless assault.

It seems remarkable that Broad, the number one ranked Test bowler in the world, was playing a supporting role here. Broad is a bowler who is now at the zenith of his powers. Together with Anderson they formed a lethal pairing that Sri Lanka had not experienced for quite some time. Sri Lanka’s batting destruction against these two was by no means an isolated incident. Better batting sides with more talent and richer experience have come up against these two bowlers and found themselves embarrassed in England. Australia in 2015 at Trent Bridge, India in 2014 at the Oval and Old Trafford point to instances that Sri Lanka can compare their own debacle to.

Apart from the preparations back home, Sri Lanka’s two tour games also did not set them up in any way for the trial at Headingley. Up against two Division Two county teams, who fielded second-string attacks, did not come close to what they were about to be exposed to.

Highlighting these facts is not an exercise at providing excuses for the loss. It is to frame it in a more balanced standing than dismissing Sri Lanka as a team with no hope. There were many aspects of this game that Sri Lanka did have control over that they failed to master.

When they batted, their judgement was indecisive on what to leave. The conditions and the high-class bowling that came at them left no margins for error. Sri Lanka’s batsmen, unfortunately, tried to dance on this thin line and paid the price. Bowling of this quality demands the tightest of techniques. Sri Lanka’s was feebly loose. When they were bowled out for 91 in the first innings and asked to follow on, they had an immediate opportunity to  redeem themselves. Yet, the same mistakes were made time and again. That was a criminal offence and one that Sri Lanka should not have allowed themselves to make. At least, not quite that easily. Mahela Jayawardene said that Sri Lanka did not appear to have a game plan to counter the moving ball. On the evidence of the two innings at Headingley, you could not find fault with that assessment.

Sri Lanka’s problems, however, started when they bowled. Shaminda Eranga, Nuwan Pradeep, and Dushmantha Chameera had the same ball, the same pitch and similar conditions to what England enjoyed. Yet, they failed to fully capitalise on it. They began well when England were reduced to 83 for 5. But there were plenty of deliveries that England did not need to play. The constant danger and threat that Anderson and Broad created with their bowling was not something that the Sri Lankans could emulate.

Bairstow, together with Hales, put on a match-defining partnership. Image courtesy: skysports.com

Having had the hosts in such a difficult position, Sri Lanka let it slip. They opted for what appeared to be a team meeting tactic on bowling short to Jonny Bairstow as opposed to staying with keeping the ball up; the tactic that was required and more importantly working for them at the time.. This allowed Alex Hales and Bairstow to put on what in the end proved to be the match-defining partnership.

Angelo Mathews’ defensive streak in his captaincy also reared its ugly head on day two. At stumps on day one, England were 171 for 5, which meant that Sri Lanka were still very much in the game. By allowing Bairstow and Hales to settle down with men on the boundary, Mathews and Sri Lanka lost the opportunity to keep England to a modest total. Later, Bairstow was dropped by Pradeep on 70. There were other chances put down as well, although not as costly.

These were not problems England was inflicting on Sri Lanka. This was self-destruction. If Sri Lanka is serious about winning Test matches, it is these moments that they can ill afford to squander. For a team that now lacks any super stars, perhaps apart from Mathews and Rangana Herath, teamwork, strategy and the basics are not pillars they can play loose and fast with.

Lessons Sri Lanka Should Learn From This Defeat

In the end, it was four players who took the game away from Sri Lanka. And that is what happens with good sides where performances from individuals can turn a contest. This should give Sri Lanka some encouragement as they head to Durham. Though there exists an obvious mismatch in class between the sides, had it not been for a few self-inflicted wounds, the game may have headed down a different path when they bowled.

Where batting is concerned, Sri Lanka certainly needs to be tighter with technique, and more assured in their judgement. The basic facets of their game must always be on point. Lack of discipline in those areas will always be punished by strong opposition.

This tour more than any other is meant to be a learning curve for this young side. And that is the ultimate lesson they must take away from Headingley. Sri Lanka knew that this tour would test every inch of their resolve. They knew England would come at them hard. At Headingley, they faced the full wrath of that reality. Now they must respond. There is a still a series to be saved. They cannot afford to repeat the same mistakes. They must absorb what happened, learn, adapt, and face their demons head on.