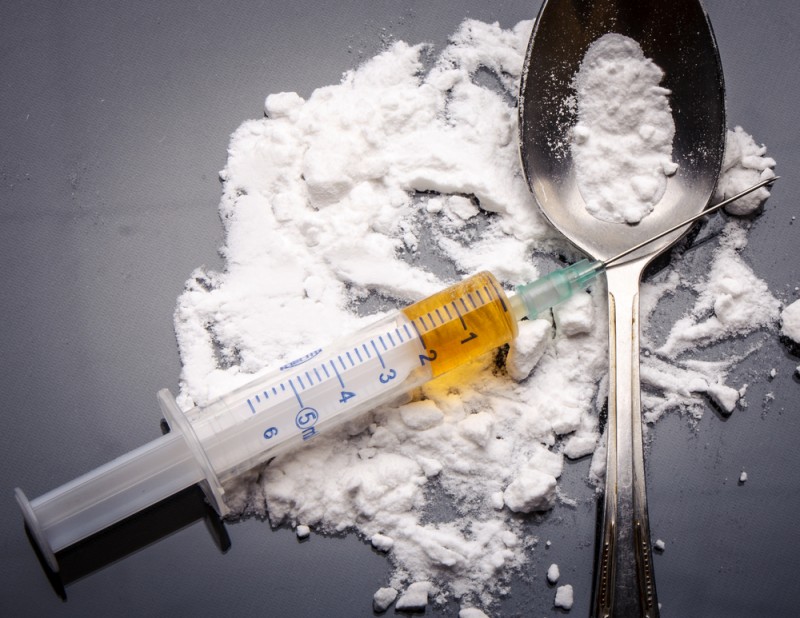 It isn’t unusual to read reports of illegal narcotics being nabbed by Sri Lankan authorities during raids or thanks to tip offs, but one of the more recent drug hauls caught a lot of media attention. This was not only because of the significant amount of narcotics taken into custody, but also because of the extent of the smuggling operations in place, as revealed by ensuing investigations.

The recent arrests of fourteen foreigners and three Sri Lankan masterminds behind a part of Sri Lanka’s heroin racket brought to light a prominent drug route used to smuggle heroin to Sri Lanka. The arrests came after a joint offshore operation conducted by the Police Narcotics Bureau (PNB) and the Sri Lanka Navy.

Police and Navy managed to track down and seize 110 kilograms of heroin from a shipping vessel, some of which is pictured here. Image courtesy Police Narcotics Bureau.

Believed to be the largest heroin haul nabbed at sea, the Police and Navy were able to bring to shore 110 kilograms of heroin with a street value of Rs.1.1 billion (USD 7.5 million). Eleven of the fourteen suspects arrested were on the boat bringing the heroin from Pakistan to Sri Lanka, while the three other foreigners were later arrested on land.

While this particular operation and its results are noteworthy in itself, it was also revealed that one of the arrested foreigners was a 12 year old Iranian boy involved in this major heroin racket.

“The PNB was able to apprehend a vessel that was carrying the haul of heroin off the Southern coast of Sri Lanka. Around 110 kilograms of heroin were found in 100 parcels. The haul of heroin, which has a Sri Lankan street value of over Rs 1.1 billion, was aboard a schooner sailing from Iran,” the Spokesperson said.

The vessel from which the heroin was confiscated a week ago. Image courtesy Police Narcotics Bureau.

One of the leading heroin distributors in Sri Lanka – Mohammed Muwas Mohammed – was arrested at the Bandaranaike International Airport (BIA) when he was returning from India early Monday morning (April 4). Two other Sri Lankans who are known drug racketeers surrendered to the Police shortly after Mohammed’s arrest, the Police Spokesperson told Roar.

Of the fourteen foreign nationals (ten Iranians, two Indians, one Pakistani, and one Singaporean) thirteen were further remanded until April 19 by the Fort Magistrate’s Court. The 12 year old boy was sent to the Makola Child Probation Centre after the embassies of the relevant countries were informed of the arrests.

How Does The Heroin Get Here?

According to the Sri Lanka Navy, the heroin dealers of Pakistan and Afghanistan have been engaging in large scale drug trafficking activities in collaboration with the drug dealers in Sri Lanka. It was further revealed that the consignment of drugs are transferred by foreign vessels to the sea areas of Sri Lanka, and brought ashore by multi-day fishing trawlers in the guise of engaging in fishing. This stock is then transferred to Colombo via the Southern Expressway. This drug racket has been recognised as a well-organised business running without detection of the authorities.

Following the joint offshore operation by the PNB and the Navy, heroin related arrests have increased around the island, according to the Police. It has also been noted that trafficking of heroin into Sri Lanka by sea has been steadily increasing.

A man was arrested in Point Pedro for possessing 185 grams of heroin. Pictured here are authorities who confiscated the heroin. Image courtesy Department of Excise.

This past week alone, seventeen heroin related arrests were made all around Sri Lanka.

Notably, a source from the Department of Excise, who preferred not to be named, told Roar that a suspect was arrested in Point Pedro on Monday, with 185 grams of heroin worth nearly Rs. 2 million in his possession. The 24 year old suspect was apprehended when he was transporting the narcotics from Point Pedro to Jaffna. The arrest came as a result of a raid conducted after several investigations carried out by the Excise Department for nearly a month.

The suspect, who is a fisherman by profession, had received the heroin haul from an Indian national in the middle of the sea and was in the process of bringing it to the island for distribution when he was arrested. He was produced before the Point Pedro Magistrate’s Court and has been remanded till April 18.

A day after the Point Pedro arrest, four suspects were arrested from a house in Anguruwatota after the Police received information that the house was being used as a main location to packet heroin for distribution. The four suspects were arrested while they were in the process of making 900 packets of heroin valued at Rs. 4 million. It was also revealed that of the four,  two were a mother-daughter duo involved in the heroin business.

Of the other twelve arrests  made during the course of a few days, three were female (aged 41, 26 and 50) while nine were male.

Two suspects were arrested in the Weligama Police Division with ten grams and seven grams of heroin respectively. Another was arrested with two grams and 610 milligrams of heroin near the Nugegoda flyover by the Mirihana Special Narcotics Raids Unit. Three others were arrested from Peliyagoda, Slave Island, and Borella police divisions during raids.

Yet another two suspects were taken into custody in Grandpass and Wattala. One suspect was arrested from Grandpass with 25 grams and 75 milligrams, while the other suspect was apprehended from Wattala with 206 grams.

In 2014, the total number of drug related arrests was 67,025, a 1.5% increase when compared with the year 2013. Out of the total drug related arrests made in 2014, 35% were heroin cases, and 65% were cannabis cases. According to recent reports, this year the police have confiscated over 155kg of heroin so far.

Also, according to a 2015 report by the National Dangerous Drugs Control Board, one of the main indicators used to assess the level of illicit drug trafficking is through these arrests and confiscations. It has also been revealed that Sri Lanka is one of the main transit points for drug trafficking; drug traffickers smuggle the drugs from Pakistan and India, to Europe and the West, through Colombo and Malé. Throughout the past five years, heroin seizures and information gathered from arrests have revealed that heroin from Southwest Asia (“brown sugar” heroin) is mainly smuggled from India and Pakistan, and mostly originates from the Golden Crescent region. During the last five years, 129 foreigners were arrested in Sri Lanka for drug related offences, including 14 Indians, while 27 Sri Lankans were arrested abroad for offences of the same nature.

The Police Narcotics Bureau, along with other law enforcement agencies, claim to be ever vigilant about heroin that might possibly be smuggled into the country via sea and air; should their investigations prove fruitful, we can expect to read more reports of drug busts. Watch out for our Weekly News Roundup for any updates on this issue.