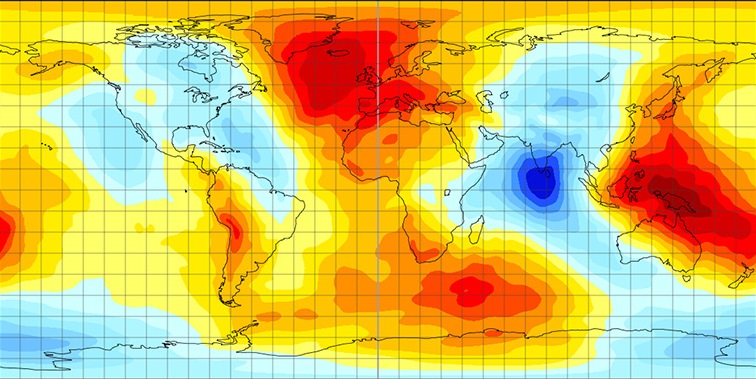 Or at least, that’s what Physics says. The European Space Agency’s (ESA) four-and-a-half year Gravity Field and Steady-State Ocean Circulation Explorer (GOCE) mission aimed to shed light on what makes up the Earth beneath the surface, by tracking the Earth’s varying surface gravity. What was found, amongst other things, was that the Earth is actually lighter in some places than others. And where on earth can we find the least gravity? At a point in the Indian Ocean just south of Sri Lanka.

Even though our basic model of the Earth as a ball slightly elongated along the equator works well for most intents and purposes, newest evidence from the GOCE suggests that, with regards to surface gravity, this is an approximation at best. Scientists have devised a new shape, called the geoid (see image), whose surface is such that every point on it has the same gravity. Understanding this means not only understanding more about our subterranean planet, but can point at underground energy sources ‒ both conventional and renewable ‒ as well as shed light on how the oceans and tides work.

How are we supposed to look at geoids, like the one above? Given that gravity gets weaker the farther you are from the centre of mass, the dip (cyan & blue areas) you see around Sri Lanka highlights its low gravity, as it needs to be ~80m closer to the centre of the Earth to feel the same gravity as other places. On the other end of the spectrum, the bulges (red & yellow areas) are places with higher than average gravity, and hence need to be farther from the centre of the Earth to feel the same gravity. While 80m in the context of 12 and a half million metres (the diameter of the Earth) is somewhat insignificant, there are some very tangible reasons and consequences for even such a small deviation.

Why is it, then, that the gravity on the surface of the Earth varies, depending on where you’re looking? There are a multitude of reasons for this, the most significant of which arises from the fact that the Earth is rotating around the poles, causing the Earth to literally become flattened around the equator. This is, in essence, due to the same (centrifugal) force you feel pushing you outwards when spinning in a carousel; the Earth around the equator feels this force, making it bulge outward slightly. This means that the distance from equatorial areas to the centre of the Earth is, on average, more than that from the poles to the centre of the Earth. Hence, places on the equator feel less gravity than the poles, just because the Earth is spinning. This is the biggest reason Sri Lanka – like other places close to the equator – has a lower than average gravity.

If you look to the right of the image though, you’ll see other equatorial areas, like Indonesia and Malaysia, with an above average gravity. This highlights how the Earth’s rotation isn’t the only culprit behind our varying gravity. Other factors like changing altitudes of places on the surface of the Earth (remember that gravity gets weaker the higher up you go) and varying densities of matter beneath it contribute to minute (yet measurable) deviations of surface gravity. It’s easy to imagine that there is less gravity on the peak of Mount Everest than there is at the Dead Sea but, as tends to be the case with reality, it’s not that simple. While this is true, altitude isn’t the whole picture, and the very fact that Mount Everest is a massive slab of rock weighing somewhere around 3.4 billion metric tonnes affects the gravity you feel on and around it.

Why Bother With Gravity?

The one tonne and 5 m long GOCE orbits the Earth at an altitude of 260 km, and uses mainly solar energy along with xenon thrusters for propulsion. Image courtesy esa.int

While this all sounds interesting, why exactly did the ESA spent some €350 million and half a decade on this mission? Firstly, while we can understand and track gravitational variations due to the Earth’s rotation and surface-level geological features such as mountain ranges and underwater trenches quite easily, studying what lies beneath the crust is a more complicated affair. A crucial first step to understanding what exactly it is that lies beneath our feet, and how it moves around, is studying the record its gravity leaves behind. For example, one could tentatively conclude the existence of some lower density stuff under Sri Lanka, given that it has an exceptionally low surface gravity.

Tracking the Earth’s gravity can also help us find deposits of oil and gas by allowing us to garner the densities and temperatures of different underground areas. The GOCE mission can also be used to help find sources of clean and sustainable geothermal energy. This type of energy covers anything we get from the heat under the surface of the Earth, ranging from volcanoes to hot springs. Understanding what makes up our planet beneath the surface, and how exactly it behaves and moves around, will allow us to tap into this new source of renewable energy – a necessary step in a world facing the rise of anthropogenic climate change.

There’s also the Ocean Circulation Explorer part of GOCE to consider. A big part of tracking the Earth’s gravity is to accurately map the way the oceans move, with the GOCE detailing the ‘the most accurate model of ocean current speeds to date.’ Understanding how 71% of our planet behaves is pivotal to our having a holistic picture of the Earth, and will help us observe changes in oceanic behaviour, allowing us to know how we affect the world around us.

All in all, there are some very real applications of the insight gained from the GOCE experiment. We also now know a lot more about the world we live on, thanks to the ESA’s mission, and as Sri Lankans we can afford to cheat a little on our diets, because we weigh (slightly) less here than anywhere else on Earth!