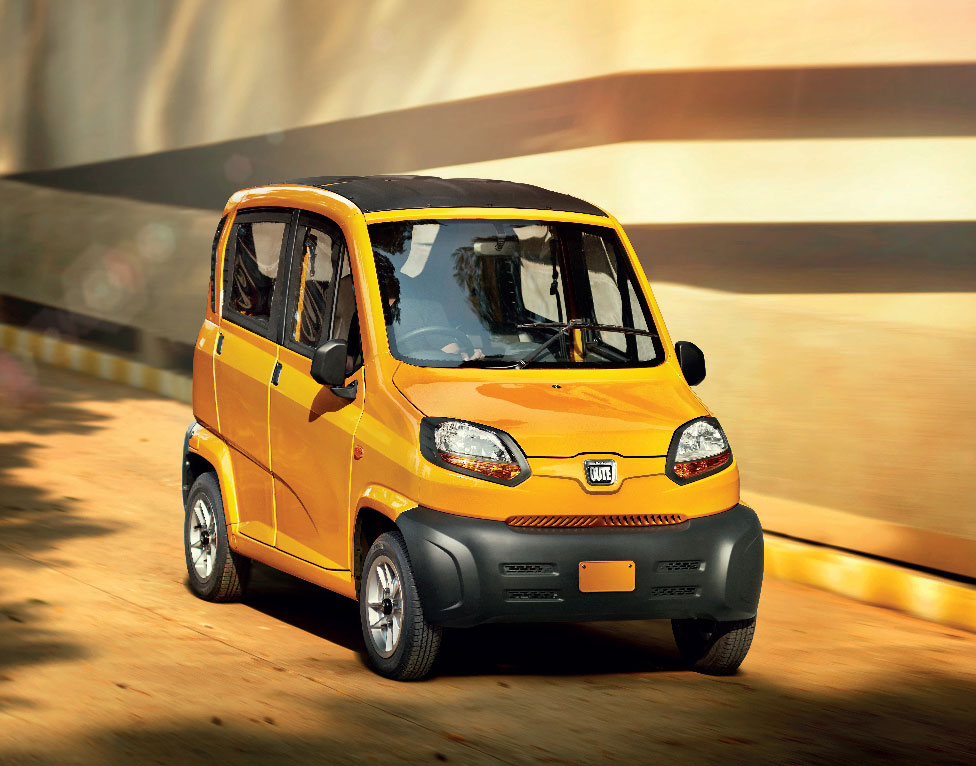 Is Sri Lanka Ready For The Qute?

Our friendly neighbourhood “tuk tuk” has always been one of the most convenient modes of transportation for low budget commuters. For decades, these three-wheeled vehicles have been roaming (sometimes owning) Sri Lankan streets, but now, a fancier four-wheeled distant relative of the tuk tuk has appeared on the scene ‒ will the Bajaj Qute mean three-wheelers are seeing the end of their days?

With the new tax structures that were introduced on May 26 for imported cars and three-wheelers, many a discussion has revolved around the pros and cons of the three-wheeler versus the Bajaj Qute.

The argument, however, boils down to which is more practical, safer and user friendly ‒ the tuk or the Qute?

What Exactly Is The Qute?

Not quite three-wheeler, not quite car. Image credit Bajaj

The Bajaj “Qute”, previously known as the RE60, is a four passenger quadricycle that looks like a small car, but isn’t.

According to the Bajaj company’s website, the Qute is a vehicle that has the characteristics of both a three-wheeler and a car, essentially a hybrid of the two.

“It is a new-age vehicle that carries the attributes of a three-wheeler as well as those of a car. It is compact, lightweight, and has a carbon footprint that is 37% lesser than the smallest car available. Like a car, it is spacious and has an enclosed body structure, giving the driver and passengers a comfortable and safe ride. Also, it has adequate space for luggage and runs at optimum restricted city speed, which provides safety for all,” the company said in its statement.

It went on to say that “Qute has been designed in response to evolving requirements of low cost, last mile public transport across the world by optimizing size, weight, cost and speed.”

The Qute on the inside. Image credit: vicky.in

The Qute is powered by a 200CC single cylinder engine with a capacity to generate power output of around 20 bhp. The four-wheeler weighs only 400 kg due to its metal-polymer monocoque body.

Is The Tuk Tuk Out Of Fashion?

Does the arrival of the Qute mean the end of the tuk life? Image credit: three-wheel-quotes.tumblr.com

Bajaj introduced the Qute to Sri Lanka as an alternative to the three-wheeler and it will most likely be launched soon. While several characteristics attribute this vehicle to a small car, the Qute was created to replace three-wheelers, thus it was created better than a three-wheeler.

Despite our preference for and dependence on three-wheelers for their availability and convenience, we must admit that they have several drawbacks, too. The three-wheeler may be a handy vehicle on a hot day when one is reluctant to take an overcrowded bus. However, it can be quite troublesome to travel in a three-wheeler on a rainy day. The Qute appears to do away with this problem.

While India has yet to accept their own creation, the Bajaj Qute has been launched in Turkey, and introduced to Sri Lanka, and is making its way to fourteen other countries too.

The Bajaj company has made it clear that its primary target customers are the owners of three-wheelers. Bajaj Qute has been designed keeping in mind that it is not meant for intercity or expressways – just like a tuk-tuk.

Furthermore, Finance Minister Ravi Karunanayake recently suggested that the Bajaj Qute could be introduced to the Sri Lankan market for a price less than that of a three-wheeler.

What The Tuk Tuk Drivers Have To Say

Of course, at the end of the day, the success of the Qute in Sri Lanka will depend partly on its future drivers. What do our local three-wheeler drivers feel about this potential new vehicle on the streets? We spoke to a few drivers to find out.

Sarath Perera said that he was considering selling his three-wheeler and buying a Bajaj Qute, but also noted, “I don’t want to rush into anything, because I don’t know how it will be accepted.”

Jayantha Hettiarachchi, meanwhile said that he hadn’t heard about the Qute at all. “I have been driving my three-wheeler for over a decade now and I love my vehicle. I cannot think of replacing it. But then again, I am growing old and so is my vehicle. I suppose we have to give way to new things.”

Alternatively, Sumith Prasanna is of the impression that “The Bajaj Qute sounds too posh for us,” but added that “if the price is less than a three-wheeler, I suppose we could try it out. It all depends on how the consumers would accept it, though. We’ll see how it goes. I was always a three-wheeler driver not a cab driver and these new things sometimes hurt my head.”

Is The Qute As Safe As It Is Cute?

According to Bajaj, the Qute was rigorously tested on multiple parameters, terrain and weather conditions in India. It was put through over 3.2 million km of testing. These tests apparently check for “structural durability, suspension, performance, handling, efficiency, and all forms of abuse.”

However, the Qute does not seem to have done too well at these tests, securing only a one-star rating out of five in crash tests performed by the Brussels-based Euro New Car Assessment Programme, (Euro NCAP) in April 2016.

The video of the crash test shows that the safety of the Qute is significantly lesser than that of a normal motor car. However, the Qute is reportedly somewhat safer than the average three-wheeler, and seeing as it is being considered as a replacement for the three-wheeler, this is worth taking into account.

All that aside, we Sri Lankans are quite attached to our colourful (albeit sometimes rickety) three-wheelers with their (not always) inspirational quotes, cheesy slogans, and chatty drivers. So the question is, are local commuters ready to move on from the tuk tuk culture to a new alternative? And will the Qute be a convenient, attractive, and inexpensive enough solution?