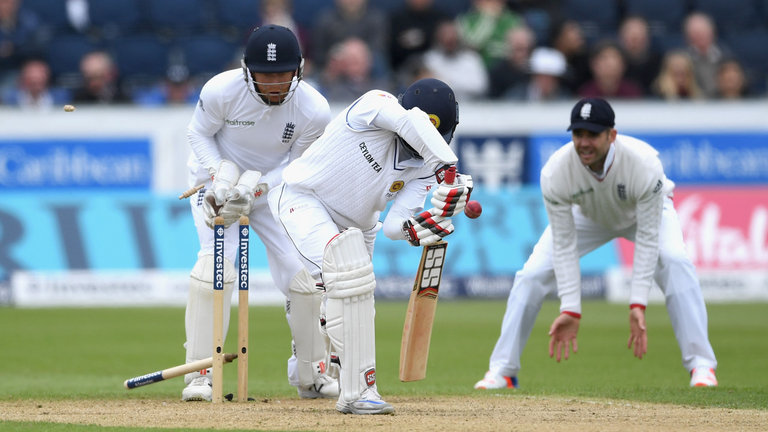 In the end, the inevitable result of the second Test at Durham was only extended by some late Sri Lankan resistance. Since then, a lot has been made of Angelo Mathews and the team about the Sri Lankan fight.

And rightfully so, resolve and defiance in the face of another catastrophe are qualities that are to be admired. Yes, there was finally some spine shown by the tourists. Yes, there was another back-to-the-walls century from Dinesh Chandimal. Yes, there was a 300th wicket for Rangana Herath and some late order runs, both entertaining and vital. And yes, Sri Lanka finally crossed 120 runs as a team in their fourth attempt on this tour.

Before the final innings at Chester-le-Street, and since December 2014, Sri Lanka had only managed to bat in excess of a 100 overs an astonishing five times in 26 attempts. Three of those 5 times have been at home in 15 innings. And only twice in their most recent 10 innings.

On the current England tour, Sri Lanka’s innings have been 36, 35 and 43 over affairs. It makes for some dismal reading. This has arguably been the root of Sri Lanka’s abysmal Test record in the last two years.

They have been unable to lay a foundation from where they can launch their hooks into the game. As a result, they’ve always had to fight to stay in the contest, as opposed to driving themselves into a position authority from where they can dictate terms.

As the records indicate, this problem has been plaguing Sri Lanka both home and away: on pitches and conditions that are familiar and foreign, with largely the same personnel in the batting line up. So the idea that this is just an issue when they travel creates a wrong perception.

With a home series against Australia and then away tours against Zimbabwe and South Africa at the end of the year, this has to be an area that Sri Lanka addresses with their batting if they are to avoid another season in the abyss in Test cricket.

Rangana Herath took his 300th Test wicket in this game. An inspiring achievement if ever there was one. He then backed it up with crucial runs to save Sri Lanka from humiliation.

He has also taken only 3 wickets at 53 on this tour.

These figures are less than inspiring. But then, we need to assess Herath’s role when he’s overseas. He is not really expected to take wickets. Instead, Mathews relies on him for control more than anything else. He’s someone to hold an end up. His figures in New Zealand, with very similar conditions to England, are the same with 8 wickets at 63. At home he’s king. On tour, he’s more of a King’s Guard. Important, but peripheral.

The question then becomes, is this what serves Sri Lanka best?

When Dhammika Prasad was injured, this attack lost their leader even before a ball was bowled on this tour. Then Dushmantha Chameera was lost before the second Test. Herath’s role instantly became more crucial, but the focus as a wicket taker never really shifted to him.

It hasn’t been for lack of trying on Herath’s part. He’s been furiously unlucky on this tour. Had a couple of LBW shouts gone a different way at Leeds, we could well be spinning a different yarn. However, he still lacks the bite and spin that makes him a potent weapon at home. The pitches themselves have not been conducive to his type of bowling, with only the fourth day second innings spell at Durham truly evoking memories of what Herath is capable of. But it was far too late to matter.

Sri Lanka needs to figure out ways to take wickets on tours such as this. If none are really expected from their premier spinner, then that idea must come under scrutiny.

On the immediate horizon is Dilruwan Perera, who is an obvious replacement should Sri Lanka choose to go down this route. He’s a bowler who extracts more spin as an off-spinner and has the same accuracy. And so far, he has performed whenever the opportunity has been afforded to him. Further down the line there is Tharindu Kaushal, the mystery spinner, and the promising leg-spinner, Jeffrey Vandersay, who is bursting with talent.

Whether Sri Lanka is even entertaining the thought of replacing Herath is questionable, though.

What of the rest of the attack then? Losing your two best bowlers on an away tour is like losing a leg before a tennis match. You are going to struggle a fair amount. But the pace attack managed to reduce England to 83 for 5 at Headingley and then to 297 for 6, on a much easier batting strip at Durham.

Then at Headingley, Sri Lanka abandoned their plans to keep the ball up and adopted a short ball strategy that played into the hands of the set English batsman. At Durham, Mathews was the architect of dire cricketing tactics that saw fielders in the deep with no intent of attacking to finish off the England tail. In the first Test too, Mathews let go of an opportunity early on Day 2 to keep the pressure on Jonny Bairstow and Alex Hales by being far too negative in his approach.

Without other experienced players to draw on, Mathews’ captaincy has unravelled a fair bit in this series. From a poor judgement of reviews – one where he should have reviewed and didn’t, and one where he did review when he should not have – to inexplicable tactics at crucial segments in the play when the opposition was under pressure. Sri Lanka’s captains’ ideas and decision making have swung like a pendulum to Sri Lanka’s cost.

The Haunting of Bad Fielding

Perhaps, what will be most disappointing for Sri Lanka, will be their continued lapses in the field. For a team that is impoverished when it comes to wicket taking opportunities, Sri Lanka put down an awful lot of chances that come their way.

At Headingley, they dropped 3 chances, including Bairstow and Hales, which had a significant impact on the game. At least Durham began in a positive light as Sri Lanka appeared to have put those demons to bed on Day 1 when they held onto some sharp chances. ‒ only to have them come back to haunt them stronger on Day 2 as they grassed another three 3 chances crucially off Moeen Ali on 36, who went on to score 155.

This is one aspect of their game that Sri Lanka have only themselves to blame. There is no Jimmy Anderson or Bairstow or Hales or Root involved. It is all on them. As if things could not be worse, these were not difficult chances even by First Class standards. Graham Ford and the coaching staff have some serious work to do here, to bring Sri Lanka’s catching back to up international standards.

Don’t Scrap For A Part, Fight For The Whole

Chandimal’s talent showed through – one of the better aspects of the match. Image credit: espncricinfo.com

Of course, there were positives as well. Dinesh Chandimal showed what he is capable of from his preferred number six position. It was an innings of great resolve and courage.

The batting unit overcame the biggest first-innings deficit in Test history to make England bat again. This was the result of a tweak in the approach and attitude towards being positive and more proactive in how they leave the ball, run between wickets, and shot selection.

In the words of Kaushal Silva they wanted “everything they did to be positive”. The second innings showed glimpses of the talent there is, albeit in a much docile pitch compared to Headingley. They battled for over 100 overs again. They fought. They showed that there is still some life left in them.

Following the loss in the first Test, Michael Vaughan, the former England captain, said that Sri Lanka is better off playing Division two cricket. He was, of course, referring to a future where the Test cricket ladder could be restructured into two divisions, with the second division reserved for the “lesser teams”.

Lesser teams are ones that can be satisfied that they stayed in the competition. That they had a good day in the face of ten bad ones. That they fought valiantly but lost. That a few isolated sparks is as good as they will get.

Sri Lanka should not be content with that mentality – that a couple of good days are the best they’ve got in them. That showing a bit of fight is all they are good for. If Sri Lanka takes the chances that present themselves, they may not have to fight as hard for scraps. They could actually win the whole thing. That belief, above all, is what they should fight for.