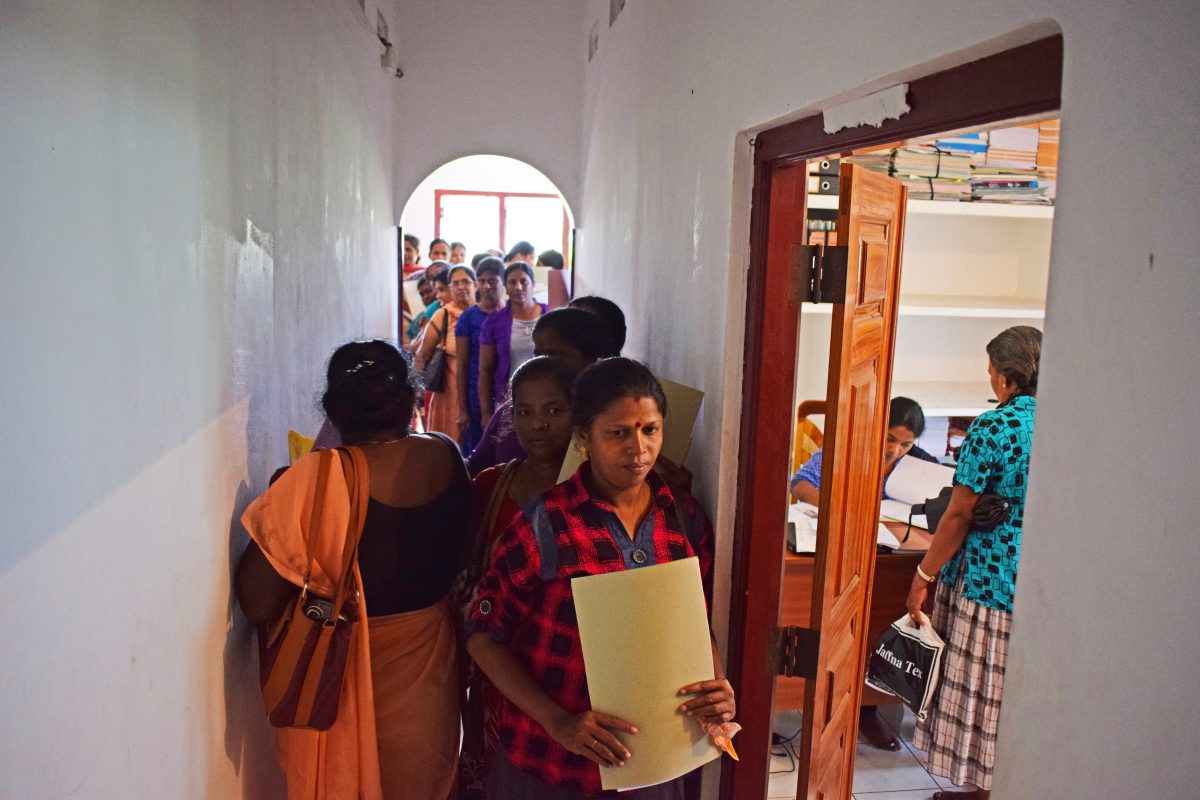 Hundreds of displaced families lined up outside the Vavuniya Divisional Secretariat (DS) yesterday (February 22), precious documents in hand, hoping to find answers about the legal status of lands they were resettled on by paramilitary groups during the war.

Perhaps the most stunningly organised use of the Right To Information Act yet, the entity responsible for this is a little-known youth organisation called Association for Friendship and Love (AFRIEL), which was founded in 2013.

According to AFRIEL co-founder and chairman Ravindra De Silva (32), the youth organisation has been cooking up a campaign to help war-affected families in the north and east utilise the RTI for months now.

“We have documented thousands of cases of human rights violations but the government has rarely provided information. We struggled over how to move past this and thought that the RTI might be a good solution – so we started organising forums at the village level,” says De Silva.

Families gather at the AFRIEL office in Vavuniya to get their documents in order ahead of RTI applications.

Since the enactment of the RTI, AFRIEL has assisted families in making around 700 applications – usually relating to issues of military occupied land or disappeared loved ones. De Silva says they hope to facilitate 3,000 applications by the end of the month.

Aside from facilitating applications from families, AFRIEL has also launched some of its own, having visited every DS office in the Northern Province.

Says De Silva, “We asked about how much land is being occupied by the military, and how much of this is state-owned and privately-owned. We have also asked for the names of the original owners of the private lands.”

“We asked for details of disappeared people in the area. Some families have made complaints to the Human Rights Commission about such issues and not heard back for over 15 years. We want to use the RTI to follow up on these cases.”

Local government officers have been, for the most part, extremely forthcoming, according to De Silva. All of AFRIEL’s RTI applications have so far been accepted and acknowledged without charge. Already, two DS offices have promised to provide the information requested.

But AFRIEL’s plans don’t stop at northern government offices. The youth organisation hopes to make a trip south to Colombo with around 300 victims by the end of the month – to file RTI applications at the Resettlement Ministry, Land Ministry, and Defence Ministry among other authorities.

War-affected families have long lobbied the government for answers.

Human rights activist and adviser to INFORM, Ruki Fernando, expresses cautious optimism about AFRIEL’s campaign. Fernando himself has been involved in helping war-affected families look for disappeared loved ones and military occupied land long before the enactment of the RTI.

“It is too early to tell what the results will be from these applications. Public authorities tend to be very choosy when it comes to political issues. Requests regarding military occupied land or disappeared people are very contentious and come with a lot of local and international lobbying,” says Fernando.

Given the recent resurgence of protests in the north, Fernando says the RTI can work in tandem with popular demonstrations to appeal to not only the government, but also media and civil society in Colombo to play a role in resolving conflict issues.

“In principle, I want to use the RTI in my own work with war-affected families. But I will wait a little until the results start trickling in. For too long I’ve been banging my head against statutory institutions, wasting money and taking risks with little achieved in the end.”

An AFRIEL worker instructs families on the RTI process.

“One government worker told me that he didn’t realise just how many people in the region don’t even have birth certificates or national IDs. So I think we can expect some systematic changes as DS offices are forced to coordinate more with Grama Niladharis, collect more information, and learn new processes,” says De Silva.

But it’s not just government workers who are learning through this process. Citizens, too, are familiarising themselves with local government mechanisms and the various tools at their disposal to seek redress for grievances.

AFRIEL’s network of young volunteers spans over 142 villages in the north.

Originally from Galle, De Silva found himself in Vavuniya when helping monitor the 2013 Northern Provincial Council elections as the regional coordinator for Peoples Action for Free and Fair Elections (PAFFREL). During this time, he befriended several local youth, with whom he discussed issues pertaining to freedom of expression and post-war traumas.

“We just started as friends and discussed how we can help each other. Eventually, we decided to mobilise more youth to get involved in organising and coordinating with local government to solve long-standing issues,” says De Silva.

Today, AFRIEL has a growing network of ‘citizen watchers’ throughout the north. De Silva says that the intention is to recruit two youths from every village and train them to identify community grievances and facilitate solutions through the island-wide network.

Editor’s note: The opening lines of this article previously stated that families were looking for answers regarding lands occupied by the military. This has been amended to read “answers about the legal status of lands they were resettled on by paramilitary groups during the war.”