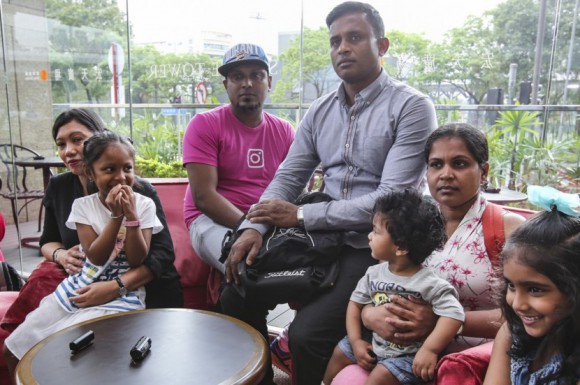 The Sri Lankans and Filipino who sheltered whistleblower Edward Snowden in 2013 are in fear of being locked up in immigration detention centres and separated from their children. Read more on Roar Reports.

In the wake of the Hong Kong government’s rejection of their asylum claims late last week, the Sri Lankans and Filipino who sheltered whistleblower Edward Snowden in 2013 are in fear of being locked up in immigration detention centres and separated from their children.

The Sri Lankans—Supun Kellapatha and Nadeeka Nonis, along with their two children and Ajith Pushpakumara—and Filipina Vanessa Rodel and her daughter had sheltered former NSA contractor Edward Snowden in their homes when he was on the run from the American government for leaking information about their illegal civilian surveillance programmes. Following the exposure last year of the crucial role they played in sheltering him, they have faced a series of trials and tribulations at the hands of the Hong Kong government, culminating in the rejection of their asylum claims. With the Canadian government yet to respond to their appeal for asylum in Canada, time is running out for the families.

Speaking to Roar, Robert Tibbo, the lawyer representing both Snowden and the asylum seekers, claimed that the Hong Kong government’s decisions were “prejudicial”, “completely unreasonable”, and “weren’t made in good faith.”

He explained that the screenings were rushed, incomplete, and grossly unfair, and took place  when Tibbo was out of the country and therefore unable to represent his clients. Both Kellapatha and Nonis did not receive a proper screening, while Pushpakumara was asked a few superficial questions. He added that Rodel’s screening took place not in person, but entirely in writing. “Not one question was asked about the welfare of the children, or about the children’s own refugee cases . The children’s cases were never screened,” he said. Kellapatha and Nonis’s two children and Rodel’s daughter are all stateless.

When asked if any of his other clients had also been screened and denied asylum, Tibbo said, “Of all my clients, more than 50 of them, only those who assisted Mr. Snowden have been targeted and screened—no one else.”

Currently, Tibbo is in the process of appealing against the decision. But he is concerned that the time frame he has been allowed—of two weeks, ending May 25—is too restrictive. “I need more than 13 days to file the seven appeals. I am going to need another month or a month and a half, and will be asking for an extension to put together a comprehensive appeal,” he told Roar.

Tibbo and his clients, however, are concerned that if the haphazard screening process is anything to go by, the appeal may not be in their favour. “Looking at how [the] Immigration [Department] has behaved in this highly prejudicial manner, we’re concerned that the appeal board may do the same,” Tibbo said. “We’re worried that the government may just reject their appeals without allowing them to be heard, and will detain and try to remove them from the country,” he added.

The families fear that they will be forced to be separated from their children if the immigration department decides to detain them. The children will be sent to either government facilities or foster homes, while the adults will be sent to immigration detention centres, which Tibbo explains are essentially prisons, where they will possibly be held indefinitely or removed from the country. “They will only be able to see, and be reunited with their children, on the airplane back home,” he said.

Returning home, however, is not an option. Tibbo highlights how all four adults had fled varying levels of persecution and torture in their respective countries—and that returning home would only endanger their lives once again.

“Pushpakumara was caught by the military for desertion in 2012. There were no legal proceedings, he was never given a lawyer or brought before a military tribunal. The military took him to a special facility and tortured him for 10 days, to the point where he almost lost his life,” said Tibbo. He added that he was certain that once Pushpakumara returns to Sri Lanka, he will be detained, questioned, and handed over to the military. Tibbo fears that Pushpakumara, too, will join the ranks of Sri Lanka’s disappeared.

The picture is just as bleak for Kellapatha, who escaped political persecution, and for Nonis and Rodel, who escaped gender persecution. In Nonis’s case, Tibbo explains, she was “being exploited by some powerful people in Sri Lanka” and that the authorities were unable to provide her with the protection she needed. Rodel, too, escaped from her captors in the Philippines where she was “trafficked, and in a position of servitude.”

Despite being hard up themselves, it was the open-heartedness of the asylum seekers that ensured Snowden’s safety once the leaks went public. Ever since their role in sheltering him was exposed in Oliver Stone’s movie Snowden, Snowden himself has been campaigning for a more humane treatment of the families. In a video uploaded recently on the website, For The Refugees, Snowden explains the importance of understanding who the asylum seekers are—as people. “These are good people driven from their homes by torture, rape, abuse, blackmail and more, and in circumstances that are really difficult for us to imagine. These are documented, these aren’t allegations, these are facts,” he states.

Addressing their rejected claims for asylum, he goes on to say that although it isn’t clear who is behind it, it would appear that someone within the Hong Kong government wants to repatriate these families, despite the consequences. “…if the Minister of Security in Hong Kong, Lai Tung-kwok, allows it to happen, it should be seen as the defining moment of his career. Maybe we’re wrong, and he will… work to get these families immediately resettled and protected, whether in Hong Kong, Canada or somewhere else. But hope is not enough, and with stakes so high we can’t take chances.”

Meanwhile, a spokesman for Hong Kong’s security bureau, speaking to the South China Morning Post, denied that the Immigration Department targets any claimants, and added that the Department would continue to expedite the almost 9,000 pending asylum claims. He further stated that they would only accept claims that have “substantial grounds for believing that the claimant would be in danger of being subjected to torture or such other risks as cruel, inhuman or degrading treatment or punishment” in their country of origin.

Hong Kong has a near negligible rate of acceptance for refugees in general—the figure stands  dismally at 0.7% and below, a fact that Tibbo and his clients are only too aware of. Their only hope lies in an appeal or in the high court, says Tibbo. “The Hong Kong government has signed legal agreements and has a constitution, but it pays superficial notice to both constitutional and international legal obligations when it comes to asylum seekers and refugees,” he said.

As Lakshan Dias, leading refugee lawyer and chairperson of Transparency International’s Sri Lankan Chapter explains, legally speaking, the asylum seekers are well within their rights to have left their countries. “There is nothing called leaving your country illegally if your government fails to look after you. If it fails to guarantee your security, or  treat you as a first class citizen, and if you are under persecution and have well-founded fears of persecution, you are internationally and legally entitled to go and seek asylum in any other country in the world,” he said.

Where Sri Lanka is concerned, however, Dias cautions that although it may not have been  illegal for them to leave the country due to persecution, the powers that be at home may not share that sentiment. “The Sri Lankan hegemony considers them to be traitors. Although the current government may not feel that way, there are still the security forces and various state departments that are part of this mindset. So once they return, the security forces like the CID, TID, and the police may harass them, treat them like traitors and arrest, detain, investigate or interrogate them,” he said.

Vanessa and Ajith stand before a poster of Oliver Stone’s movie Snowden, with cut outs of Joseph Gordon-Levitt, who acted as Snowden, in their hands. This movie, incidentally, pushed the asylum seekers into the limelight when it was released last year. Image courtesy rt.com

Responding to Roar, the Sri Lankan government asserted that no requests had been made to any party seeking the return of these asylum seekers. “[They] obviously went to a certain country to seek asylum. It is that particular country that decides whether the asylum claims should be granted or not,” said Mahishini Colonne, spokesperson for the Ministry of Foreign Affairs.

For the asylum seekers, Hong Kong’s decision is crushing. In an interview with the South China Morning Post, Kellapatha said: “We are now in fear. We can’t sleep at night. We don’t know what might happen to us tomorrow.”

Until Hong Kong accepts their appeal, or the Canadian government comes to their rescue and grants them asylum, their fates hang in the balance.