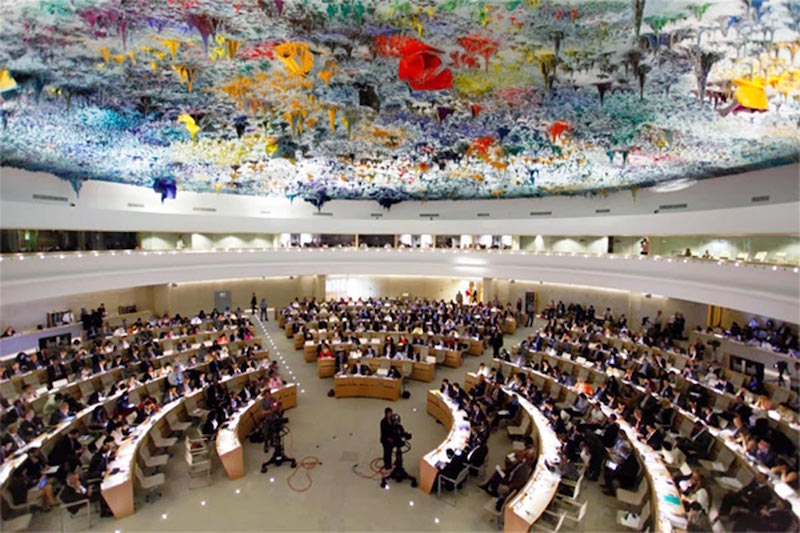 In his oral update, Zeid Ra’ad Al Hussein, the United Nations High Commissioner for Human Rights, commended the Sri Lankan Government’s progress on addressing reconciliation issues. However, he raised  concerns about the slow progress, chiefly that of  the participation of international judges and lawyers in a judicial mechanism,  which the Sri Lankan Government had explicitly ruled out.

Meanwhile a report by Verité Research, a think-tank and leader in the provision of information and analysis, has found that Sri Lanka has made “poor progress in overall implementation of the recommendations contained in the OHCHR report”. The Verité Research report, which will be released to the public next week, states that out of the three commitments in the Resolution 30/1, Sri Lanka has made progress on only two, which is ‘Continued engagement between the government and the OHCHR’ and ‘Cooperation between the government and special procedure mandate holders.’

For a better understanding of where Sri Lanka currently stands, Roar will intersperse the findings of Verité Research with the oral report by the United Nations High Commissioner.

Although Sri Lanka has been praised for making some progress, the country still has a long road ahead in tackling post-war reconciliation and transitional justice. Image credit: aljazeera.com/Steve Chao

In the Commissioner’s report, Al Hussein has stated that although the government had created a political environment conducive to reforms, “full promise of governance reform, transitional justice, and economic revival was yet to be delivered and risks stalling or dissipating.”

He added that power sharing within the coalition had become complex to the point that it was being manifested in the extensive cabinet where ministers had overlapping portfolios. This, in turn, gives mixed messages on issues such as accountability.

Referring to constitutional reforms, Al Hussein noted that the process presents an important opportunity to rectify structural deficiencies that contributed to human rights violations and abuses in the past, and ensure that these violations don’t recur. He also said that he hoped the political process will not include trade-offs and compromises on core issues.

The controversial ‘Sinha-le’ campaign that received a lot of attention some months ago was also brought up in the Hich Commissioner’s oral report. Image credit: designjuke.com

The High Commissioner also expressed concerns by continued aggressive campaigns in social media (such as the “Sinha-le” bumper sticker campaign) that incite nationalism against ethnic, religious, and other minorities.  He referred to incidents targeting the Muslim community, evangelical Christian, and LGBT groups, adding that they continue to be recorded. He called on the Government to be more forthright in combating such discriminatory violence, through appropriate legislation to regulate hate speech and incitement to violence.

Release Of Lands In North And East

He also stated that the local government has also not moved fast enough with tangible measures that would help to build confidence among victims and minority communities.  During his visit to Sri Lanka, he was told of some of the complexities encountered in releasing lands and relocating structures built by the military, but was assured a new task force would complete the process by June. “Since then, little progress has been reported and officials seem to be struggling to secure cooperation from the military,” he said, adding that that the lack of transparency and information is feeding new levels of frustration and disenchantment. With reference to the release of lands, Verité Research stated that there was no publicly available information to suggest that security sector reforms have been initiated as pledged in Resolution 30/1.

The Problem(s) Of The PTA

The High Commissioner also called on the Government to soon find a formula to charge or release the remaining security-related detainees. He was referring to the fate of the remaining security detainees held under the Prevention of Terrorism Act (PTA), an issue which remains a major concern for the Tamil community. Al Hussein noted that as of March this year, there had been little change or releases.

The High Commissioner also found it troubling that the Government continued to rely on the PTA to make new arrests, despite its commitment to repeal the law.  According to the Verite report, the Government has made more than 40 new PTA arrests in 2015-16, including more than 25 in March-April 2016 during a security operation after the discovery of an explosives cache in Jaffna. Verité Research has noted that a public statement released by the Human Rights Commission on June 22, 2016, reinforced the need to repeal the PTA and outlined international human rights standards and policies to which national security laws must adhere.

His report states that a major constraint remains the lack of a viable system for the protection of victims and witnesses. The Government adopted a pending law in February 2015, but this legislation has shortcomings that the High Commissioner has highlighted in previous reports. “The Government committed in Resolution 30/1 to further review the law, although this has yet to occur. Meanwhile, a Victim and Witness Protection Authority has been appointed under the law since January 2016, although it has suffered from the departure of its first chairperson and the deployment of his replacement on another assignment overseas.

The High Commissioner also strongly urges the Government to review and amend the Assistance to and Protection of Victims of Crime and Witnesses Act of 2015, in order to incorporate better safeguard for the independence and effectiveness of the victim, and witness protection program in line with international standards.

A dedicated Office of Missing Persons is among the post-war requirements Sri Lanka has failed to implement till now. Image credit: AFP/Lakruwan Wanniarachchi

“Progress has been hampered by a lack of clarity of responsibilities between various overlapping ministries and institutions,” Al Hussein’s report stated, adding that the lack of an overall, comprehensive transitional justice strategy raises questions about how the different transitional justice mechanisms will link together.

He also added that the Government had commissioned different consultants and experts, working in various capacities,  to design different models for the transitional justice mechanisms, with little coordination or transparency on the process. He added that there needs to better public participatory dimensions of the process.

Al Hussein observed that a key question remains the participation of international judges, prosecutors, investigators, and lawyers in a judicial mechanism. In May this year, while addressing a large group of senior military officers, the Prime Minister was reported to have again ruled out international participation in a domestic Sri Lankan justice mechanism. The High Commissioner remains convinced that international participation in the accountability mechanisms would be a necessary guarantee for the independence and impartiality of the process in the eyes of victims, as Sri Lanka’s judicial institutions currently lack the credibility needed to gain their trust.

How Did Other Countries Respond?

Russia offered its support to Sri Lanka by telling the international community that Sri Lanka should be allowed to address its domestic affairs without external interference.

The United States said it will await the next update on Sri Lanka at the UNHRC in March next year, but would encourage the government in the interim to make tangible steps in fulfilling their commitment.

Britain was skeptical, noting that Sri Lanka still has a long way to go. They called on the Government to repeal the PTA and deliver on its commitment to devolve political authority through constitutional reforms, and to put in place a credible transitional justice mechanism.

Canada noted Sri Lanka’s progress and encouraged the Government to take an inclusive and coordinated approach to the reforms “to ensure the fulfillment of all of the commitments agreed to in the resolution, especially on the reconciliation and accountability processes.”

Macedonia cited that they were aware the process of accountability and reconciliation requires time but should not be prolonged indefinitely.

Norway acknowledged the progress but said that Sri Lanka should continue this process of reconciliation based on inclusive consultations with victims, civil society, and the general population.

The United Nations Human Rights Council has had its say. What next for Sri Lanka? Will the country accelerate its judicial process to assess these allegations of war crimes, or will the government have to go back on its word and renew old pledges?