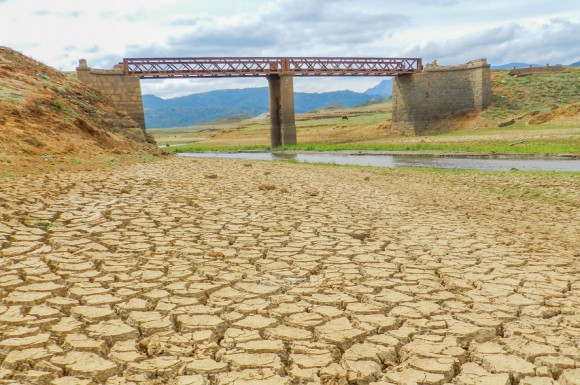 In the past month alone, Sri Lanka has battled through a cyclone, heavy monsoon rains, landslides, and some of the worst floods to hit the island in 14 years, leaving around 213 people dead and about 600,000 displaced. So it may come as a surprise to many that the country is currently experiencing the worst drought since 2001. This is not a recent development, as parts of the island have had little to no rainfall and have been under severe drought conditions since the beginning of 2016.

Aerial view of the Samanala dam area during the drought last year. Some parts of the reservoir had dried out completely – the brown patches visible here are normally under water. Image credit: Roar/Christian Hutter

According to the Disaster Management Centre (DMC) of Sri Lanka, 11 districts across the Northern, Eastern, North Western and North Central provinces are experiencing drought. These districts, which fall within the island’s dry zone, include Trincomalee, Ampara, Batticaloa, Jaffna, Mullaitivu, Kilinochchi, Vavuniya, Mannar, Kurunegala, Puttalam, and Anuradhapura. Since these regions were unaffected by the south-west monsoon, the torrential rains did nothing to alleviate the situation.

The Northern Province is the hardest hit, with over 450,000 people from 130,931 families affected. The DMC’s estimates show that a staggering total of around 850,000 people from 243,683 families in all four provinces are facing the adverse effects of drought, which include a severe shortage of food and water. These numbers are far worse than the last major drought in 2001, which affected over 300,000 people and resulted in more than 110,000 hectares of agricultural loss. To further compound matters, the Department of Meteorology confirmed that the Northern districts are not likely to have any rainfall for the next few months.

Climate change is believed to be the trigger behind the shift in weather patterns, which is causing the current severe conditions. The average global temperature for January – April 2017 was recorded by the U.S. National Centers for Environmental Information to be 0.95 degrees Celsius above the 20th century average of 13.7 degrees Celsius. This year’s global temperatures from January to April were the second highest temperatures recorded for these months since 1880.

A shortage of water for irrigation has had an adverse impact on the country’s harvests. Image credit: Gwenael Piaser

One of the biggest impacts of 2017’s drought has been the shortage of water, both for drinking purposes and agriculture. As a result of a lack of rainfall and shortage of water for irrigation, only about 35% (281,910 hectares of Sri Lanka’s total 804,838 hectares) of paddy lands were cultivated in November 2016, making it the lowest cultivation in 30 years. In addition, thousands of hectares of cultivation were destroyed by dry weather during the Maha season (September 2016 – March 2017), bringing March 2017’s rice harvest down by around 63% as predicted by the World Food Programme. Since paddy cultivation is the main means of income for an estimated 1.8 million households across the island, this has been especially devastating for Sri Lanka’s rural farming communities, which are now struggling under the double constraints of hunger and debt. According to the IRIN, a news agency which monitors humanitarian crises, 80,000 people in drought-affected areas may be in dire need of life-saving support. Also, in March this year, the UNICEF estimated that 365,232 children across the island faced food and water shortages.

As paddy is the country’s staple crop and the government has maintained self-sufficiency in the production and consumption of rice thus far, its shortage will definitely be felt all around the island. Rice, however, is not the only crop that is at risk. The decline in all harvests has affected the nation’s food supply, resulting in an increase in food prices, further compromising the food security of the poor. Only 44% of the lands allocated for other crops were cultivated last November, and the cultivation of cowpea, red onion, and potato was estimated to be below 20%. The country is expected to rely on food imports to prevent shortages in the coming months. Sri Lanka’s continued drought and changing weather patterns are also said to be causing a current shortfall in coconut production. Coconut, which is one of the country’s major export commodities, is cultivated largely in Puttalam and Kurunegala. Given that both these regions are drought-prone, this could affect future exports of coconut and coconut-based products.

Since Sri Lanka’s main energy resource is hydropower, low water levels in the reservoirs are compromising hydroelectricity generation, leading to an increase in the use of thermal power to produce electricity. The import of fuel for this purpose further adds to the economic burden that the drought is imposing on the country. It is believed that Sri Lanka’s economic growth rate this year will be significantly lower than predicted, due to drought. As agriculture amounts to 8% of the country’s GDP, losses in this department will also set the country back significantly. The agricultural sector is not expected to recover this year, even if there is more rainfall in the coming months.

Land degradation is another problem that Sri Lanka faces because of the drought. When the plant cover on the earth’s surface dies due to dehydration, the land is exposed to erosion by wind and water. This leads to the loss of topsoil, reducing soil fertility drastically. Loss of soil moisture can also make it difficult for soil affected by drought to take up water, resulting in a decrease in groundwater. All these effects can irreparably damage cultivable land.

Food and water aid has been accepted from India, Pakistan, Indonesia, and Thailand to combat shortages, and import taxes on rice have been reduced. The government has said that it will provide Rs. 10,000 per acre of destroyed farmland every month to all the farming households affected by drought. Additionally, Rs. 50 million has been allocated by the Ministry of Finance to provide drinking water to the affected areas. The DMC said that they are in the process of distributing drinking water to over 24,000 families in the Northern, Eastern, and North Western Provinces. Moreover, the Department of Irrigation in Jaffna informed Roar that they are currently delivering safe water from Thondamanaru and Manalkadu via pipelines to homes in Jaffna town, Nallur, Kodikamam, Karaveddy, Kaithady, Chavakachcheri, Navatkuli, Kopay, Atchuvely, Sandilipay, and Chankanai. They added that other areas in Jaffna are also receiving drinking water through communal pipelines.

According to the Department of Irrigation, the water levels in the reservoirs have not increased by much, despite the brief period of heavy rain. Director General of Irrigation, M. Thuraisingham, informed Roar that this was because areas like the North, East, and North Central Provinces received almost no rainfall at all, even though other areas of the country experienced heavy rain. He affirmed, however, that there is sufficient water for cultivation in the Eastern Province. “There is about 30% water in the reservoirs,” he said, adding that the Yala cultivation (May – August 2017) will be planned based on the availability of water. For a successful crop during the 2017 Yala season, the carryover capacity of the reservoirs should have exceeded 50% of their total capacity. Based on the current water levels, only 50% of the paddy land can be cultivated during this year’s Yala season. “There is a drought, but our department is working hard to safeguard the crops,” Thuraisingham declared.

Despite the fact that Sri Lanka’s greenhouse gas emissions are among the lowest in the world, the island is extremely vulnerable to climate change. Currently, Sri Lanka is simultaneously dealing with two large-scale disasters as a result of global warming and shifting climates—the aftermath of severe flooding in some parts of the country and the ongoing, prolonged drought in other parts. Mitigating these problems and their underlying cause is not simple, as it requires both global and nationwide strategies. Combating climate change is the only way these natural disasters can be prevented in the long run, but this has to be a global effort that includes the ubiquitous participation of all the major polluters in the world, an undertaking that could prove difficult after the U.S.’ withdrawal from the Paris climate accord last month.

Apart from fighting the good fight against global warming, the only viable option open to us is to try and minimise the effects of these disasters by being prepared and sufficiently equipped for any eventuality. This includes educating farmers and government officials on climate change and sustainable farming methods, issuing early warnings to those at risk, and ensuring that effective measures for disaster management, rescue, and relief are in place. As we mark the 22nd World Day to Combat Desertification and Drought today, we must collectively begin work towards strengthening our resistance against these natural disasters, and preserving our arable lands and forests for posterity.