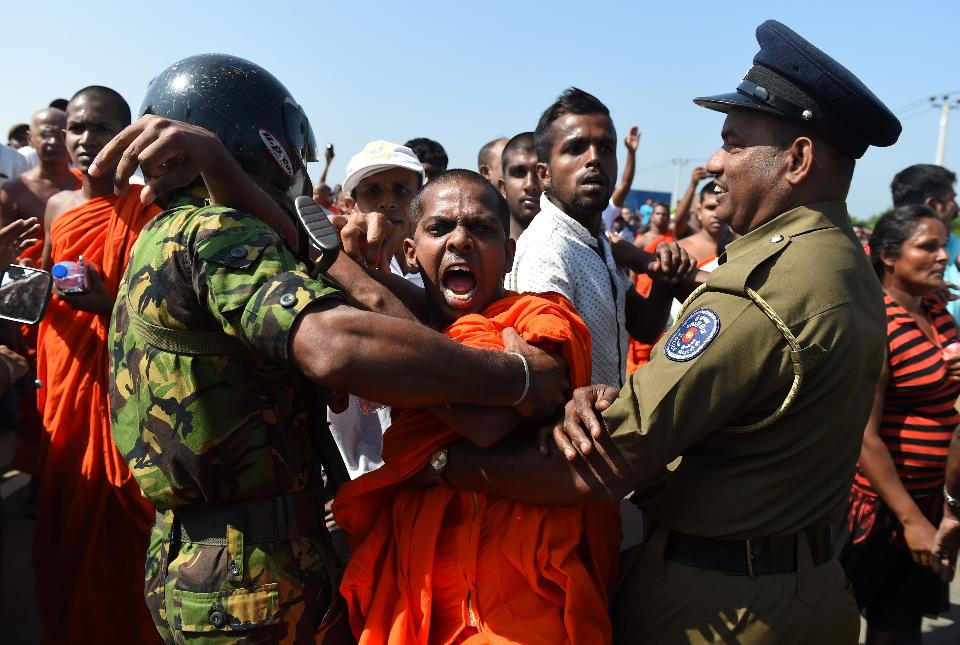 The Story Behind The Hambantota Clashes

Hambantota just cannot catch a break. Not for the first time in less than a month, clashes in Hambantota have been making headlines.

By now, the Mirijjawila clash during the inauguration ceremony of the Sri Lanka-China Logistics and Industry Zone Development Project is probably one of the biggest news stories of the month ‒ and that, too, less than two weeks into the New Year.

But what exactly was the issue?

It all begins with the second phase of the Yahapalana Government’s Economic plan, which was ceremoniously unveiled last Thursday (January 5) by Prime Minister Ranil Wickremesinghe.

At the event, the Premier announced that government would be implementing the second phase of its economic plan, now that the country’s biggest problems had been resolved (according to the government, that is) last year. He claimed that the soaring national debt and the low national revenue were successfully addressed by the government last year, and accordingly, this year will focus on development.

Wickremesinghe also revealed that the government plans to focus on exploiting the country’s strategic positioning in order to create a communications and logistics hub in the South Asian region. In the light of this, the government plans to develop Colombo, Hambantota, and Trincomalee, all the while focusing on the South-Western as well as the North-Eastern monsoon corridors too.

Furthermore, the Prime Minister explained that the second phase will witness more measures being implemented to develop an export-oriented economy that will create jobs for the local workforce. He said revenue estimates included between US$ 2 to 3 billion flowing in by way of foreign investments from Asian countries such as China, Japan, India, and Singapore. The country is expected to forge closer relationships with Pakistan, Bangladesh and ASEAN countries.

The Sri Lanka-China Logistics and Industrial Zone is a(nother) development project spearheaded by the Sri Lankan government and majorly funded by the Chinese government. The project is expected to centre on the Magampura Harbour in Hambantota, and aims to transform Sri Lanka into an ‘economic hub’ in the South Asian region, in the hopes of creating employment opportunities.

The investment in the project is expected to generate USD 5 billion within three years. According to media reports, over 55 foreign investors have already commenced discussions with the government regarding potential investments.

The entire plan has, however, come under severe criticism from the Joint Opposition and its supporters, particularly after the government’s announcement that 1,235 acres of land have been allocated on a 99-year lease for the construction of the zone.

As of now, only the framework agreement of the Hambantota harbour Public Private Partnership with the China Merchants Holdings (International) Company Ltd. has been signed. According to the government, the land lease agreement and the final concessionary agreements which are yet to be signed will take place within this month.

The members of the Joint Opposition, together with former president Mahinda Rajapaksa, have stood firmly against this particular government project. On numerous occasions, they have accused the government of ‘selling off the Hambantota land to foreign investors’.

The Joint Opposition has also claimed that there are many discrepancies in the project, from a failure to notify the Observation Working Committee for Accountability, to the Ports Authority’s opposition to the said project.

Former President Mahinda Rajapaksa, issuing a statement yesterday (Tuesday 10), said, “the disruption caused to the people of the area will be immense if 15,000 acres of land were to be acquired for an economic zone.”

He added that, “In a situation where even the 2,000 hectares within the free port have not been utilised yet, on what grounds can we justify the leasing of another 15,000 acres to a foreign company?.”

“My government agreed only to the use of LNG gas, even though some potential investors wanted to use coal. This is not an issue that can be resolved by baton-charging or tear-gassing protesters or having them assaulted by thugs and remanded. There are real issues relating to the financial benefits that will accrue to the country from this deal, and issues of control and sovereignty over the free port and possible environmental issues that need to be addressed,” he said.

The Janatha Vimukthi Peramuna (JVP) has criticised this particular government project, alleging financial misappropriation. According to Chief Opposition Whip and JVP leader Anura Kumara Dissanayake, the former government looted from the construction of the Hambantota harbour, while the current administration is looting from the sale of the said harbour.

Premier Wickremesinghe with the Chinese Ambassador at the inauguration ceremony. Image credits: dailynews.lk

However, the government has stood firmly against these accusations claiming that it is not selling lands from Hambantota to the Chinese investors, but is only leasing the land over a period of 99 years.

Unrest At The Inauguration Ceremony

On the eve of the inauguration ceremony of the Sri Lanka-China Logistics and Industry Zone development project, the Hambantota Magistrate Court issued a restraining order against 27 groups from engaging in any kind of public meeting, demonstration or protest in or near the harbour premises and the surrounding area.

Despite the court order, members of the Joint Opposition and several other supporting groups commenced a supposedly peaceful Satyakriya procession that commenced from Ambalantota and ended in Mirijjawila.

Due to the police barricades on the main roads, the groups had taken alternative routes to arrive in Mirijjawila, where they were met by the Police Special Task Force and the Riot Squad. This is when things turned sour.

The oncoming protesters were ordered to be dispersed by the Inspector General of Police, Pujith Jayasundara, who arrived at the scene later (and was also reportedly hit by one of the jet streams from the high-pressure water cannons). Acting upon orders, the riot squad and the Police STF began to shoot tear gas at the crowds, which was later followed by water cannons.

The protesters dispersing under the jet streams of the Police water cannons. Image credits: asiancorrespondent.com

The crowd that dispersed in the initial intervention returned to the barricades and proceeded to throw rocks at the police. Several individuals who were seen on the side of the police returned the assault by throwing rocks at the protestors. There were also a number of one-on-one clashes. This prompted the Police to deploy the riot squad to disperse the crowd with the use of batons. In the police onslaught, the dispersing crowds continued to throw stones.

Protests were reported from the Ambalantota, Sooriyawewa, and Hungama areas as well.

In the aftermath, 52 protesters were arrested by the Hambantota Police. Twenty-three individuals, including monks, police officers, and journalists, sustained minor injuries in the fracas. Ten private and four Hambantota Police vehicles sustained damages in the melee.

The inauguration ceremony itself was however not disturbed by the incidents, and carried on without a fuss.

By Sunday, the number of arrested individuals had gone up to 41, with all of them being remanded until later.