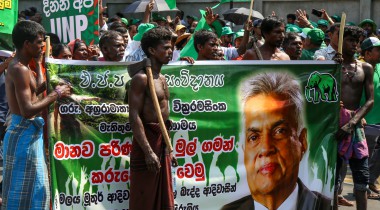 The Farce That Is The May Day

Ninety years ago today when pioneering trade unionist Alexander Ekanayake Gunasinha led a group of men and women in what was Ceylon’s first ever May Day march, he would hardly have foreseen the shift in priority and the eventual capitalist hijacking of the International Labour Day celebrations by mainstream political parties in the island nation. The country’s first May Day rally proper held in 1932 held at the Galle Face Green, again led by Gunasinha, saw men clad in white sarongs and red striped banians and women in blood red reddai-hatte (cloth and jacket) singing and dancing to the songs of the proletariat, in a decidedly non-politicised display of strength and solidarity.

Fast forward a few decades, and the one day of the year dedicated to the hard working labour force of this country has turned into a festival of political muscle flexing for the ruling elite, with nay a banner in sight supporting the cause of the working man, let alone a chorus of Sa Dukin Pelena Un. Parties spend millions, with their district organisers transporting party supporters from their respective constituents by the busload, often bribing them with a bath packet and some booze, to shout slogans supporting the leadership and denouncing their rivals, making a mockery of the Labour Day’s significance.

Of course, this gross politicisation of the labour day is nothing new. For years, mainstream parties have been using their May Day rallies as a platform to showcase their supposed grassroots reach, with rallies attended by thousands of party supporters from all over the country. And it’s showing no sign of changing. More than half the Sri Lanka Transport Board (SLTB) fleet of busses have reportedly been booked for May Day rallies this year, with the Sunday Times reporting that the SLFP has booked some 1,832 buses, while the UNP has borrowed 1,432, to transport party cadre for their rallies in Kandy and Campbell Park respectively, totalling 3,949 buses. The significance of the day has, clearly, been effectively overshadowed by a political mating dance that is as tacky as it is wasteful.

Roar spoke to Social Scientists’ Association (SSA) researcher and co-editor of Pathways of the Left in Sri Lanka B. Skanthakumar to determine the reasons that has led to this status quo.

It isn’t surprising that workers’ issues don’t figure in the May Day rallies of the main political parties in Sri Lanka, says Skanthakumar, for at least two reasons: the capitalist nature of the two main parties, and the lack of a strong trade union movement.

The United National Party (UNP) and the Sri Lanka Freedom Party (SLFP), he points out, are not social democratic parties birthed by, or became linked to, the traditional workers’ movement as was the case in Europe, but rather founded by the landed rich. While their electoral support may draw from diverse social classes, he says, these parties are consistently supportive of capitalism as evidenced by their policies and their convergence over time.

From the UNP’s May Day rally today at Borella. Despite the mandatory annual rallies, the true spirit of May Day has been eclipsed by the capitalist nature of Sri Lanka’s main political parties. Image credit: Roar/Nazly Ahmed

“Whatever their rhetoric or half-hearted reforms over the decades, neither aspires to fundamentally restructure the economic, social and political order which preserves, reinforces and reproduces the relations of exploitation and oppression experienced by the working class, that is those who live by the sale of their labour-power. Instead, they offer welfare and handouts so as to reap the fruits of political patronage instead of reforms that would loosen the authority and power of the political elite,” Skanthakumar told Roar.

The existing trade union movement, vocal though it may be in some fronts, has been slowly but surely on the way out. Needless to say, without a solid union presence agitating for workers’ rights, the main political parties would have no incentive to speak to the everyday issues of workers in their place of employment, in the communities in which they live, and in the policies of the state. Skanthakumar attributes this to what he calls an erosion in working class consciousness fueled by neoliberal ideology.

“The unions are in decline numerically as well as in their capacity to organise and mobilise workers; union density (number of workers organised in unions) is in decline; there is an erosion in working class consciousness for a variety of reasons including neoliberal ideology; while the unions affiliated to the main parties believe they should be supportive of their parties in government instead of representing the best interests of their members,” he says.

These are hardly the conditions which are supportive of bringing workers as a class and their collective concerns front and centre within the political sphere, Skanthakumar goes on to say, citing it as the reason why no mainstream politician will take up the issue of precarious work and the right to secure employment and statutory protections; nor the issue of legislation for equal pay for work of equal value; nor the union-busting that denies workers in the free trade zones and elsewhere the right to form and join a trade union; nor the implementation of the National Workers’ Charter. According to Skanthakumar, it’s an accident of history that the UNP and SLFP have May Day events at all. It’s a reminder of how the Left which hegemonised the workers movement for a period, was once seen as a political threat, he says, adding that it was important for the UNP and SLFP to assert themselves in the trade unions and to claim the allegiance of at least a section of the working class, because they claimed to be national parties that represented all of the main social groups in society

“Evidently, the May Day has been hijacked by these parties to flex their muscle in a beauty contest over who can draw the bigger crowds, who has the most colourful parades, and who can entertain the masses in their rallies. The crowds whom they transport with various inducements, and those who may come of their own will are not the classic working class but will include many who are public employees or are self-employed or employ others. The traditional working class for whom May Day is a holiday will mark it as a day of leisure or family time; while for the new feminised working class for whom there are no paid holidays, it will be another day to eke their living,” he says.