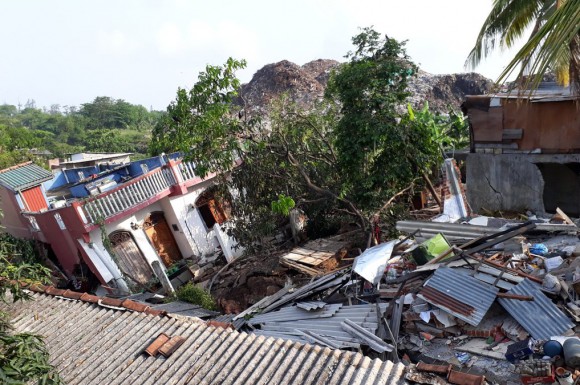 The Science Behind The Meethotamulla Disaster

Despite all the updates, backstories, and analyses, there is still no clear understanding of what happened in Meethotamulla on April 14. Was it an explosion, a landslide, or an avalanche of garbage? The witness accounts multiply and contradict, with little overlap. The media has conjectured the event to have been caused by a methane explosion, and many residents reported of a corresponding noise. However, Director of Landslide Research and Risk Management Division of the National Building Research Organisation (NBRO), R.M.S. Bandara, told Roar that there had not been any methane explosion.

“For a methane explosion to happen, it should be trapped under the soil,” said Bandara. “However, when you look at the history of this situation, the people complained of their houses getting cracked. If those cracks opened up [in the soil], there won’t be any trapped methane gas.”

Having ruled out an explosion, the NBRO has analysed the layout of the disaster and realised that it wasn’t a garbage-avalanche. There were more houses blanketed by soil than by garbage. What they were looking at had been an unprecedented phenomenon: a lateral landslide caused by a garbage mountain.

Underneath the garbage dump, there are soil-layers of varying strength and character. At the bottom is a dense, firm layer; right under the surface is a layer of peat. A product of decomposing organic matter, peat is a common feature of marshland. This is not a surprising finding, since buried under both the garbage and the houses is the historic Pothuvila farm. Peat also happens to be a loose, mutable substance, and prone to movement. Squeezed between the weight of the garbage dump and hard underground soil, the peat layer had slid away along the path of least resistance, carrying with it scores of houses and a large section of the garbage mountain.

“Even for [the peat layer] to move, there wasn’t much space. Because on the other side is a laterite hill, there was a limit to the movement,” explained Bandara. “This caused the peat layer to [collide with the hill and] heave. This made the houses to be tossed up and the earth to open up like a flower… this is what we called lateral movement with a vertical uplift.”

The houses that were tossed had landed on other houses, and extended the reach of the disaster.

Land Unsuitable To Build On?

By now the media has settled the Meethotamulla residents’ entitlements, to both land and victimhood. It is no longer a question of whether it is the garbage dump or the people who should have been removed. However, given that the Pothuvil farm was unreliable terrain, a concern arises as to whether it was suitable for development projects such as Dahampura and Pansalhena. Regardless of the garbage dump, was the landslide an inevitability?

Both the Pansalhena and Dahampura projects were overseen by the National Housing Development Authority (NHDA). The former had been assigned to the NHDA in 1976 by its predecessor, the Department of National Housing, while the latter had been assigned to it in 1986 under the Gam Udawa programme. However, according to what Roar learned from the Office of the District Manager, the NHDA’s role had been limited to issuing the residents with legal title. The construction of the houses themselves had been private initiatives.

According to residents, the government had rendered the Pothuvila farm a flatland forty years ago by sealing it with yet an older layer of garbage. When asked whether the suitability of the land was tested for residential construction, the Office of the District Manager told Roar that it has not received any complaints from the residents about sinking houses.

Although the NBRO’s Bandara admitted that there is a probability of houses sinking if they are built on marshland, he said that mere houses could not have caused a rupture of the magnitude that happened on April 14.

“We don’t know if the land was tested or not before the houses were built,” said Bandara. “They may not have carried out extensive studies of the area because they were only building normal houses.”

Bandara further stated that the mere existence of marshland does not necessarily render a land unsuitable for residential construction.

“You can build,” said Bandara, “after examining the situation of the soil, you can apply an appropriate foundation and build on top. Engineers know this. Depending on the nature of the construction and the bearing capacity of the soil, they will recommend a certain type of foundation.”

Was The Garbage Dump Illegal?

In the exchange of blame that ensued the disaster, it was often questioned whether the garbage dump was outright illegal. In 2009, residents of Colombo filed a Fundamental Rights case in the Supreme Court (case number 218/2009 SCFR), alleging that Burns Trading, the private company contracted by the Colombo Municipal Council (CMC), was not properly regulating the garbage dump at Bloemendhal, Colombo 13. The court determined that further garbage dumping at the site would cease. As a temporary solution, then Chief Justice Sarath N. De Silva issued an interim order for the dumping to be redirected to Meethotamulla, Kolonnawa. Eight years since, that interim order remains the only legal authority for the Meethotamulla garbage mountain.

Nuwan Bopage, the Organiser of the People’s Movement against the Meethotamulla Kolonnawa Garbage Dump (PMMKGD), told Roar that the dumping was never procedurally legitimate.

Bopage told Roar of the repeated protests of the PMMKGD, the facile promises they won, and the compromises they incurred. In December 2011, the Chairman of the Municipal Council provided them an interview; in March 2013, then Secretary to the Ministry of Defence, Gotabhaya Rajapaksa, promised them a final solution; in 2015, Prime Minister Ranil Wickremesinghe called them for a discussion with the Urban Development Authority. The list is a chronicle of futility.

“All they did was to manage the situation politically,” said Bopage. “In 2015 they water cannoned our march for no reason. Then they attacked us using thugs, in December 2015. It was a well-coordinated attack. In the night, the police who were stationed at our protest suddenly withdrew. Then a group of thugs appeared. In the end it was us, the victims, who were arrested by the police.”

In 2013, the PMMKGD filed a case in the Magistrate’s Court, citing the garbage dump as a public nuisance and praying for its removal. However, the Magistrate’s Court had dismissed the case, reasoning that it could not question the interim order of the Supreme Court. In 2015, the PMMKGD filed two applications in the Supreme Court (case numbers SCFR 311/2015 and SCFR 318/2015), seeking relief for the infringement of their Fundamental Right to equal treatment before the law. Owing to delays both political as well as those inherent in the justice administration system, neither case has yet been argued in court.

A protest by the PMMKGD. Protesters hold placards that read ‘We suffered for 10 years, enough is enough ’ and ‘we don’t want temporary plasters for solutions’. Image courtesy thinakaran

According to Section 131 of the Municipal Councils Ordinance, the CMC has the authority to designate any place convenient for the disposal of garbage. However, the same law also binds the CMC to do the following:

“to take all such measures and precautions as may be necessary to ensure that no such refuse, night-soil, or similar matter removed in accordance with the provisions of this Part is disposed of in such a way as to cause a nuisance.”

Section 120 of the Urban Councils Ordinance mirrors the above duty, word to word. Clearly, the garbage mountain was an accrual of negligence – whether it be by the CMC or the Kolonnawa Urban Council.

“They evacuated about 300 homes before and wanted us to leave, too,” said Bopage, “but not on the grounds of public safety. The letters they sent us asking us to vacate told us that the reason was to expand the garbage dump. Not because our lives were at risk.”

The Future Of Meethotamulla

NBRO’s Bandara emphasised that the garbage mountain posed a continuing threat to the residents of Meethotamulla, especially in view of the impending rains.

“If more garbage is loaded onto the mountain, or if the rains fall and increase the weight of the garbage,” warned Bandara, “the landslide movement could happen again. Considering that risk, we have marked a zone as restricted. The people in that zone must be evacuated. The weight of the garbage mountain must also be immediately reduced. We created alternative drainage systems because the existing ones do not work, and all the water from the surrounding hills come down to collect in the affected area.”

Correcting a popular misconception, Bandara explained that the tarpaulin used at the site was not a mere cosmetic solution to conceal the garbage, but an essential measure to strengthen the periphery of the landslide and prevent further movement.

“The tarpaulin used by the military is to give protection to the toe of the landslide. They constructed a bank around the landslide. It is in order to prevent the rains eroding the bank that they used the tarpaulin.”

When asked about the vulnerability of other garbage mountains in the country, Bandara said that the Meethotamulla disaster had set a new standard in safety concerns. He implored both public authorities and the general public to obtain a detailed report of the bearing capacity of any soil before loading it with artificial weight.

“Until now we had not studied garbage mountains as causes for landslides,” he said. “But now a new field of research has opened up. When we look at the garbage dump sites [in Sri Lanka], even though it is said that they are uninhabited, there are people living there. For now, we have started studies on the garbage dump sites at Guhagoda [Kandy] and Kegalle.”

The District Manager’s Office of the NHDA told Roar that residents of Dahampura and Pansalhena who have obtained housing loans from the NHDA have been released from paying them back. Meanwhile, Minister of Megapolis and Western Development, Patali Champika Ranawaka, issued a press release assuring the public that the Meethotamulla garbage mountain is at no risk of exploding. He also pledged that the garbage mountain would be rehabilitated within the next five months.

As far as the Meethotamulla residents are concerned, the vogue of sympathy and self-blame had come too late. In 2015, the PMMKGD had presented to court 30 death certificates of residents who have died of dengue and leptospirosis, as well as a report by the Government Medical Officers’ Association on the effects of the garbage mountain.

“I feel that our struggle was too childish,” said Bopage. “Maybe we should have been violent. S.M. Marikkar, the parliamentarian who is supposed to fight for us, went and gave a joint press conference with the thug who assaulted our marches, the very next day we were assaulted. In the end, we have lost the game.”

Neglected for decades, distanced from the rich, concealed from tourists, and shrugged off without compunction, the Meethotamulla garbage dump is emblematic of all of Sri Lanka’s maladies. Its cost is not fully represented by the death count, or even by the humiliation of an individual politician. There is an ominous imbalance in the tally, a delayed response maturing over generations. The unaccounted injury could be an entire nation becoming tired, not just of politicians, but of politics. What comes after politics is a terrifying question.