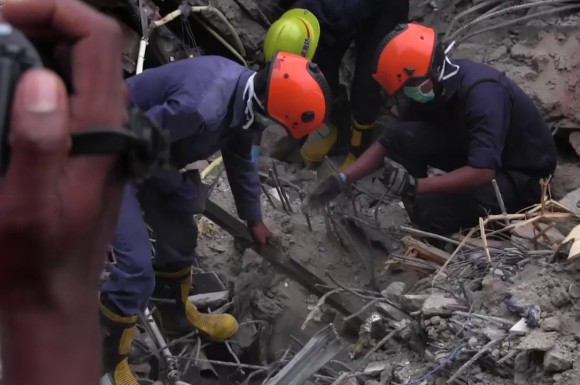 The Wellawatte Disaster: What Happened?

Wellawatte’s “The Excellency” renewed our shivers when  CCTV footage from the building’s disintegrating interiors started cropping up in the media. Barely a minute long, the video was a compilation of attitudes of helplessness. Ballrooms deflated, doors flew off, and clouds of dust erased corridors as victims made futile escapes. Search and rescue operations carried on for the next few days to prise out the 50 or so workers from the pile of rubble. As of now, the Disaster Management Centre puts the death count at three and the injured at 25. Minister of Megapolis and Western Development, Patali Champika Ranawaka, stated that the building had been illegally expanded from three stories to five, appropriating the bank of the adjacent canal—a margin of land on which construction is prohibited. On May 21, the owner of The Excellency was arrested. Probing among the muddle of errors, what was discovered was no spectacular bribe or root evil, but a story of widening margins of negligence.

What Caused The Collapse?

The National Building Research Organisation (NBRO) has not yet concluded its investigations. Speaking to Roar, the Director General of the NBRO, Dr. Asiri Karunawardena, said that it was very likely that the building would have displayed signs of deterioration for a long while.

“We don’t know if cracks appeared in the building,” said Karunawardena, “but it’s not normal for a building to collapse instantaneously like that.”

He said that a failure in the foundation laid on the canal bank could have set off a chain reaction that caused the disaster. The way the building stood, an instability of land, coupled with the unsupportable weight of the later constructions, would have been sufficient cause—even without the structural integrity of the building being compromised. However, Karunawardena said that the possibility of poor quality construction materials, too, has not been ruled out.

“It is illegal to build within 21 feet from the canal bank,” explained Karunawardena, “and that is exactly what these people have done.”

The Excellency had been expanded right to the edge of the canal. Image courtesy asianmirror.lk

The NBRO is also inspecting the surrounding buildings to see if their structural integrity has been affected by The Excellency’s collapse. Speaking to residents of the area, Roar learnt that the falling debris had also damaged the building next to The Excellency.

Just How Illegal Was The Excellency?

The Sri Lanka Army conducting search and rescue amid the rain and the rubble. Image courtesy army.lk

The Excellency did not circumvent the law outright. The Chairman of the Urban Development Authority (UDA), Jagath Munasinghe, told Roar that the owner had obtained approval in 2008 for what’s called a ‘mixed development’: a three-story complex, the lower floor open for shops, and the upper floors reserved for residencies.

“However, they had not built according to the original plan,” said Munasinghe. “The reception hall that they had been running was not even there in the plan. They had also built on the reserved land banking the canal.”

By the time The Excellency collapsed, it had expanded into five stories, with work on a sixth and seventh story already begun, and was popular as a reception hall. Reportedly, a wedding was even scheduled to be held last Thursday evening, the day of the collapse.

Ordinarily, a building permit for houses or shops can be obtained by the relevant local authority, such as the municipal council or the urban council, after submitting the necessary application and the building plan. Every alteration to an already approved building has to be separately approved.

However, from February 1, this year, the UDA has taken upon itself the role of issuing approval for a special class of buildings. If a building is one of the following, approval needs to be obtained from the UDA and not the local authority:

a)    A construction that is four stories or higher;

c)    A development that proposes to partition a land of 40 perches;

d)    Any construction that impacts the environment;

e)    Any construction in a UNESCO heritage site;

f)    Any construction on lands that the NBRO had declared as danger zones.

Munasinghe said that information on the procedure to be followed is laid out in the UDA website, where the development license is also available to download. The application process is due to be digitised from June 1. “Soon an applicant will be able to complete the form from home,” said Munasinghe, “and see the status of the application right until the end of the process.”

The Excellency is a specimen case of a more widespread disease. Compact Colombo bristles with structures illegal and half legal. According to Munasinghe, a sample survey carried out in Colombo South revealed that the areas of Bambalapitiya and Wellawatte alone have approximately 2,000 illegal buildings. Some of these can regain their legality by effecting minor adjustments, but others would need to be demolished. If singled out, the UDA would be giving the building owner a grace period of 14 days to comply with legal specifications.

“After the 14 days, we give the owner a further week to remove the illegal parts of a building,” said Munasinghe, “thereafter we will institute legal action against them in the Magistrate’s Court.”

On May 18, with racism fevering the war memorials and the monsoon bringing along the threat of floods, The Excellency’s collapse was a gratuitous tragedy. It was also a reminder that the white lies and small frauds, with which the average Sri Lankan rounds off his or her legitimacy, keep adding up.