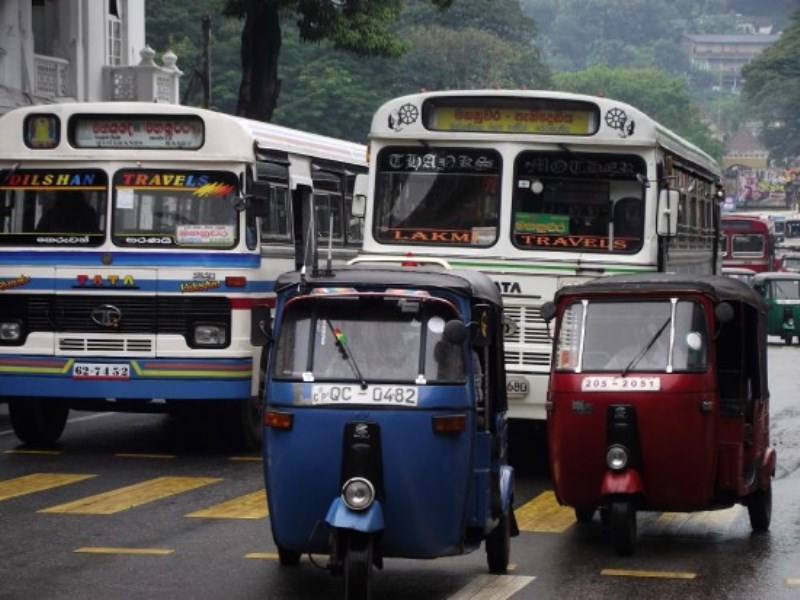 Commuters across the island were greatly inconvenienced last Friday (December 2) when the All Island Private Bus Owners Federations (AIPOBF), the Lanka Private Bus Owners Association (LPBOA) and other bus and three-wheeler associations launched an all island strike.

The strike was carried out in protest against a recent decision to increase the fine for seven traffic violations up to Rs. 25,000 ‒  a decision that upset vehicle owners, specifically bus associations and three-wheeler drivers’ unions, who claimed the increase in fines was unfair to them. The bus drivers’ associations were especially upset over the fact that the fine originally proposed during the 2017 Budget reading was Rs 2,500, not Rs. 25,000.

How Did The Fines Increase Tenfold?

Delivering the Budget statement on November 10, Finance Minister Ravi Karunanayake acknowledged that more lives are claimed due to road accidents every year. In an attempt to curb the number of accidents due to traffic violations, the Minister proposed to increase fines charged on traffic offences from the minimum fine of Rs. 500 to Rs. 2,500.

Following the budget reading, President of the LPBOA, Gemunu Wijeratne, threatened to launch a countrywide bus strike. He claimed that it was unfair to increase the fine and that it would adversely affect the bus industry as a whole. The LPBOA insisted that raising revenue through hurting the common man cannot be acceptable.

In the light of complaints from both the LPBOA and the AIPOBF, the government decided to hold talks with the unions and representatives to revise the proposal.

On November 21, representatives from several unions from the transport sector met with Minister Ravi Karunanayake and Minister of Transport, Nimal Siripala de Silva, to discuss this increase in fines.

Although the decision to increase the fine was unanimous, the AIPOBF and several three-wheeler drivers’ associations voiced their displeasure, which culminated in Friday’s strike.

SLTB buses were attacked for not participating in the strike – but emerged winners at the end of the day, when they brought in a record profit. Image credit: sltbbus.blogspot.com/Roshan Weerawarnakula

According to Wijeratne, of all the buses currently operating, 20,000 are privately owned, while 5,000‒6,000 are owned by the SLTB.

On the day of the strike, several reports surfaced of SLTB buses (who had not participated in the strike) being attacked. At the end of the day, however, it was reported that the SLTB recorded Rs. 120 million in revenue, resulting in a record profit: the income recorded was a 66% increase from the state-owned enterprise’s average daily income, which is around Rs. 72 million.

The next day, President Sirisena reportedly met with representatives of the associations and agreed to withdraw the proposed fines.

President of the AIPBOF, Stanley Fernando, told Roar that the President had agreed to resolve the concerns of the bus operators regarding the proposed traffic fines.

“During the discussions with the President, we insisted that increasing fines for high-speed driving and overtaking from left is unfair. The President noted that this was only a proposal, not a law. He ensured that justice will be served to us,” said Fernando, adding that the President had assured them that bus operators will be consulted when taking further action on this matter.

There is no doubt that traffic violations need to be dealt with – but is a Rs. 25,000 fine the best way to go about it? Image credit: gate20.com/Thomas Hansen

When the fine was first proposed, there were mixed reactions from the public, too. Some agreed that it would discourage drivers from breaking the law, while others said the fines were atrocious.

Speaking to Roar, former chairman of the National Transport Commission (NTC) and senior transport expert in the Transport and Logistics Department at the University of Moratuwa, Professor Amal Kumarage, said that while traffic fines need to be revised, the government should allow technical experts to revise them.

“Traffic fines need to be revised from time to time, there is no question about that. It’s about time our traffic fines are revised especially since the last time they were revised was in 2005,” he said, adding  “However, they need to be effective, affordable, and they must not be open for abuse. When fines are set, one must take into account all of this. The fine can’t be too low, because then it becomes ineffective. A fine can’t be too high, because then it is unaffordable,” he explained.

Professor Kumarage is of the opinion that the proposed fine of Rs. 25,000 is “open debate.”

He told Roar that “There is no question that imposing such a fine for driving under the influence, driving without a licence, or insurance and so on, are crimes worthy of the punishment. For such crimes, the fine is reasonable.”

He then went to say, however, that for the average driver, either employed by an organisation or self-employed,Rs. 25,000 may amount to a month’s earnings.

Furthermore, Professor Kumarage said that there is a lot of gray area surrounding the offences such as speeding and overtaking from the left.

“Speeding can happen due to carelessness and recklessness. However, while many countries have variable speed limits, Sri Lanka has only three. That is 50, 70 and 100 km/ph. It makes sense to have closer gaps for the safety of the driver and the passengers, but Sri Lanka doesn’t have that. Therefore, the driver keeps their own pace, and at times, that is not aligned with the proposed law,” he said, adding that many of these issues are also a result of infrastructure and road design.

This is why, he says, the matter has to be addressed by sectional experts like the police and sociologists, who are familiar with the transportation and traffic sector.

The Need For Revision

Professor Kumarage noted that, in order to properly address the matter, the government should approach it by means of appropriate legislation, and not via the budget.

“The budget is a way to raise revenue. And when traffic fines are introduced to the public in that manner, it is disappointing. It is important to increase fines for certain serious traffic offenses but it is disappointing to see such proposals come through the budget as a revenue measure instead of a genuine measure to reduce accidents,” he said.

He also noted that, “This particular proposal definitely needs to be revised before it is made into a law, and the sad thing is that most of these financial penalties are unequal in the sense that it will have a lesser impact on someone who can afford it than on someone who cannot. Thus, it will be much more credible if the government creates legislations outside of the budget.”

As Professor Kumarage points out, nearly 3,000 people die every year as a result of road accidents, so it is high time that stringent action was taken to address traffic violations and road safety.