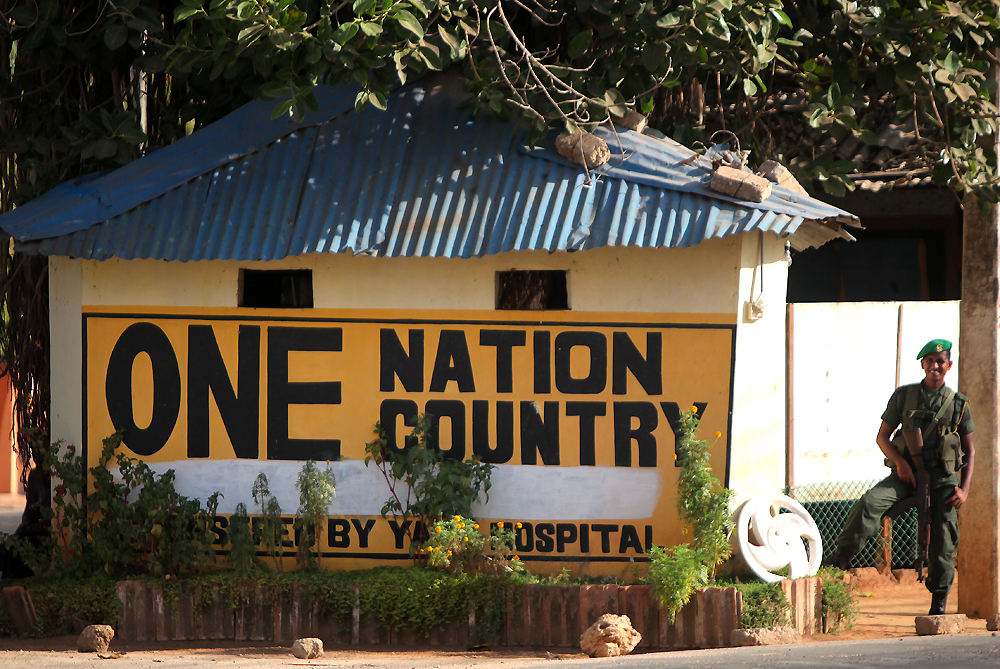 Transitional justice is a term that has been gaining momentum in Sri Lanka’s post-war political discourse; particularly at this juncture, with the Government of Sri Lanka (GoSL) having agreed to undertake certain transitional justice measures at the 30th United Nations Human Rights Council (UNHRC) session last year. However, the term is extremely polarising and contentious, so we decided to do a little digging into what exactly is meant by it and what it entails for Sri Lanka.

What Exactly Is ‘Transitional Justice’?

Although transitional justice is often associated with war crimes and accountability, it also involves a lot more than that. Image credit: AFP

The International Center for Transitional Justice (ICTJ) defines transitional justice as a set of both judicial as well as non-judicial measures to redress and deal with legacies of massive human rights violations. The United Nations defines the concepts as “the full range of processes and mechanisms associated with a society’s attempts to come to terms with a legacy of large-scale past abuses, in order to ensure accountability, serve justice and achieve reconciliation.” In a nutshell then, transitional justice is about Sri Lankans coming together to discuss how to address the past, and how to move forward in the process of nation building.

ICTJ emphasises that it is not a special kind of justice but an approach to achieve justice in societies that are transitioning from conflict through accountability and redressing victims, and thereby provide recognition to the rights of victims, restore trust between communities, and strengthen democratic rule of law. The core elements of transitional justice identified by ICTJ are criminal prosecution, truth commissions, reparations, and institutional reform, while memorialisation has also played a key role in previous TJ processes. However, this is not a one-size-fits-all foolproof formula ‒ for it is important that the processes come from within the country, to suit its specific context.  It is also important that the process is holistic, by engaging in a broad spectrum of approaches that complement each other.  For example, while judicial measures are an important part of transitional justice, these alone will not suffice to restore the broken social fabric and need to be complemented with other elements. Therefore while in Sri Lanka, transitional justice is often associated with accountability and war crimes, it is so much more than that, encompassing reparations, truth-seeking, institutional reform, and memory initiatives such as commemorations and memorials.

How Does This Apply To Sri Lanka?

Sri Lanka has had a nearly 30 year long war, and a much longer period of conflict. However, since the war ended in 2009, addressing the past ‒ particularly the final stages of the war ‒ has been a contentious and polarising issue. At the end of the war, there were a number of allegations of war crimes levelled at both sides involved. Some of the allegations  included in the most recent report of the Office of the United Nations High Commissioner for Human Rights (OHCHR) investigation on Sri Lanka (OISL) include unlawful and extrajudicial killings, arbitrary arrests and detentions, enforced disappearances, torture, sexual and gender-based violence, abductions and forced recruitment, and denial of humanitarian assistance among others.

The previous Government set up a Lessons Learnt and Reconciliation Commission (LLRC) “to look back at the conflict Sri Lanka suffered as well as to look ahead for an era of healing and peace building in the country” (LLRC Report, p.1) ‒ and to essentially deal with the past and related allegations. The LLRC in its final report released in December 2011, did address the root causes of the conflict and the need for a political solution, as well as several human rights issues under its period of review from 2002 to 2009. However, the Commission was not seen as meeting international standards for a number of reasons, and its report has been critiqued for not adequately addressing all allegations of human rights violations and questions of accountability (e.g. here and here). Although, a National Plan of Action (NPA) to Implement the recommendations of the LLRC was also drawn in 2012,  the previous Government was slow to implement the recommendations ‒ with a recent analysis revealing that of the 189 recommendations made in the LLRC, only 19 recommendations were fully implemented, with 59 recommendations seeing partial progress and 95 recommendations making poor progress.

As a result, there has been a lot of international pressure on the past and present Governments to address allegations of human rights violations through accountability processes and by fully implementing the LLRC recommendations. This is indicated in a number of international documents, mainly: a Joint Statement by the GoSL and the UN at the conclusion of the war in 2009; a UN Panel of Experts on Accountability report in 2011; consecutive United Nations Human Rights Council (UNHRC) Resolutions on reconciliation, accountability and human rights in Sri Lanka, from 2012-2015; and the 2014 OISL.

In the past, the Sri Lankan Government has maintained that the UNHRC Resolutions and the OISL were intrusions upon the country’s sovereignty. However, the latest 2015 UNHRC Resolution resolution 30/1 on ‘Promoting reconciliation, accountability and human rights in Sri Lanka’ stands apart, as the Sri Lankan Government co-sponsored the resolution, reaching a consensus resolution. This is significant for it means that the Government had its say in the drafting of the resolution and has taken ownership of the process.

What Has The Government Of Sri Lanka Promised?

A man cycles past a bullet-ridden building in Jaffna. Thus far, the Government has promised a number of measures to address the past. Image credit: http://visit-jaffna.blogspot.com/

Contained within the resolution is basically the Sri Lankan Government’s transitional justice commitment to dealing with the past. The Foreign Minister, Mangala Samaraweera, in a statement made at the UNHRC session in September 2015 elaborated the GoSL undertaking to establish 1) a Commission for Truth Justice, Reconciliation and Non-Recurrence, and 2) an Office of Missing Persons for truth seeking, 3) a Judicial Mechanism with a Special Counsel, and 4) an Office for Reparations. These four offices form the basic transitional justice process the state has proposed to undertake, and has also been included in the UNHRC Resolution 30/1 along with other measures as well (a comprehensive breakdown of the Resolution can be accessed here). A recent publication by the South Asian Centre for Legal Studies categorises the provisions under Resolution 30/1 into five areas; truth telling and right to know, special courts and justice for crimes, legal and institutional reform, security sector reform, and general commitments on transitional justice and human rights. The Government has also set an eighteen month period to get the mechanisms off the ground.

As per the UNHRC Resolution, the OHCHR is to provide an oral update at the 32nd Session of UNHRC set to begin in June 2016, and a final report in March 2017. Therefore the spotlight will be on the Government’s progress in its transitional justice commitments this month.

What Has Been Done, Thus Far?

The Government has already set up a Secretariat for Coordinating Reconciliation Mechanisms (SCRM), to ‘design and create mechanisms to achieve truth, justice, reparations and non-recurrence’. The SCRM coordinates all the official bodies working on transitional justice. Although the SCRM doesn’t carry out public consultations, a separate Consultation Task Force has been mandated with consulting members of the public (including via written and online submissions which have already begun) on the processes and mechanisms for reconciliation in Sri Lanka, to seek truth and justice, ensure accountability for human rights violations, and provide measures for redress. At the end of the process the Task Force, which consists entirely of civil society members and is an independent body, is to produce a report which is to be made public.*

According to recent reports, the Cabinet of Ministers has approved the establishment of an Office of Missing Persons (OMP)- one of the truth-seeking measures promised by the Government ‒ to help families of the many who have gone missing to discover the fate of their loved ones. This is an important step in the Sri Lankan context which has one of the largest caseloads of missing persons as a result of the three-decade long conflict and uprisings in the South. The GoSL has also signed and ratified the International Convention for the Protection of All Persons from Enforced Disappearance ‒ one of the clauses included in the UNHRC Resolution.

Furthermore, as promised at the UNHRC, the Government is also in the process of revising the Prevention of Terrorism Act (PTA) which has led to several violations, in accordance to international best practices.

Apart from this, civil society has taken the initiative to raise awareness and public discourse through workshops, research, and publications. There is also some interesting work in the arts and culture surrounding reconciliation and remembering the past. (see here and here)

Sri Lanka has been criticised for a lack of speed in implementing UNHRC recommendations, while there have been a series of challenges along the way. Image credit: wikimedia.org

However, there are a number of challenges and roadblocks. Although the basic processes have been drawn in the UNHRC Resolution, the Government has been slow to implement the measures, bringing to question the political will of the Government, and putting the entire process at risk of losing political momentum and the window of opportunity.

Another issue hotly debated is the sequencing of processes. While some see it as prudent to prioritise other transitional justice measures such as truth commissions and reparations first, and pace the contentious judicial measures and accountability later in the process, others argue that meaningful accountability is intricately linked to a political solution and needs to be prioritised to address impunity.

Judicial measures and accountability for those allegations of war crimes is perhaps the most contentious point of the transitional justice process ‒ particularly in relation to the role of international judges and prosecutors, with a lot of contradictory claims being made. While the 2015 UNHRC Resolution, which the Government co-sponsored, allows for the participation of Commonwealth and foreign judges, prosecutors and investigators, President Sirisena in an interview in January 2016 stated that the investigations need to be internal, sans foreign judges and prosecutors. This was also reiterated by Prime Minister Ranil Wickremesinghe, who has stated that the judicial mechanism will consist of only Sri Lankan judges in a recent report.

Why Transitional Justice, Why Remember The Past At All?

Justice and remembrance is an important process to bring about closure to those who have suffered. Furthermore, although dwelling on a violent past may seem counterproductive ‒ the basic premise is that of if you do not understand and address the past, it may come back to haunt you.

*Editor’s Note: This article originally read “the Government has already set up a Secretariat for Coordinating Reconciliation Mechanisms led by an eleven member Task Force, to ‘design and create mechanisms to achieve truth, justice, reparations and non-recurrence’. The Secretariat will hold consultations with the public across the country…” but this has now been corrected.