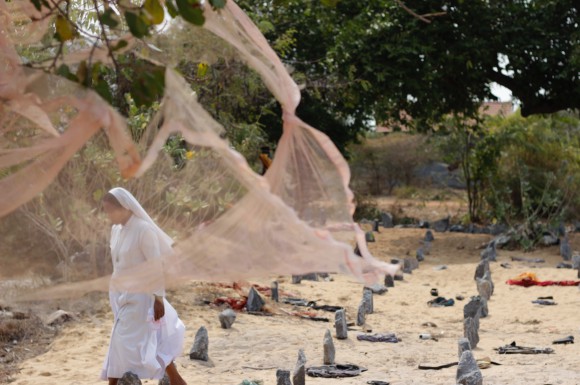 The harassment of a Jesuit priest, organising a memorial service to mark the brutal end of the Civil War—where at least 40,000 civilians are estimated to have been killed—has raised concerns over the continuing surveillance of memorialisation efforts in the war-scarred North-East and its effect on reconciliation.

Father Elil Rajendram had been organising an annual inter-faith prayer service at St. Paul’s Catholic Church, near Mullivaikal Beach, since the electoral defeat of the Rajapakse regime in 2015. Last year, Rajendram commissioned a memorial statue for the event. This year, he sought to add stones, carved with the names of those who died towards the end of the war, to the site.

Rajendram, who is a Programme Director at the Adayaalam Centre For Policy Research (ACPR), was questioned by Mullaitivu Police about these monuments on May 16, two days before the memorial service. On the night of May 17, Police obtained a court order prohibiting the memorial service, on the grounds that it was a threat to national security.

Lawyers who volunteered to represent Rajendram launched an appeal at the Mullaitivu District Court, early on May 18, hours before the memorial service was set to commence. After heated debate, the judge ruled that memorial services could continue, provided it was restricted to the church premises and not at the memorial site.

After being contacted by Rajendram’s legal representatives, a senior government official intervened by requesting the Inspector General of Police to cease all harassment of Rajendram and his family in Jaffna. But the situation has continued to escalate.

Mullaitivu Police have now requested Rajendram to submit a list of all names that were to be carved in stone as part of memorialisation. The list is to be sent to the Terrorist Investigation Department in Colombo, to ascertain whether any were former LTTE cadres.

A statue of a distressed man, woman, and child commissioned by Father Elil Rajendram in 2016. After obtaining a court order to stay memorial services, Mullaitivu Police stuck the order below the statue.

On the morning of May 18, the NPC conducted its annual memorial event under the searing heat of Mullivaikkal beach, where the last battles of the war took place. Just a few kilometres away, the Mullaitivu District Court was packed with police, activists, religious leaders, and journalists.

From the outset, the Mullaitivu ASP stated that he had no qualms with memorialisation. “People will misinterpret this incident and tell the international community that the government is against the Tamil people… This event was only banned because of its potential impact on national security,” said the ASP.

The ASP went on to argue that the community should conduct its memorial services away from makeshift monuments. “The ages of those named in the carved stones are between four to eighty-nine… however, those aged between eighteen and thirty-two could easily be LTTE cadres,” the ASP said.

In response, Guruparan argued that the Police had no right to dictate where the community could and could not conduct its memorial service. He also pointed out that following Rajendram’s initial questioning, the police gave approval to conduct the memorial service. “How did it suddenly become a national security issue overnight?” he asked.

Rajendram’s defence submitted that the names carved on stone were sourced from within the community and that no efforts were made to distinguish between religious and political affiliation. The defence also submitted that the Police could not argue on the grounds of national security based on pure speculation.

Said Guruparan, “If the government is arguing that the names on the stones are LTTE, then the government must provide a list of cadres for the community to cross-check the names.”

Father Elil Rajendram commissioned a local artist to carve in stone, the names of up to 500 people who died towards the end of the war. Only around 230 stones were completed before Mullaitivu Police intervened.

Shaken by the entire ordeal, Father Elil Rajendram says, “People need a space to mourn their dead, many of whom never received proper burial rights. Memorialisation is an integral part of reconciliation and transitional justice—issues that this government has publicly committed to.”

Under the Rajapaksa regime, there was an effective ban on memorialisation in the North-East, strictly enforced by the Police and military. Civic space has loosened since the coming of the Yahapalanaya Government, but concerns remain that the fundamental stance of the police and military, as well as politicians in Colombo, has not changed.

Last year, a court order was served, staying a memorial event organised by the Tamil National People’s Front (TNPF), a breakaway faction of the Tamil National Alliance (TNA). TNPF member, Gajendrakumar Ponnambalam told Roar, “The people being harassed change from year to year. Even with regime change, there is a clear attitude the state and the military have towards memorialisation in the North-East.”

It is currently unclear whether the Mullaitivu Police were acting on their own or following orders from higher up. Vavuniya Police DIG Deshabandu Tennakoon was reached out to for comment on the matter but was unavailable, while Police Spokesperson DIG Priyantha Jayakody refused to comment.

Speaking to Roar, Guruparan says, “I can’t imagine a matter as sensitive as this passing without the approval from higher up. In the event that the Mullaitivu Police were acting on their own, the government had more than 24 hours [from Rajendram’s questioning on May 16] to intervene.”

Activists and community members in the North-East—including Rajendram—have questioned why a community-organised memorial event was targeted, while those organised by political groups such as the NPC and TNPF continued unabated this year.

“What Father Elil was trying to do was institutionalise memorialisation with semi-permanent monuments,” explains Guruparan. “This is challenging to the state, which has imposed its own symbolic structures throughout the Vanni, as monuments to the victory of the military in 2009.”

Editor’s Note: TNA Spokesperson M. A. Sumanthiran was also reached out to for comment but was unavailable at the time.