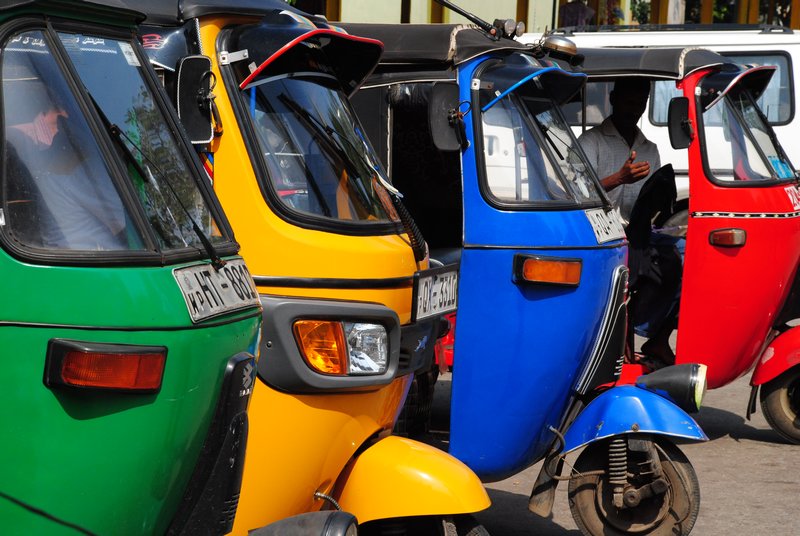 Three-wheelers ‒ fondly known as tuk tuks, are a colourful, relatively cheap mode of transport, and in a country like Sri Lanka, very convenient. It comes as no surprise then, that they are often the most popular mode of transportation for both locals and foreigners.

However, there have been a number of reports in the recent past about foreigners who have often been taken on a ride by tuk tuk drivers, and not just literally. Foreigners claim to have faced unpleasant encounters with tuk drivers, and some have fallen prey to scams, making them apprehensive about taking rides in tuk tuks.

One such incident was highlighted earlier in August, when media reported on how a couple of locals attempted to scam a foreigner.

The British national, William, says he was aware of such scams, and was wearing his GoPro at the time, and thus able to record the entire incident and post it on Youtube.

“I read about scammers in Colombo, Sri Lanka who lure people that are alone and vulnerable into their tuk tuk with the intention of robbing them. I was testing out my GoPro camera when I was approached by a man who told me a story similar to the one I heard before. I left my camera running and pretended to show some interest. I knew they were scammers from the start,” William states in his YouTube channel.

William was not the only one to highlight the issue of tuk tuk scams.  Lauren, a travel blogger, last year wrote about a bad experience in Sri Lanka, involving a tuk driver.

The blog post, titled “Scammed In Sri Lanka: The Thieving Tuk-Tuk Driver”, would give any foreign reader reservations about using tuk tuks here, particularly alone. The writer even begins her blog post with the line: “I felt safe in Sri Lanka until I travelled alone.”

She writes about her experience where a tuk tuk driver put her through a great deal of fear and anxiety, by first telling her that he would take her to his home and transport her in a car instead of the tuk tuk. When she vehemently refused to this plan, he did eventually take her to her destination in Negombo, but instead of charging the agreed upon Rs. 3,000 and giving her the due balance of Rs. 2,000, the driver drove off with her Rs. 5,000 note.

This post is not the only negative feedback about tuk tuk drivers in Sri Lanka that one can find on the internet.

Craig Moore, another tourist from the UK, shared travel tips with those who hope to travel to Sri Lanka, and it does not make us look good. The blog post, titled “Sri Lanka Scams, Fraudsters and Touts” tells his fellow travellers to beware of people ‒ tuk tuk drivers in particular ‒ who try to rip off tourists.

Such instances give the idea that vacationing in Sri Lanka will no doubt be an unpleasant experience.

The Great Rip Off ‒ A Blow To Our Tourist-Friendly Image

Once a source of excitement and fascination for tourists to the island, reports of tuk tuk scams have now made many people apprehensive and wary. Image courtesy: srilanka-tour-package.blogspot.com

Not all tuk drivers are necessarily scammers ‒ in fact, only a handful engage in dishonest practices. There are, unfortunately, those who frequent areas with a higher population of tourists, such as five-star hotels and malls/department stores, like ODEL, Crescat Boulevard, or Majestic City, waiting to claim their meter doesn’t work in order to charge a higher amount.

We witnessed a similar incident ourselves, not long after the YouTube video mentioned above was reported by the media.

Between the Hilton Hotel and the World Trade Centre in Colombo 1 is an area frequented by a particular group of tuk drivers. This writer, who was walking past them, was approached by a foreign couple who wanted to know the directions to get to Mount Lavinia.

The tuk drivers, who were nearby, immediately approached this writer and asked her to mediate between themselves and the foreigners, and to help them secure a hire.

The foreign couple then inquired about the fare to get to Mount Lavinia and the tuk driver in question immediately held up five fingers and said “five thousand rupees.”

Normally, in a meter tuk, the hire from Hilton to Mount Lavinia amidst heavy traffic would not exceed Rs. 500. This particular tuk driver was demanding ten times the usual amount. Fortuately, the foreigners recognised the scam, shook their heads, and walked a bit further for a meter tuk.

Instances such as these are not often reported, but they do happen. The fact that tourists come to Sri Lanka to spend and enjoy themselves does not mean we have the right to take advantage of them.

Meanwhile, the tuk tuk drivers have their own opinions to share on the issue.

What The Tuk Drivers Say

Although only a small number of drivers engage in trying to trick or overcharge tourists, other drivers feel this gives the profession a bad reputation. Image courtesy withlocals.com

Mano, a tuk driver who frequents the area just outside the Barista outlet near Majestic City said that the reason he doesn’t use a meter is because it causes him a loss.

“I don’t discriminate between foreigners and locals, and I don’t pretend my meter is broken like some others do. I don’t have a meter, and I speak with the passenger and agree to a price before leaving. If not, I refuse. I don’t scam anyone,” he said.

Raja, a tuk driver who parks near the Pettah Railway Station, smiled when asked whether he charges foreign travellers extra.

“We must eat too, ma’am,” he said, adding, “But I use the meter with everyone, white or brown.”

Most of the tuk drivers we spoke to denied all allegations, stating that they do not engage in scams. However, Mohommed, another tuk driver, said he knew of some drivers whose actions give them all a bad name.

“There are some groups who discuss among themselves and dupe foreigners into spending extra. At the end of the day, they share the profit. Charging ten to twenty rupees extra is one thing, charging an extra 1,000 or more is wrong. But they do it, and this is a black mark on us as well, who do an honest day’s work,” he said.

When Roar spoke to the Three Wheel Driver’s Association, spokesperson Sudil Jayaruk said that the association is deeply regretful of such incidents that besmirch the entire profession.

“We have requested the Government to create a regulatory body and to give dirvers proper training, especially for when dealing with foreigners,” he said. “Most people who enter this profession do so without proper professional knowledge. They leave school when they’re 17 or 18 years of age and buy a three-wheeler because it’s an easy profession. Some even make connections with or become a part of the underworld. They become thugs and only try to grab some extra cash the easy way by exploiting the foreigners. A regulatory body would prevent this from happening,” he said.

As for authorities acting on the issue, the police can only take action if the party who was wronged files a complaint.

With professional private transport providers such as Uber and PickMe entering the local transport scene, competition is tough for the other everyday tuk drivers ‒ more so for tuk tuks in Colombo running without fare meters.

It has long since been argued that a regulatory authority to keep a tab on tuk tuks and their services to the public is necessary. Although the Government has finally announced that such regulation is on the cards, it is imperative that whatever solutions put forward will address all prevailing issues, so that commuters both local and foreign can be assured safer travelling experiences.