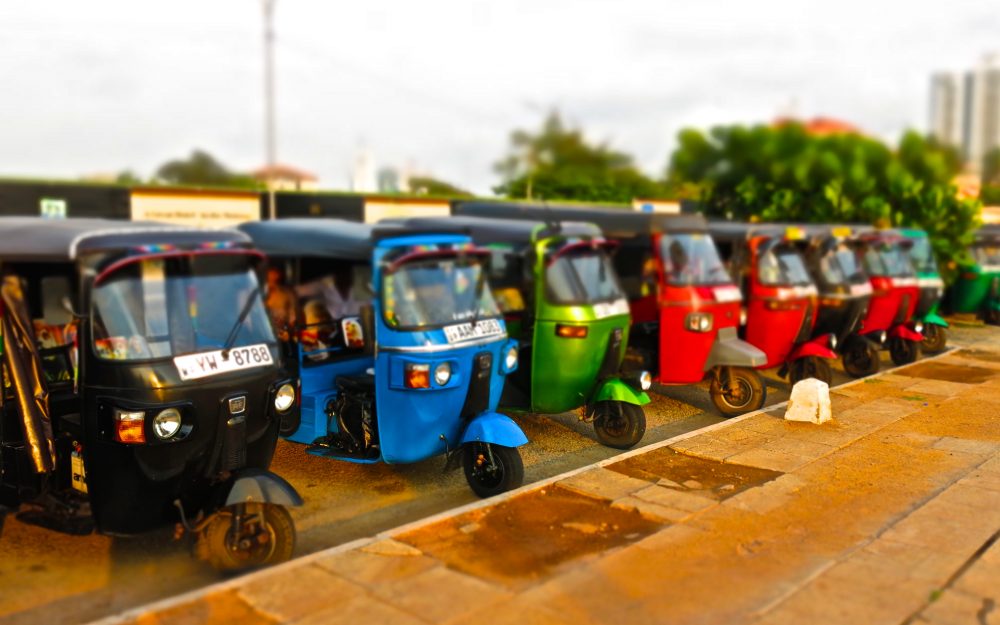 Have you ever been on a tuk ride to a known location and had to pay an unusually high fare at the end of the journey? Sometimes the difference could have been a few rupees and other times it might have been from Rs. 50 to Rs. 100. We tend to rationalise the figure by factoring in a longer waiting period or traffic, but truth be told, tampering with digital meters is a common practice.

Lalith Dharmasekera, President of the All Island Three-Wheeler Drivers’ Union, confirmed that nudging suspicion. “When you go on a tuk ride, the starting fare is Rs. 50, but thereafter with every passing kilometre, there are meters that charge from Rs. 30 to Rs. 45,” he said. What this means then, is that there is no uniform charge, which indicates that some meters may be tampered with. As Dharmasekera explained, “That disparity, when calculated with the total number of kilometres travelled, makes a huge difference.”

‘‘All that is going to change,’’ promised K.G.R. Manujith, General Manager of the Western Province Road Passenger Transport Authority (RPTA). The issue of unregulated three-wheelers, it appears, is finally being addressed by the authorities; a new regulation will be kicking off this week, to rein in over 500,000 three wheelers in the Western Province alone.

Meter tampering is not unheard of – but a new regulation may put an end to this. Image courtesy: sundaytimes.lk

The new regulation has been introduced and will be implemented by the Western Province Road Passenger Transport Authority. The Authority is, in essence, re-enacting the Gazette Notification of 2013 (1834/27) which mandated that all taxi three-wheelers operating in the Western Province must use meters.

According to the new regulation, drivers/owners who register with the Authority and obtain a meter issued by them will also be granted a permit which can be renewed annually. If the Authority, however, finds that the recipient has violated or breached any of the rules, they may reconsider renewing. The move, according to authorities, is to ensure that commuters are insulated from unscrupulous drivers and their safety is assured.

The gazette notification also cites that the owner of the three-wheeler cannot employ a driver who is not registered with the Authority. Registering under the new scheme provides the applicant a permit which they can use.

“Registration is purely optional,” Manujith said. He explained that, given the sheer number of three-wheelers on the roads, enforcing a regulation as compulsory does little to help regulate or improve the sector. “Some of the three-wheelers are used by companies and others are for personal use. Not all of them go on hires,” he said. “As such we cannot lay down a blanket regulation and expect all to fall in line.”

Manujith also said that repeated attempts by successive governments had failed miserably in formalising an industry which, for the longest time, had remained unregulated.

The Tuk Tuk Situation At Present

Currently, there is no regulatory authority at present for three-wheelers, which is a cause for concern particularly in terms of safety.

A 2009 case study by the Department of Transport and Logistics Management at the University of Moratuwa noted that there was no decreed institution responsible for three-wheelers and their operations in the country, hence the lack of information or studies.

According to the study, since there is no institution responsible for the three-wheelers, and their operations in the country is relatively recent, there is also a lack of socio-economic data on three-wheeler drivers and passenger profiles in Sri Lanka.

However, based on recent statistics released by JB Securities, a leader stockbroker that also provides comprehensive reports, three-wheeler registration recorded 4,151 units in April this year, up from 3,978 units the previous month.  The Department of Motor Traffic recorded 929,495 three-wheelers in 2014. JB Securities estimated that the number has now exceeded one million, after increasing to 1,003,300 by July 2015.

Despite an estimated 1 million tuk tuks registered in Sri Lanka, there is no regulatory authority for three-wheelers. Image credit: sri2011.wordpress.com

One of the problems the new regulation aims to address is commuter safety. According to Manujith, the Authority has been receiving complaints from commuters who had concerns for their safety and security. “This regulation would ensure that these commuters are protected from unscrupulous taxi drivers and that their safety is assured,” he said.

The new scheme, he emphasised, is only for three-wheelers which operate as taxis and only applies to those operating in the Western Province. Based on the new scheme, any driver who wishes to register is required to go to the divisional office of the Authority, or the divisional secretariat, for the registration forms.  They are required to pay Rs. 350 for the initial registration and Rs. 1,500 as the down payment for the meter.

What’s In It For The Drivers?

If registering with the Authority is purely optional, what incentive would three-wheeler drivers have to do so? As it turns out, according to this new regulation, the drivers stand to receive a number of perks when they register:

1. One year registration which can be renewed annually

2. A free SIM card from Mobitel from which Rs. 40 would be deducted daily until the total payment of Rs. 12,000 for the meter has been recovered.

3. 25% discount when purchasing tyres from DSI

4. 10% off when purchasing phones from Mobitel

For drivers who have read the above and are now wondering what the catch is:  the meters provided by the Authority also come with an in-built GPS tracker.

“There has been a spate of crimes where three-wheelers have often been used,” Manujith explained. “We are in discussions with the Police on how we can combat crimes better if we could trace the whereabouts of a vehicle involved in a crime,” he said.

While there isn’t any conclusive research on how many three-wheelers had been used in criminal activities, the Dangerous Drugs Control Board revealed last year that 10% of the drivers were drug peddlers.  Their research prompted them to submit a proposal to the President to bring in a law limiting the issuance of three-wheeler licenses only to persons over 25 years of age.

Manujith also added that the meters provided by the authority cannot be tampered with by drivers. Lalith Dharmasekara of the All Island Three-Wheeler Drivers’ Union welcomed this move by the Authority, stating that in 38 years since this profession came into being, this new regulation is a first credible step to formalising both the profession and trade.

The Lankan tuk tuk – no more a lone ranger left to its own devices? Image credit: sightseeing-lankatours.com

While the authorities are making plans, there are doubts, however, on the part of the three wheel drivers association. Sudil Jayaruk, representing the All Island Three Wheel Drivers and Owners Association, said he had reservations about the new regulation, citing that it looks more like a lucrative initiative than a progressive attempt to regulate this sector.

“There are a lot of discrepancies with this new regulation,” he said. “Many three-wheelers that are operating  in the Western Province are registered in another district. At the same time, there are three-wheelers which are used for both taxi and personal use. The regulations are not clear on either.”

He added that this  regulation was being enacted under the Western Provincial Road Passenger Transport Statute, hence it does not apply to the other provinces. He queried on what would happen if other provincial councils were to issue similar regulations.

Jayaruk added that his association has been calling on the government to establish a transport commission that would govern three-wheelers much like the National Commission for buses. He added that the association felt there were ulterior motives behind the new regulation, as it lacks basic guidelines. “This has to be done in a more cohesive and practical manner,” he said. “But from what we see, this is purely a money-making scheme. If the authorities can take even Rs. 100 from one three-wheeler, imagine how much that would amount to annually.”

He added that the new move was the reenactment of the old regulation sans proper guidelines. “This will fall through the cracks again,” he said.

The RPTA will begin registrations this week. The Authority intends to also promote the new scheme through the various divisional secretariats where drivers/owners may go to register. If the response is positive, officials tell us that they may even make the regulation compulsory, and perhaps add more benefits to the drivers as they go along. In an attempt to combat crime, the RPTA is currently engaged in discussions with the police on how this new meter, which comes with GPS enabled, may be used.  Only time will tell how productive or counterproductive any of these new moves will be.