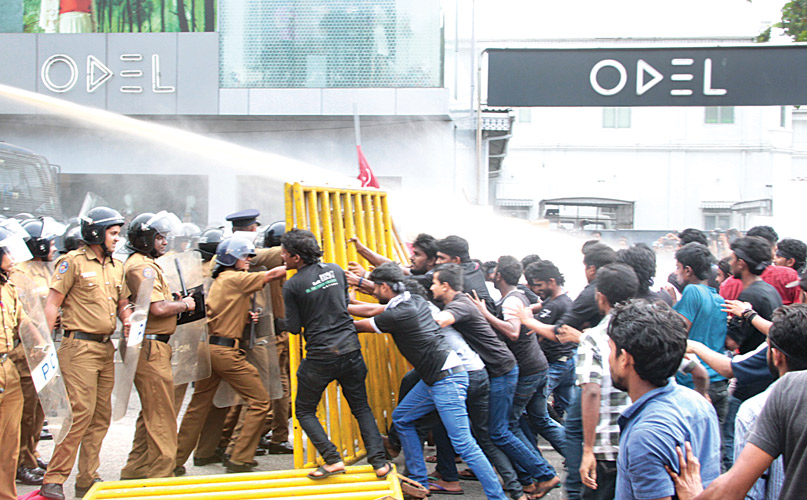 It’s been a relatively lazy week for news, possibly due to the poya on Tuesday – the highlights include protesting students, space debris heading towards Sri Lanka’s Southern tip and talks over a railway line from Maradana to Battaramulla. Here’s a brief recap of what happened this week in case you missed out:

WT1190F, an artificial/ man-made object, currently doing the rounds in space, is headed back to earth – towards Sri Lanka’s Southern end to be more precise. Several news outlets reported this, while Roar followed up with a comprehensive analysis and an exclusive interview with astronomer Nicholas Moskovitz, who was part of the team that made the discovery earlier this month. The date for impact of the space debris is 13 November, 11.50 a.m. Sri Lankan time, and scientists believe there is little cause for worry as most of the material will burn up in the atmosphere.

After previously reducing the vehicle loan margin from 100% to 70%, the government has brought it up to 90%, with effect from Thursday 29 October.

The Government is seeking a loan from China for the first phase of the Colombo – Kandy highway project, also known as the Central Expressway.

Given the increase in the number of vehicles on Colombo roads and increased traffic congestion, Sri Lanka Railways is looking into the feasibility of a 10 km railway line from Maradana to Battaramulla.

Higher Diploma in Accountancy students protested outside the UGC on Thursday 29 October, creating a major traffic jam in Town Hall. The police set off tear gas and water cannons at the demonstrators.

Busy week for the PRECIFAC

Irregularities with Sri Lankan catering is being investigated

The Presidential Commission of Inquiry to Investigate and Inquire into Serious Acts of Fraud, Corruption and Abuse of Power, State Resources and Privileges, or the PRECIFAC, has had a busy week.

The PRECIFAC were unable to hand over a notice to summon former Sri Lankan Airlines chairman, and brother of former First Lady Shiranthi Rajapaksa, Nishantha Wickramasinghe, on 28 October as they could not locate him. His wife is reported to have said that Wickramasinghe has not been home for three years, and that she is unaware of his whereabouts. The next day, however, Wickremasinghe informed the Commission that he was abroad and hence unable to receive the summons. The PRECIFAC is looking into a complaint regarding the irregularities at the Sri Lankan Airlines Catering Services.

This includes President Sirisena’s advisor on maritime affairs, Admiral Jayantha Perera. They have been summoned for questioning about the fraud and corruption allegations levelled against Rakna Lanka Security Company.

The PRECIFAC has also re-summoned MR to be questioned over the non-payment of money to ITN for political advertisements aired during the 2015 Presidential Election campaign.

Watch this space next week for our next news round-up.