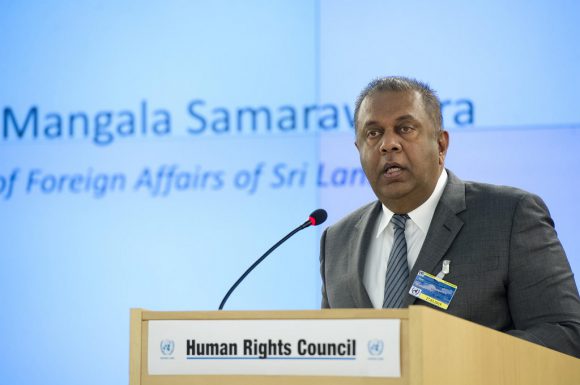 Last week, during the 34th session of the United Nations Human Rights Council (UNHRC), and a full 17 months since Sri Lanka’s co-signing of Resolution 30/1, Foreign Minister Mangala Samaraweera delivered a speech at a high-level segment in Geneva.

Kicking off on an uncharacteristically sombre note, Samaraweera said:

“Those of different faiths and beliefs, across gender, caste and creed, that constitute our country, worked together to gain Independence for our nation in 1948. That achieved, we failed to forge the perfect nation of individuals who all hold equal rights, working as one to achieve the heights our nation could attain.”

“As a result, for 69 long years, we journeyed through pain, violence, loss of life and precious human resources, ruining chances of socio-economic progress. This was clearly an experiment in nation building that failed, which is certainly not worth pursuing further.”

Implying that Sri Lanka is a failed state, due to the long-simmering ethnic conflict, is a stark admission by the man tasked to represent the island on the world stage. Samaraweera’s comments are also a unique admission of the state’s specific role in instigating the violence that has plagued post-colonial Sri Lanka.

However, Samaraweera goes on to set the current Unity Government ‒ which ousted southern populist Mahinda Rajapaksa ‒ apart from its predecessors. He emphasises:

“The Sri Lanka we seek to build here onwards, should be one where justice reigns; where human rights are valued; where every individual’s dignity is upheld; and where civil society and the media play their due role; a society that believes in the importance of the independence of the judiciary, and the rule of law; and where everyone has equal rights.”

The eloquent speech was reportedly met with positive feedback from many foreign delegates. There were also reports, however, of angry activists and advocates accosting Samaraweera later during the sessions in Geneva.

Here at Roar, we take a look behind the rhetoric and evaluate a few of Samaraweera’s statements to figure out just how far Sri Lanka has really progressed in bringing about reconciliation, accountability, and human rights as per its commitments to Resolution 30/1.

To help us, we spoke to the Research Directors of two local think tanks: Gehan Gunatilleke of Colombo-based Verité Research, and Kumaravadivel Guruparan of Jaffna-based Adayalam Centre for Policy Research.

On repealing the Prevention of Terrorism Act (PTA)

It is true that the Sri Lankan government has got the ball rolling on the Counter Terrorism Act (CTA), in an attempt to pull back and replace the internationally maligned Prevention of Terrorism Act (PTA), which has historically been the subject of much abuse.

However, the actual substance of the CTA leaves much to be desired, according to the researchers we spoke to. A draft of the Act, which was leaked to the public, contained a number of troubling clauses, chief among them: the criminalisation of speech that “threatens unity”.

According to Gunatilleke, the clause bears an eerie resemblance to a vague one in the PTA which criminalises speech that disrupts “communal harmony”, and was used to arrest and convict Sunday Times columnist J. S. Tissainayagam in 2009.

Gunatilleke is of the opinion that, “the scope of the offences [in the CTA] are too broad and will result in severe abuses and targeting of dissenting voices”.

Meanwhile, Guruparan argues that the formulation of the CTA has been shrouded in too much secrecy, and that while the Government says it is consulting the UN for recommendations, “we actually don’t know what is being proposed”.

Sri Lanka holds the dubious honour of having the second highest number of enforced disappearances in the world. Image credit: AFP/Lakruwan Wanniarachchi

“The Registration of Deaths (Temporary Provisions) Act No. 19 of 2010 was amended by Parliament, and the issuance of Certificates of Absence was enabled…”

Both Gunatilleke and Guruparan concur that the issuance of Certificates of Absence is a welcome move as it recognises the legal status of the disappeared while also providing long-suffering families access to state resources. However, they say that such a move will not help resolve the issue in the long-term.

On the establishment of a Permanent Office on Missing Persons however, things are more complicated. Historically, a number of commissions have been appointed by Sri Lankan heads of state – from Ranasinghe Premadasa, to Chandrika Kumaratunge, to Mahinda Rajapaksa – though very little has been achieved from these.

In May last year, Cabinet approved the establishment of a Permanent Office on Missing Persons, while also ratifying the International Convention for the Protection of All Persons from Enforced Disappearance.

While it is a step in the right direction, researchers say that the Act itself cannot be operationalised until President Maithripala Sirisena appoints the subject to a Cabinet Minister, who in turn must set the date on which the OMP will begin operating.

Moreover, recent amendments to the OMP Act have removed a clause which enables the office to make deals with external bodies.

Gunatilleke explains that this amendment could, “affect the OMP’s ability to secure necessary technical expertise and financial resources,” though he went on to say that “such shortcomings could be overcome given sufficient political will.”

In addition, Guruparan points out that, “the big question here is who will be on the OMP and whether the victims will have a say,” and that, “in the absence of a commitment to find the truth behind the disappearances, and criminal accountability for those responsible, it does not build confidence that the Government wants to tackle the issue of enforced disappearances holistically.”

Heavy military presence across the North and East continues to be a grievance for war-affected peoples. Image courtesy Tamil Guardian

At face value, these numbers are impressive. However, given a lack of accessible official figures regarding how much land has been acquired and occupied by the military, it is hard to get a scale of how progressive these figures are.

While any release of land is welcome, Gunatilleke emphasises that, “all private land has to be returned to the original owners,” and that a major hold up is “the military’s resistance to such land release.”

Gunatilleke goes on to explain that a holistic approach to addressing military occupied lands requires devolution of land power to the provinces – something that is required under the 13th Amendment to the Constitution, but is yet to be implemented.

“The Amendment requires that a National Land Commission be appointed with the inclusion of representatives of the provincial councils, to formulate policies on land,” explains Gunatilleke, adding that implementation would, “help address some of the serious deficiencies in current land policies, particularly in terms of equal allocation of land to all communities”

On addressing and preventing torture

“While taking the allegations of widespread torture seriously, the Government has a zero tolerance policy towards torture…”

It is indeed true that the Government has an official “zero-tolerance policy” when it comes to torture, however, whether or not this is applied in practice is another matter.

Guruparan states simply that, “the Human Rights Commission itself would disagree with Mangala’s assessment on this.”

In addition, Gunatilleke points out that around 420 torture complaints were filed at Sri Lanka’s Human Rights Commission (HRCSL) in 2015, after the Unity Government came into power. The issue of torture, therefore, is one that is systemic in the Sri Lankan state and not easily addressed through a simple change of government.

Says Gunatilleke, “The HRCSL, Law and Order Ministry, Justice Ministry, and National Police Commission will need to work together to combat impunity and transform the culture of law enforcement agencies. We cannot eradicate a systemic problem of this nature without such transformation.”

As Sri Lanka’s obligations outlined in Resolution 30/1 still remain unmet, reports indicate that the Government is ready to co-sign a new draft resolution that will give the state an additional two years for implementation.

All things considered, Gunatilleke explains that “the UNHRC has little choice but to give the Government more time”. However, he goes on to emphasise that, “it is vital that the substance of the co-sponsored resolution at the UNHRC is retained and that the Council remains seized of the situation in Sri Lanka.”

He added that “We have learnt that the main factor that animates the Government to deliver reforms relating to human rights and transitional justice is international pressure. There is no alternative to maintaining pressure while granting the Government more time.”

Guruparan offers a different interpretation. He argues that “there is very little political willingness to establish the mechanisms for accountability and justice.”

“What has been done has been done purely for international consumption. This Government looks at accountability issues as a foreign policy management issue, not as a matter of importance on its own right,” he says.

With a recent surge of protests by war-affected peoples across the North and East, growing economic discontent in the South, and continuing international scrutiny, all eyes are on what the Unity Government will do next.