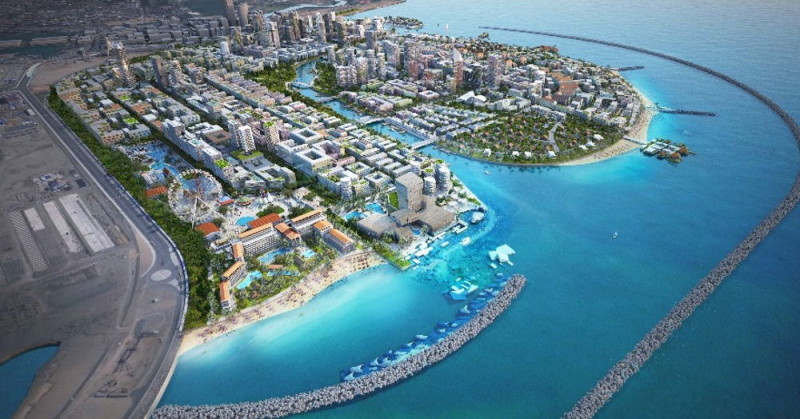 Sri Lanka’s current love affair with massive (foreign financed) development projects has been around for longer than the present Government. Of all these projects, the Colombo Port City project is arguably the most talked about. It has been commended, criticised, suspended, re-started and criticised again. With so much going on, we thought it would be a good idea to look back on what has been proposed, the current situation, and certain environmental concerns, starting with:

In September 2014, the Government announced the official launch of the Colombo Port City, a project predicted to forever alter the city’s skyline. Following the launch ceremony, the Government news portal, news.lk, released this article describing the $1.4 billion Chinese-funded project thus:

“The New Port City is a concept of President Mahinda Rajapaksa who was apparently inspired while on a visit to inspect the landfill being constructed for the Colombo South port.  Colombo Port City is a proposed offshore city in Colombo, Sri Lanka which is planned to be built on reclaimed land adjacent to the Galle Face Green.”

Since then, a series of issues have surrounded the Port City proposal, the least of which being the claim that the project was, in fact, originally proposed by the UNP Government in 2004.

As most of us are aware, political events that took place towards the end of 2014 and the beginning of 2015 meant that Port City plans were brought to a screeching halt. Interestingly enough, it was UNP Leader Ranil Wickremesinghe who, during election campaigns in December 2014, promised that the Port City will be scrapped. According to a Daily Mirror article dated December 16, 2014, the now Prime Minister had told tourist industry leaders that the project would “end up destroying the coastal belt from Negombo to Beruwala.”

Fast forward one year, however, and the project is back on the table, albeit under the purview of the Sirisena-Wickremesinghe Government.

What is the Port City, exactly?

The Port City’s Wikipedia page describes it as a “planned offshore city… to be built on reclaimed land adjacent to the Galle Face Green.”

What this essentially means, is that sand will be dredged off the bottom of the sea, and used to create an artificial extension to Colombo – and it is on this extension that the ‘port city’ would stand. According to a December 2015 report by the Central Engineering Consultancy Bureau, the Port City is to be located in the “shadow of the Colombo South Port breakwater” (breakwater construction is what has been taking place over the last few years, noticeable in the distance to anyone visiting the Galle Face area).

Ever since the idea was officially launched in 2011, stories abound as to what this seemingly fantastical addition to our city would entail. As far as we’re aware, the project will involve the construction of myriad economic, lifestyle and leisure possibilities, including, but not limited to: high-rise apartment complexes, shopping and entertainment centres, a wetland park, and, as the rumours go, even a Formula 1 racetrack.

According to one of the latest news reports, the Port City will also house a “financial hub connecting South Asia, South East Asia, and the Middle East.”

Some of the concerns voiced at the very onset of the project (which are still a little unclear) had to do with who would have the upper hand – given that it is being funded by China. What we know for sure, is that the (Chinese) Government-owned China Communications Construction Company Ltd. (CCCC) is the main (actually, only) investor, operating via the CHEC Port City company, based in Colombo.

Walk by the Galle Face area today, and you may stumble upon this notice. Image Credit: Azeez Abubakr

The latest news is, of course, that we’re going ahead with the Port City project, which had been suspended in March 2015. Just last week, Prime Minister Ranil Wickremesinghe announced at the World Economic Forum in Davos that the Port City project, as well as other Chinese-funded projects, will carry on, as planned under the previous regime.

Prior to this, a Chinese newspaper had also quoted Sri Lanka’s ambassador to China as confirming that the project had been given the green light.

According to Ambassador Karunasena Kodittuwaku, “The project will create employment, create tax income, and create indirect opportunity for other services… Everybody will benefit.”

Meanwhile, Roar spoke to Colombo Port City Project Director, Nihal Fernando, who explained that completion of the whole project is expected to take 25 years. As of now, focus is on the land reclamation aspect of the project, which will take around 3 years.

So, all in all, the Port City project does sound like the first step towards us becoming the next Singapore or Malaysia (an aspiration consecutive Sri Lankan Governments have been obsessed with, for some reason), but, as always…

Or two, or three, or even more. As most of you would have already guessed, one of the loudest alarm bells ringing in the background would be the one being sounded by environmentalists.

When we think of our future Port City, another existing example that may come to mind, is Dubai’s Palm Islands. Not much unlike what has been proposed for Colombo’s Port City, these artificial islands are being built for residential and leisure purposes, using sand dredged from the bottom of the sea. And although the Palm Islands have become an iconic addition to the UAE, the project came under criticism from environmental organisations such as Greenpeace, and in 2005 was predicted to incur a heavy cost to the environment. By 2009, there were reports of natural coral formations being destroyed, resulting in an adverse impact on the ecosystem.

Of course, such projects do not go ahead without serious debate on possible threats to the environment. In our case, the Government would have to seek an Environmental Impact Assessment (EIA) prior to commencing construction, which they did, back in 2011.

Note, this EIA was for the original plan, referred to as the ‘CESMA plan’, drawn up in consultation with the Singapore-based CESMA urban planning company. However, there has since been an extension to the initially proposed 200 ha area of reclaimed land.

This table best illustrates how the original Port City plan differs from the current one:

Hence, a Supplementary EIA (SEIA) was carried out under the new Government to address these shortcomings, and the report (the same one we referred to earlier on in this article) was released in December. It states that it seeks to address the issue of “altered design comprising an area of 269 ha, together with the impacts of extraction of sand from the identified borrow areas and quarry material required for the entire landfill and protective works.”

Of the 269 ha of reclaimed waterfront land, the ‘marketable land’ area is to make up around 173 ha. Although the Port City is expected to facilitate a number of commercial and residential possibilities, there will be no industrial activities allowed within the area.

Important to note, is that the report explains that it addresses only the first of a two-phase project: that is, “reclamation, sand extraction and construction of coastal structures to protect the landfill and landscaping aesthetics for the proposed Colombo Port City.”

The second phase of the project is what will involve actual construction of buildings and infrastructure – which, as it turns out, will require a separate EIA altogether.

Although the latest SEIA report claims that the “Port City has no impact on erosion South of the Colombo port”, among other assurances, environmentalists have more to say on the issue of overall environmental impact.

According to the report, the sand is to be acquired by dredging sea-sand from a 100km2 area along Hendala to Basiyawatta.

The rocks, meanwhile, are being mined from eleven different quarries in the Colombo and Gampaha districts.

Both these actions, Kariyawasam says, are already having adverse effects on not just the environment, but on people’s lives as well. In the areas where mining activities are being carried out, rocks are being blasted away using high explosives – something that has been affecting people who live in areas close to the quarries, claims Kariyawasam.

Furthermore, he says that, “after construction started on the breakwater of the Colombo South Harbour, the Dikkowita fisheries harbour has been badly affected.”

He explained that, as a result of sand-dredging activities, the Dikkowita harbour has also filled up with sand. This not only prevents larger fishing vessels from entering, but also creates problems for fishing communities in the area. A lot of money has to be spent, he adds, in pumping sand back to the sea.

And this is just one of many environmental concerns, he says. Kariyawasam, who is co-convener of the People’s Movement Against Port City, is one of several activists who have been campaigning against the Colombo Port City Project. Their concerns have spanned not only coastal and marine factors, but those concerning livelihood too – the livelihoods of fishermen in the Dikkowita area being a good example.

Furthermore, Kariyawasam says, the latest SEIA report underestimates the actual numbers of the fishing community who are likely to be affected by ongoing Port City related activities.

The SEIA report, with regard to such issues, has acknowledged the need for an “income support and benefits programme for fishermen”, one of many proposals made in the report. However, given that the project itself is barely in its initial stages, much remains to be seen, as to how serious an impact the proposed project could have on both the environment and people’s lives – and more importantly, how the Government will address these issues.

To add to this, Kariyawasam points out what he considers a major loophole in the matter of the EIA reports themselves: “They say they will call for another EIA prior to construction, but this is after the sand dredging activities will be carried out, so what is the point?”

As of now, according to Project Director Nihal Fernando, the Project is awaiting the green light from an expert committee appointed by the Coast Conservation Department. This committee is reviewing the findings of the SEIA report, and the public responses to it. There are a number of organisations who are a part of the project at this stage, including the Coast Conservation Department, the Central Environment Authority, the National Aquatic Resources Research and Development Agency (NARA), and the Geological Survey and Mines Bureau.

Should it go ahead – and the Government has already assured us that it will – the Colombo Port City will have much to offer: in terms of leisure, living space and economic activity. But will the benefits be available only to an elite few? And to what extent will we be able to continue with the project, with minimum harm to the environment? We still have a long way to go, so here’s hoping we can expect, at the very least, satisfactory answers to these questions.