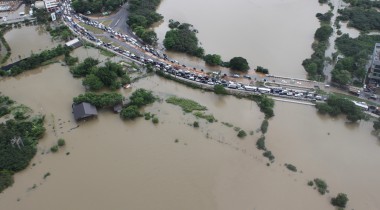 The floods came with tragic timing. The optimism that voted in “good governance”, terminally shrill even before the start, had already inverted into hysterical laughter. Even on May 26, disappointment followed disappointment—from the cabinet’s attempt to buy vehicles for Rs. 360 million to Minister Anura Priyadarshana Yapa’s protracted absence in Sri Lanka—and encouraged the Joint Opposition’s jeering.

According to the latest situation report of the Disaster Management Centre (DMC), the May floods have killed 213 and injured 134. Another 76 individuals are still missing. All over the country, the numbness of trauma is now fading and the pain beginning. During last week’s adjournment debate, members of parliament interrogated the government for 10 hours about its performance. Amid the murmur of anti-establishmentarianism, there is a real concern whether the government had saved as many lives as it could.

The Disaster Management Act of Sri Lanka has tasked the Ministry of Disaster Management with protecting citizens from 22 man-made and natural disasters. Of these, floods, landslides, tsunamis, droughts and cyclones are the natural disasters that frequently affect Sri Lanka. According to the DMC’s Deputy Director of Early Warning, Pradeep Kodippili, the government has a protocol, called Standard Operation Procedure (SOP), for each of the listed disasters. The SOP details the steps that each officer has to take before, during, and after a disaster, from the Minister in charge of the subject down to the most remote, minor bureaucrat. “In addition to this, we have created the national emergency operation plan,” said Kodippili, adding that “fifty organisations have been incorporated in it.”

The entire plan gets an overhaul every five years to improve upon its deficiencies. In the case of recurring, predictable disasters such as monsoon-related floods, the DMC brings together all the disparate organs involved in disaster management, including the Army, Navy, Airforce, and all Divisional Secretaries. “We discuss the kind of threat that is predicted for the given season,” said Kodippili, “then we compare the situation of the previous year, and allocate resources of the Ministry to where they are needed.”

Once the disaster management apparatus is engaged, the Emergency Response Committee coordinates every detail of the relief effort. This committee incorporates all the technical organisations that scientifically gauge disaster, such as the National Building Research Organisation (NBRO) and the Department of Meteorology, as well as organisations that facilitate the disaster response, such as the Ceylon Electricity Board, the fire brigade, and the Department of Irrigation. By collaborating with the Ministry of Health, the DMC has started an emergency operation theatre and given them the necessary equipment.

In addition to the above, Kodippili stated that the government spends approximately Rs. 650 million per year to proactively minimise disasters. This money goes to deepen tanks in anticipation of droughts, to create cultivation wells, and to carry out long-term rainwater conservation projects. According to Kodippili, the government has had success in reducing the magnitude of damage in many areas that have historically proven susceptible to floods.

“For example, in the past decades, the entire Panadura town used to get submerged during the rains,” he said. “Even the Panadura general hospital’s operation theatre used to get flooded. We spent about Rs. 40 million to build canals and roads, and minimised the flooding areas.”

On paper, all the 455,613 individuals who were affected by the May floods should have been alerted, efficiently scooped out of danger, and nestled in comfort. With TV coverage of May still searing our eyelids, it is disorienting to even visualise the last sentence.

Why This Disaster Was A Disaster

Kodippili blames, for the most part, the public’s apathy. The floods took over on the morning of May 26, and the DMC had issued warnings to the public through mobile phone text messages as well as through Divisional Secretaries and the media, on May 25 at 8:13 p.m. Kodippili maintains that the message was clear and imperative, identifying the danger zones and asking residents to evacuate immediately. “However, people don’t evacuate,” he lamented. “Some people said that they would stay in their upper floor and asked if they could be sent a helicopter in the event it floods.”

It is necessary for us to appreciate that we are not just dealing with questionable disaster management, but also with increasingly frequent disasters that bring exponential destruction. When asked whether we are witnessing effects of climate change, Kodippili said that there is a more immediate cause.

“Climate change is something that brings gradual, long-term effects,” said Kodippili. “For sudden disaster intensifications like what we are experiencing, we mostly have ourselves to blame. Deforestation, unplanned town building, uncontrolled urbanisation, these are the reasons.”

Kodippili thinks that Sri Lanka has been collaborating with its own fate for a long time. Human settlements have encroached upon the banks of the four major rivers that overflow: Kalu, Nilwala, Kelani, and Gin. The natural buffer that used to absorb the rainfall simply does not exist any longer. Kodippili said that in most areas that suffered from landslides, people had built on the natural slope that they were supposed to spare, thus weakening the soil. Deforestation, too, is spreading uncontrollably, with over 200 man-made fires reported per year, destroying thousands of acres of greenery.

“For nature to recover from these injuries, it takes a long time,” said Kodippili. “All these actions destroy the undergrowth of the forest, and exposes the vulnerable soil. With this setup, the rains will stimulate landslides.”

Are The People Alone To Blame?

Many of those affected by the disasters had to stay at improvised shelters and depend on irregular donations for food and medicines. Image courtesy AP.

None of this, however, explains why thousands were marooned on their rooftops for days, or why people had to seek refuge in makeshift shelters without any links to supplies. The government admitted with bewildering nonchalance that it had no designated evacuation centres. What existed was a network of temples, schools, and public compounds that only the Divisional Secretariats were aware of. The official plan left sorting out the evacuees till the midpoint of the crisis.

Speaking to Roar, Mahieash Johnney, Senior Manager of Communications and Partnerships at Sri Lanka Red Cross, said that the problem lies not in poor execution of solutions, but in a mismatch of problem and solution. He noted that, especially in case of floods, Sri Lanka does not have models on which to base a comprehensive prognosis of a disaster. Developed countries possess exact models of their cities and their drainage systems; along with exact calculations for a day’s expected rainfall, Johnney said that these nations can project the future damage and prepare accordingly. Meanwhile, Sri Lanka’s irresponsibly cluttered towns and villages make nonsense of all preparations made on paper.

“We are sitting ducks when disaster happens,” said Johnney, “and afterwards what we do is just try to survive. We need to equip ourselves with technology for proactive risk reduction.”

As far as the ground-level disaster management staff is concerned, Johnney said that they appeared well-drilled in protocol. “In terms of resources,” he said, “it’s different matter. What [DMC relief workers] usually do is appeal to [the Red Cross] if they don’t have supplies, and we find it for them from our branches or our headquarters.”

Is Disaster Management Beyond Developing Nations?

The Director General of the Department of Meteorology himself has stated that Sri Lanka is 30 to 35 years behind other countries in the use of technology. However, Sri Lanka has, in the past, crossed this time lag between the developing world and the developed one. The best example is Sri Lanka’s long-term response to the Boxing Day tsunami of 2004. After the earthquake occurred in Sumatra, Indonesia, the tidal wave took about two hours to travel across the Indian Ocean and reach Sri Lanka. When the ocean reared 40 feet high around the island’s coast, locals were still surprised. By the time the waters settled, Sri Lanka had lost more than 35,000 people. In 2004, South Asia did not possess a tsunami detection system of its own, nor did Sri Lanka have any disaster management mechanism to make use of what warnings were picked up from the Pacific Tsunami Warning Centre in Hawaii. Thirteen years later, Sri Lanka has evacuation protocols, warning towers, community-based risk reduction programmes that have their own alert systems, shelters stockpiled with supplies, and is a partner of the Indian Ocean Tsunami Warning System. The Disaster Management Act, the Disaster Management Ministry, and the DMC are all byproducts of the tsunami.

“The same way we learnt from the tsunami, we have to learn from floods and landslides,” explained Johnney. “We can’t stop a disaster. We can proactively reduce the risk.”

Without Anywhere To Run, Were The Early Warnings Useless?

Kodippili admitted that the DMC does not have a method of enforcing evacuation. The success of its job depends greatly on public cooperation. On its end, the DMC primes the disaster relief network by conducting training programmes. Kodippili said that the DMC has trained the government officials on protocol to be followed during flash floods and given them an incident command system. In 2016, the DMC has participated in an international training programme on evacuation drills for tsunami warnings, with the collaboration of 28 governments. Specially trained units have been deployed in the Kalutara District as well as in the Poonai Army Camp, Jaffna—the latter of which is capable of covering relief services to the entire Northern Province. Kodippili said that the DMC is particularly well-prepared for tsunamis, since learning from the disaster of 2004. The country now possesses 74 tsunami/cyclone early detection towers.

“We have given special training to the fire-brigade on the use of their equipment and on how to extract people who are trapped,” Kodippili further stated. “We spend approximately Rs. 100 million on equipment to these response units. For example, we have given them boats, rope, chainsaws, and life-jackets.”

The Political Toll Of The Disaster

Whether or not it has been unanimously endorsed by the public, this government has successfully marketed itself as good governance. Now, its failures are seen as failures of the ideal that it espoused. With brittle public confidence, the government should have prepared more for something as predictable as the monsoon. Those evacuation centres should have been publicised and stocked with supplies in advance.

There is no debate that the officials involved in the relief work performed with self-sacrifice. “It is the DMC that activates the disaster response teams in the military,” said Kodippili. “Even if a helicopter is being taken off, it is we who coordinate. I don’t think the public is aware of this duty that we perform.”

Kodippili further stressed that it is vital to have a public that is not merely resigned to disasters. “We have told the people living in landslide risk areas the warning signs,” he said. “We have gone from house to house giving leaflets on how deforestation and building on river banks contribute to disasters. The rest of it is in the hands of the people.”

The greatest priority for participatory democracy may not be institutions, but participation.