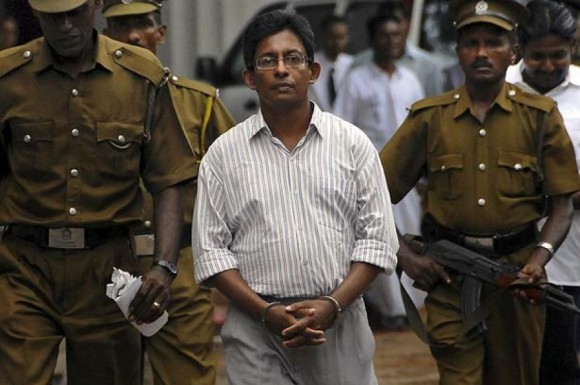 “It’s not something one easily forgets,” says Ruki Fernando, as he recalls his arrest and detention under the Prevention of Terrorism Act (PTA), in 2014.

Fernando was on a fact-finding mission in Kilinochchi, investigating a spate of PTA-related arrests in the war-affected area, when he was detained by the Terrorist Investigation Department.

“I know of one case where a lady had spent 15 years in detention, only to be acquitted and given no apology or compensation,” says Fernando. “In another case, a three-wheel driver arrested under the PTA was tortured so severely that he was physically unable to return to his profession.”

Now, three years after his arrest and release, a policy framework for a replacement of the PTA, has activists like Fernando spooked. Having twice read through a draft of this Counter Terrorism Act, leaked by The Sunday Times, he is baffled.

“The preamble [of the CTA policy framework] talks about terrorism and the terrible things it has done to Sri Lanka. But there is very little recognition of the state terror Sri Lankans were subjected to, through anti-terrorism protocols like the PTA.”

To date, at least three drafts of the proposed CTA have been leaked to the public. None have been formally acknowledged by the Government, which has yet to consult civil society and the Human Rights Commission of Sri Lanka, in the drafting process.

Gehan Gunatilleke, a Research Director at Colombo-based think-tank Verité Research, says that while international pressure was instrumental in initiating a conversation on reforming the PTA, the Government’s reliance on external consultation has been deeply problematic.

For example: “They may not be aware of how local police officers can potentially collude with lawyers to deny a suspect protection from self-incrimination. Admitting confessions to a police officer in the presence of a lawyer (which this proposed CTA permits) is very problematic in the Sri Lankan context.”

The CTA does improve on the PTA with some procedural protections – such as the requirement to produce a detainee before a magistrate within 48 hours, and the reduction of indefinite detention from 18 months to six months.

However, the strength of other protections, such as the requirement to provide notifications to the Human Rights Commission of Sri Lanka or the detainee’s family following an arrest, are diminished by being left up to the discretion of the police.

A report by The Sunday Times, has also raised concerns that the CTA’s criminalisation of sharing, “any information not in the public domain, the dissemination of which is likely to have an adverse effect on national or public security,” comes into direct conflict with the Right to Information Act.

Gunatilleke, warns that the definition of terrorism in the CTA, as anything that threatens, “the unity, territorial integrity, sovereignty, national security or defence of Sri Lanka,” is one of the broadest he’s ever seen.

“The law is broad enough to capture even non-violent protests against the state, or the dissemination of ideas that are anti-government.”

Balendran Jeyakumari, an activist in search of her son who went missing after surrendering to the Sri Lankan military in 2009, was detained under the PTA and separated from her young daughter. Image credit: Eranga Jayawardena/AP

Eight years after the war, and two years into the first term of a government that campaigned on a platform of reconciliation and economic development, some question whether or not counter-terrorism policies are necessary in a time of peace.

Fernando observes that anti-terror protocols like the PTA, “were used disproportionately against Tamil civilians,” during the height of the war and after. Often enabling racially-motivated arrests with little oversight and due process.

But in its earliest incarnation, the PTA was an emergency protocol established during the first JVP insurrection, often enabling human rights violations against predominantly Sinhalese youth and union leaders.

With the recent repression of union activity in the south, from the arrest of student activists, to the alleged abduction of a union leader, and talk of appointing former Army Commander Sarath Fonseka to ‘discipline the country’, there are concerns that things might come full circle.

General Secretary of the Ceylon Mercantile Union (CMU), Sylvester Jayakody told Roar that: “We have seen union actions contained through the courts and through police brutality. We don’t rule out counter-terrorism protocols eventually being used against workers too.”

The CMU had taken a strong stance against the PTA when under former leader Bala Tampoe. “We support the repealing of the PTA as it only serves to create a climate of fear. You never know when such a law can be used against you,” says Jayakoddy.

Fernando notes with concern that the SLFP and UNP—both parties comprising the present unity government—have historically abused the PTA when in power. The CTA, therefore, “isn’t just a means to counter-terrorism but a tool to contain dissent in the long term.”

“Maybe not this year, or next year, or even the year after that. But there’s no reason to believe that the very same parties that abused the PTA for nearly four decades won’t do it again with the CTA.”