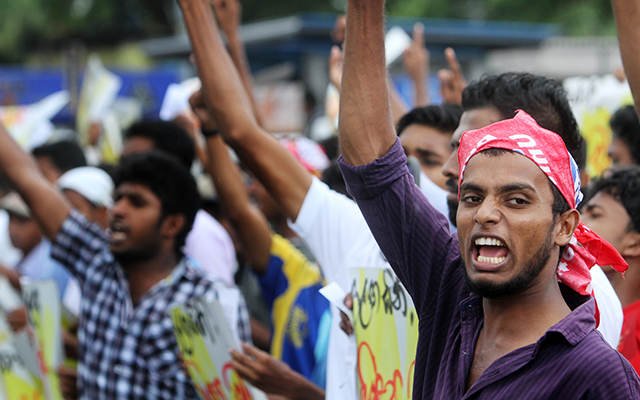 It’s been an active two weeks for many local university students. Nearly everyone who’s been in touch with the news would be aware of the student protests that took place. Not everybody is all that surprised however, and few may even have shrugged them off as occurrences not uncommon in our country. It’s true: Sri Lankan university students tend to protest. A lot.

How Do We Respond to This?

Should we be annoyed that the roads are blocked, and frustrated that these students always seem to have something to complain about? Afterall, it’s free education, how perfect can you expect it to be? Or, do we consider how serious the students’ concerns must, to drive scores of them out onto the roads, abandoning studies and instead holding placards and yelling slogans – sometimes even getting beaten up for this? Perhaps we should be glad that there is some form of dissent against the system – after all, the right to protest would imply freedom of expression, and that’s indicative of a functioning democracy… right?

The problems here are unfortunately not just multi-faceted, but have been debated, fought over, and dragged through the streets (literally and otherwise) so many times over the years.

Nevertheless. let’s try and break it down, starting with the most recent events:

The protesters outside the University Grants Commission on October 29 were mostly students of the Higher National Diploma in Accountancy (HNDA), and they had very specific demands. They were calling for the HNDA to be recognised as an equal alternative to the Bachelor of Commerce Degree, a demand they have been making for a long time, including at a similar protest held nearly a year ago, in December 2014.

According to Inter University Students Federation (IUSF) Convener, Lahiru Weerasekara, the HNDA graduates were at a disadvantage when trying to enter the job market – particularly the public sector – as a result of the state’s failure to grant HNDA graduates equal recognition as graduates of the Bachelor of Commerce degree.

The only solution at the time, he said, was for HNDA graduates to opt for a one-and-a-half year long ‘top-up’ degree course at a private institute after the four-year long HNDA course. This, of course, would mean that students would have to finance the top-up course themselves, which not everyone can afford –  a significant concern for a higher education system built on the principle of free education – and hence, the protests.

The protest turned ugly when police officers attacked the protesting students, and not just with the standard tear gas. Reports claimed that the police actually resorted to physical assault, beating up student protestors, as a result of which eight people had to be hospitalised.

The issue not only angered the university student community, who took to the streets again in protest a few days later, on November 3, but also reportedly caused a flurry in parliament on the same day, when Opposition MPs objected to the response of the police when it came to  handling the protestors.

This time around, it was about more than just the HNDA: these protests were aimed at the establishment of private universities in Sri Lanka, a long-time concern for the IUSF.

Students we managed to catch up with during the protest said that some of  the reasons for their opposition to such private institutions were:

According to IUSF convener, Lahiru Weerasekara, who spoke to Roar later last week, their primary concern was that these private universities prioritised profits over education. “We are against the ‘selling’ of education,” he said, adding that “we understand that the students who go to these institutions have a right to education… but these institutes are registered as private companies, whose main motive is to make money. The state needs to find an alternative solution,” he said.

What the IUSF may have overlooked, perhaps, is that allowing private universities to ‘sell’ education – as they claim – is the state’s current solution for being unable to accommodate the thousands of hopeful students vying for a seat in one of the country’s seventeen main public universities each year.

In all fairness, the IUSF’s lack of faith in private universities is not completely unfounded. Most of their opposition is directed at one private institute in particular, the South Asian Institute of Technology and Medicine, more commonly referred to as SAITM. This private university was established in Malabe in 2008, and has since run into a series of problems, mostly related to the private medical education it offers.

These problems include failure on the part of the Sri Lanka Medical Council (SLMC) to recognise medical degrees issued by SAITM, and state refusal to allow SAITM medical students training opportunities at government hospitals.

Reconciliation or a Band-Aid Solution?

There is no doubt as to the fact that Sri Lankan students have been facing a number of problems over the years when it comes to higher education, starting with the struggle to secure a seat at a state university. Agitation in recent times has also been fuelled by the question of what the new government is going to do about these problems – if it is going to tackle them at all, and how soon.

In fact, following the police attacks on students, the IUSF chose to place the brunt of the blame on the government, not the police.

The government, on their part, was quick to try and reconcile the situation. Both the Prime Minister and the National Police Commission set up separate inquiries into the police attacks on protesters. More importantly, the HNDA students finally had their wishes granted on Thursday (November 5), when cabinet approval was granted for a memorandum allowing the HNDA equal recognition as the Bachelor of Commerce degree.

The government last week did appear to show some concern for the problems faced by university students. The extent to which they will continue to act on this concern, however, remains to be seen.

Meanwhile, it is up to the student community, too, to decide upon what they really want. Ideally, demands should focus on one primary concern: an accessible higher education to whoever wants it.

However, looking back on some of the reasons student protesters had for their opposition to private universities – that students who failed their A/Levels were easily admitted, for instance – the question remains: does accessible higher education continue to be a shared concern? And how willing are students to come to terms with the solutions offered to the main problem of insufficient government universities?

This subject has never escaped some level of heated debate, as witnessed by opinions flowing across social media last week.

@Vindi_B @himalkk they think graduates of pvt unis are favored in job market. It's a dog in the manger argument.

@OsaadhiR @himalkk subsidized state education for students who could afford it. Less burden on the govt and free edu for lesser fortunate

In the light of this, we would also like to hear from our readers on the topic, so please feel free to leave your opinions in the comments section below, or tweet your thoughts using the hashtag #StudentProtestsLKA