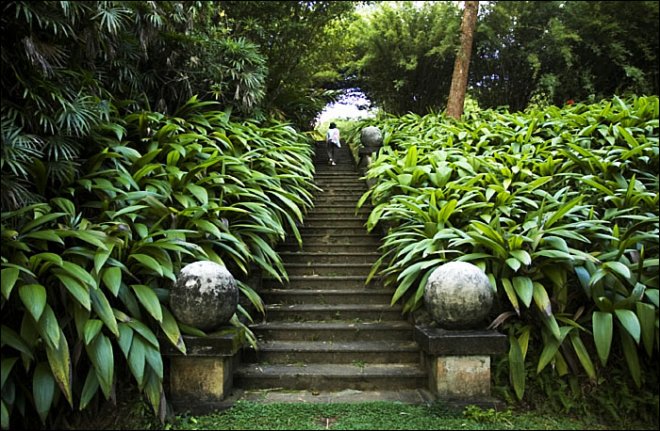 Brought to you by HSBC

The coastal town of Unawatuna is well known for its beaches, restaurants, and vibrant nightlife. It is one of the few destinations in Sri Lanka that draw in both locals and tourists throughout the year, who flock here to relax and enjoy the many attractions of the area.

And while Unawatuna offers plenty in terms of things to do, visitors also often encounter too-large crowds due to the area’s growing popularity. Fortunately, unknown to many travellers are a few hidden gems, less than an hour away from the town.

We’ve rounded up four lesser-known attractions neighbouring Unawatuna, that aren’t too far away to get to, and require less than a day to explore.

A half-an-hour’s drive away from Unawatuna, in the tiny village of Malalgama, Koggala, is the home of famed Sri Lankan author, Martin Wickramasinghe. The home, with its charming simplicity, is said to be over 200 years old and typical of Southern homes of the time. Wickramasinghe was raised here along with his siblings, and the section of the home which remains today is filled with the family’s belongings, including photographs, awards and souvenirs, which have endured the many years since it was last occupied.

Its preservation is credited to a female air force officer who chose it as her residence during the Second World War. The house was taken over by the Royal Air Force during this time, after they abruptly asked the villagers to vacate their homes, giving them only a day’s notice. The Wickramasinghe home was also one of the few that were not demolished to build a seaplane base. Today, it draws in visitors who are curious to see the home and surroundings of Wickramasinghe, who was often inspired by the area in which grew up in, when writing his much-loved novels.

The Folk Museum Complex was established in 1981 and is said to have been the idea of Wickramasinghe himself, who wanted to document the lifestyles and culture of the Sri Lankan villagers, from ancient to modern times. The museum contains artifacts that portray religious customs, folk song and dance, as well as the development of various livelihoods, such as agriculture, fishing, pottery, and metal crafts.

Both Wickramasinghe’s home and the Folk Museum require less than a day to enjoy. The lush gardens surrounding the complex are also ideal for a quiet, relaxing walk.

Another hidden gem associated with Martin Wickramasinghe, this island served as the main source of inspiration for one of the author’s most popular children’s novels, which shares its name. The name, Madol Doova, translates to ‘island of mangroves’. The island sits on the quiet Koggala Lagoon, also around half-an-hour away from Unawatuna.

Madol Doova arouses the curiosity of Wickramasinghe’s fans because much of the coming-of-age tale takes place on the island, where the protagonist, Upali, and his friend, decide to go and live on, dissatisfied with their relationships with the adults in their lives. Set in the 1890s and published in 1947, the novel is written in simple language and is an enchanting tale of the exploits of two youth who sought a life outside mainstream society. It was later made into a film, which also became a hit, in the 1970s.

Today, the island can be accessed via boat, and the journey to the island is a scenic one. Madol Doova is one of seven tiny islands that are found on this freshwater lagoon. Visitors can explore the trails of the island, which are fringed by thick jungle, whilst imagining the adventures of the two boys who dared to live and grow a plantation here.

Not so far away from Madol Doova are also other historical islands, such as one in which a 300-year-old Buddhist temples remains to date, and another in which lies a cinnamon plantation run by the same family for four generations. These, too, can be accessed by boat.

Madu Ganga is considered Sri Lanka’s second largest wetland, surrounded by thick mangrove forests that cover an area of 150 acres. Located in Balapitiya, it is a little less than an hour’s drive away from Unawatuna.

The mangrove forest of the river is of both historical and ecological importance, protecting the area from erosion and acting as a natural barrier during the 2004 Asian tsunami, which could have caused much devastation to the 200 families that continue to live here. Those who live here depend mainly on fishing and growing cinnamon to support their households. The type of fishing carried out here – called ‘kraal fishing’ – is distinctive; it’s not unusual to see the bamboo structures set up in the water to catch freshwater fish.

But it isn’t just fish that make this area rich in its biodiversity. In fact, there is said to be over 300 species of wildlife living in this area, including 111 species of birds, 31 species of reptile, and 50 species of butterflies.

Some of the best cinnamon on the island is found in the area, as it is a trade that has been maintained in this region for many years. Besides fishing and cinnamon, some families earn a living through boat rides, mangrove safaris, and other small businesses, including the more recently introduced fish therapy services. This therapy, as seen in other parts of Asia, allows little fish that are enclosed by nets to nibble on the dead skin of human feet, resulting in softer, smoother skin.

Legend has it that the lake was once home to around 64 islands, although only around 25 exist today. On one island,called Koth Doowa, sits an old temple believed to date back to ancient times. Another island, Maa Doowa, is where one can find a sacred Bo tree, which is said to have stood here for 600 years. Some others believe two other islands here provided shelter to two kings, Datusena and Mugalan, during times of conflict.

Often compared to a garden in a fairytale, the Brief Garden belonged to Bevis Bawa, the brother of celebrated architect, Geoffrey Bawa. A former Army officer and self-taught landscape artist, Bawa transformed a rubber plantation, which he inherited in 1949, to what is considered one of the most beautiful gardens in Sri Lanka. The garden is found in Bentota, about an hour away from Unawatuna.

The gardens, as well as the exquisitely decorated home, is open to the public on most days of the week for exploration. The garden is filled with many different varieties of trees, plants and shrubs, and adorned with interesting sculptures, ponds and pathways. Apparently, Bawa hired 15 gardeners to maintain the sprawling garden, which covers an area of 4.9 acres. The garden itself is considered a work of art, especially for its ingenious design, which is as unconventional as the lifestyle both Bawa brothers not-so-secretly lived.

Many renowned celebrities have been entertained at his bungalow, which sits amidst the gardens. Some of those who have stayed here are Sir Laurence Olivier, Vivien Leigh, Agatha Christie, and the Duke of Windsor. Brief Garden has also been both a vacation home as well as source of inspiration to Sri Lankan artists, such as Barbara Sansoni, Laki Senanayake, Ena de Silva, and Vajira and Chitrasena.

It is said that Bawa continued to develop his garden and create sculptures till 1992, the year he died at the age of 89. He left Brief Garden to his head gardener at the time.

These, along with other more popular attractions, are only within an hour away from Unawatuna, making it the best choice to base oneself in during a holiday in the Southern coast. Accommodation around Unawatuna is easy to find, with many beautiful holiday villas and bungalows along the beach offering attractive packages during special times of the year.

All HSBC credit cardholders receive 60% on bed and breakfast at Villa Tusk, Unawatuna, till 30th September.