The year 2017 was when Sri Lanka finally woke up to its pollution crisis. The country’s shockingly high consumption of plastic was largely ignored, until a ban on polythene lunch sheets, styrofoam boxes, and shopping bags was issued by the Central Environment Authority (CEA) in September, as part of a series of measures proposed by the Ministry of the Mahaweli Development and Environment. However, the crisis has not only stirred the government to act and take into consideration their own impact on the environment, but the private sector, too, has been inspired to find sustainable, long-term solutions to reduce plastic consumption. 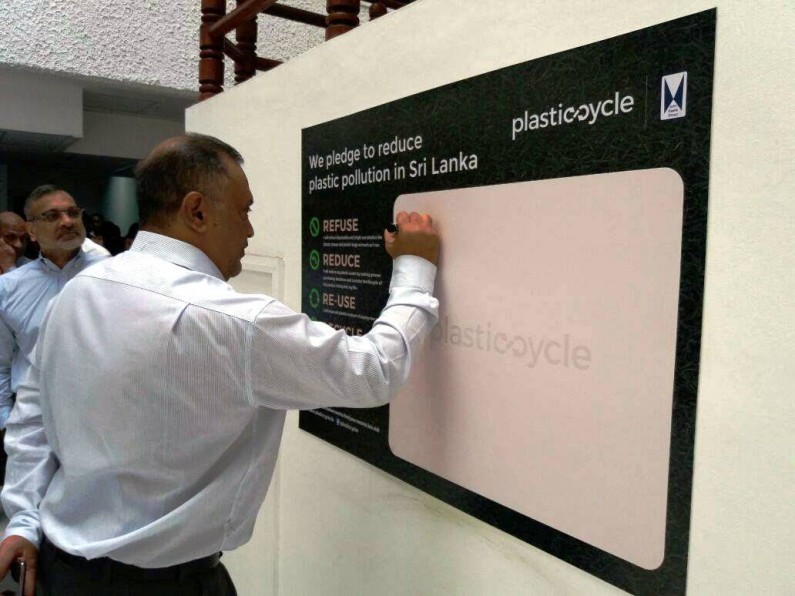 In the latter part of 2016, the John Keells Group embarked on a social entrepreneurship initiative with a vision of being a catalyst in significantly reducing plastic pollution in Sri Lanka. This is to be achieved through encouraging reduction in the use of single-use plastics, promoting responsible disposal, and supporting recycling initiatives.

The initiative, “Plasticcycle”, is currently being piloted in the Hunupitiya and Wekanda wards of the Colombo Municipal Council (CMC) with the intention of adopting the learnings from the exercise to expand the project. The Plasticcycle Bin at Slave Island

The first initiative under the project was rolled out in July 2017. It focused on encouraging consumers to reduce plastic pollution by disposing of their plastic waste responsibly through specially-designed Plasticcycle bins that are placed at various locations in the pilot zone, including the Keells Super, Union Place outlet. The bins have two well-marked slots—one for recyclable plastics, like bottles, cups, jars, and lids, and the second for plastic bags in which the recyclable plastics are brought for disposal. The public is welcome to dispose of their plastic waste provided that they wash off any soil or food (and crush-up all plastic bottles where possible), mainly to prevent any hygiene-related issues.

The Plasticcycle Bin initiative was launched in partnership with Elephant House and Keells Super, and has the support of The Sri Lanka Recyclers Association (SLRC), who have committed to collect and recycle the plastic collected in the bins.

Following the success of the pilot project, the bin placement was expanded to cover selected Keells Super outlets across the city, Crow Island, the Slave Island Railway Station, and few more places with public access. To date, 30 bins have been placed throughout the city and the project website offers a ‘Bin Locator’ search engine, allowing consumers to find a bin nearest to them. 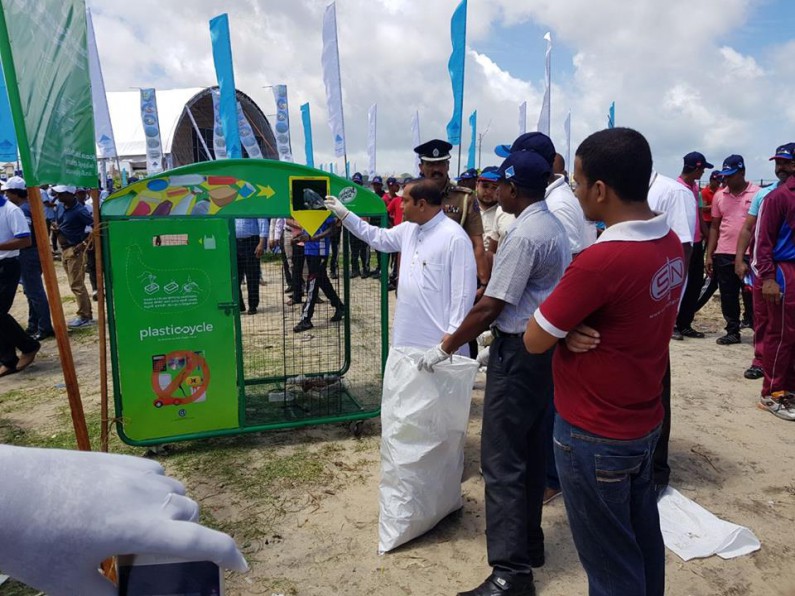 In September, Plasticcycle was invited by the Marine Environment Protection Authority (MEPA) to participate at the National Coastal Clean-up Programme. In October, the University of Sri Jayewardenepura joined the project as a technical partner. That same month, the project reached a key milestone, having collected one metric tonne of plastic waste in its bins.

While the installation of these bins provides a solution to those who are eager to help reduce plastic pollution in Sri Lanka, John Keells Group is keen to do more to find a sustainable solution to the problem. Currently, the group is working towards encouraging the adoption of the 4R’s—refuse, reduce, reuse, and recycle plastics—by influencing change in the behavioural and consumption patterns of consumers. The initiative has already rolled out awareness programmes in schools within the pilot area.  By doing so, they hope to instill in children a mindfulness towards reducing the consumption of single use plastic in their daily lives and encouraging them to spread the message to their elders. In fact, the project seeks to encourage all Sri Lankans to join the John Keells Family in taking the Plasticcycle Pledge, “Because a better Sri Lanka starts with me” with the hope of spreading the message that, as individuals, the little steps we take in our own lives to become more responsible citizens, will cascade into a sustainable solution for the country.

This approach, as John Keells Group envisions it, is the way the Group and Sri Lanka can move towards becoming plastic-neutral in the future.

Cover Image: In September, when Plasticcycle collected one metric tonne of plastic waste

This article was sponsored by Plasticcycle, a John Keells Group Initiative