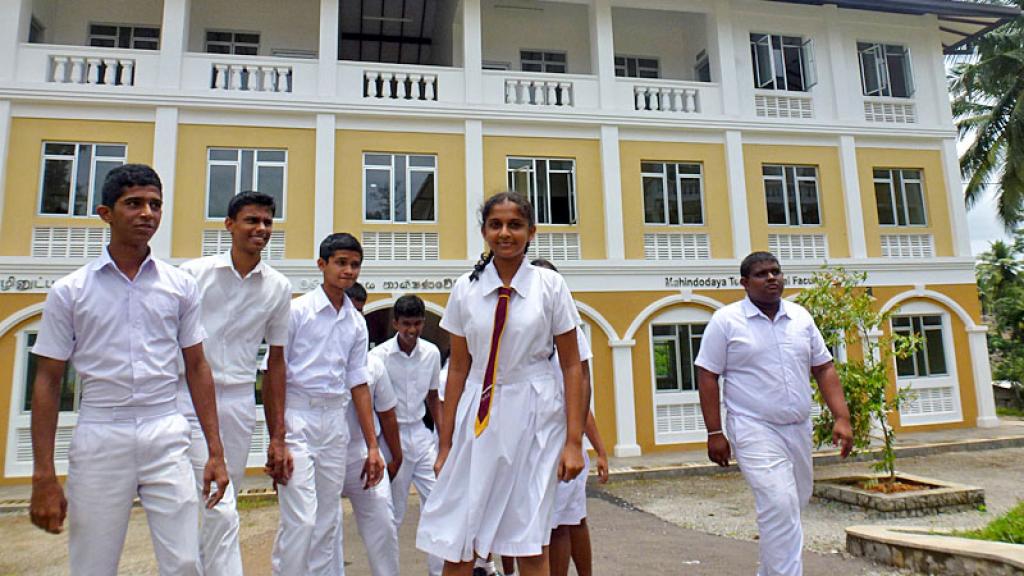 Education is the cornerstone of civilization. Formal schools have been around since the Classical Era, but the system of education has changed significantly through the ages. In past centuries, acquiring knowledge was a luxury that the poor and lower social classes could not afford to expend time or money on. What began as an elite privilege has given way to our current system, where formal education is compulsory on all children up to a certain age. At present, several countries around the world, including Sri Lanka, provide free primary, secondary, and sometimes, even tertiary education. Monastic education dates back to the 6th century BC in Sri Lanka, according to the Mahavamsa and Dipavampsa, which contain some of the oldest historical records of the island. Monasteries and temples were the first educational centres for both the Buddhist clergy and the lay people in Sri Lankan villages. Before colonial times, education was limited only to an exclusive group of individuals, which primarily included Buddhist monks. These monks would, in turn, instruct individuals from the upper echelons of the villages in reading and writing. In Tamil communities, teaching was the role of the educated Brahmins and Vellalars.

The curriculum of these traditional schools mostly involved religious studies, and practical or technical skills, which included metalworking, weaving, architecture, and geometry. Art and painting were also among the subjects that were taught. Outside of these schools, knowledge was inherited from father to son. Yet, the vast majority of the population did not have formal education, and remained unlearned and illiterate.

The ancient system of learning was followed by a more modern education system, which was introduced to Sri Lanka by its European colonisers. In the 16th century, when Sri Lanka fell under Portuguese control, Portuguese missionary groups set up a number of schools in Sri Lanka to promote Roman Catholicism. In the following century, when the Dutch captured the island, they introduced a Christian primary school system, which flourished for about a hundred years. The British took over the country in the late 18th century, and they proceeded to change the medium of instruction in Christian missionary schools to English language. This greatly reduced student attendance, as most of the Sri Lankans did not know English at the time. Royal College Colombo was the first government school for boys in Sri Lanka established by the British. Image source: mapio.net

In 1836, a standard system of government schools was established by the British based on the recommendations of the Colebrooke Commission, giving rise to the government-funded school system in the island, which persists to this day.  Royal College, Colombo, which began as a private school in 1835, was made the first government-run secondary school for boys in 1836. Most government schools taught students in vernacular, resulting in a resurgence in student attendance.

Sri Lanka’s modern education system began as a result of the country’s integration into the British Empire in the 19th century. Tertiary education institutions were set up by the British towards the end of the 19th century. Schools of other religious denominations were also established in the late 19th and early 20th century, resulting in a large number of Buddhist schools, and a few Hindu and Muslim schools. While this increased overall literacy rates in Sri Lanka, the school-going population remained largely male, and female literacy was still low. Education in government schools, which had always been mostly free, was made officially so in 1942. In the same year, the medium of instruction in all schools, except private schools, were changed to national languages, and every child received the religious education of their persuasion. By the late 1940s, the government was running 60% of the schools in the country. Many of the educational reforms occurred during this period, thanks to Dr. C. W. W. Kannangara, who proposed among other things, the concept of free education from kindergarten to university, establishment of central schools, change in the medium of education to national languages, as well as student welfare measures.

After Sri Lanka gained Independence in 1948, several new educational institutions were founded and the literacy rate increased. A number of private schools of the colonial era were nationalized in the post-colonial period. In the 1960s, the Curriculum Development Centre was set up to develop the curricula in mathematics and science. International schools were first established in Sri Lanka in the 1980s. Also, in 1986, National Colleges of Education and Teacher Centres were founded to provide training for teachers.

Much like the rest of the developing world, the foundational education system in most of the government schools in Sri Lanka has not undergone a significant change since colonial times, but education reforms have been carried out periodically from 1947 to 2006 in order to reach relative parity with international standards. However, the country ranks poorly in terms of harnessing technology, and providing access to computer facilities and the Internet in schools. While many countries in the developed world readily embraced the technology-led digitisation of education that began in the 1980s and revolutionised their existing teaching methods, the approach to teaching and learning in Sri Lanka remains firmly orthodox. Digital devices such as tablets, phones, laptops, computers and projectors are now being used to supplement education in many of the wealthier countries, making it possible to customize education to suit the learning preference of each individual. However, in Sri Lanka, these digital tools are still scarcely used in classrooms, mainly because most schools cannot afford them and educators are not up to date on the latest technology. There are very few personal computers per students, even in elite private schools.

The national and non-government schools have fared better, easing belatedly but surely into the digital age. Many of these schools have digital learning aids, such as the Internet, personal computers, scientific calculators, printers, and projectors. However, these institutions, too, suffer a lack of IT literate instructors. They also have much more to do in improving their teaching methods, which are still largely regimented, teacher-centric and examination-oriented, rather than flexible, student-focused and aimed towards increasing their understanding of concepts.

The Future Of Education In Sri Lanka

Sri Lanka has a long way to go in terms of digitising education. The process of digitising education progresses in three stages that begin with the use of audio-visual equipment like VCRs, TVs, and CD-ROMs, low speed internet connections, high student to computer ratio, and one or two teachers with the necessary IT skills. The second stage of digitisation involves the use of more advanced equipment such as multimedia projectors, higher speed internet connections, low student to computer ratio and an adequate number of instructors with IT literacy. The final stage involves student-led rather than teacher-initiated learning. Sri Lanka has not moved much past the first stage of digitisation, even though personal computers were introduced to schools in the late 1990s. Though computers were first introduced to some schools in the 1990s, Sri Lanka still has a long way to go in terms of digitising education. Image source: nec.gov.lk

Schools and students all over the world are now using sophisticated technology, digital tools, and social media to acquire knowledge, share information, invite discussions and seek opportunities. Long distance learning via the Internet and online learning through programmes, such as the Massive Open Online Courses (MOOCs), Coursera, and Lynda, have changed the landscape of modern education all over the world, shrinking space and overcoming boundaries. The future of digitised learning includes the gamification of education, the use of popular video sharing platforms such as YouTube as a learning tool, cloud-based and data-driven learning, and the use of 3D printing, virtual reality and augmented reality as teaching aids. Schools in developed countries have already begun adopting many of these futuristic tools.

In contrast, schools in Sri Lanka have yet to harness modern technology to the same extent. This has opened up a digital divide between Sri Lanka and the rest of the world, resulting in a lack of opportunity and preventing the country from progressing further in the digital world. In order to meet the demands of an increasingly digitised future, Sri Lanka needs an overhaul of the current education system so as to create more individuals and professionals with the skills and expertise needed in the modern, technology-driven world.

Regardless, education is taken very seriously in Sri Lanka and is mandatory for every child between the ages of 5 and 16. The island has an above average literacy rate of 92% and a primary school enrolment rate of 99%. Public exams are highly competitive, and students often supplement their school education with private tuition classes in order to excel. The harnessing of technology in Sri Lanka’s education system could do wonders for the existing curriculum, which is already known for being above par. It is hoped that with the increasing accessibility and affordability of technology, education in Sri Lanka will soon be able to evolve further and seamlessly progress into the Computer Age.

This article is brought to you by Tutor Wizard.