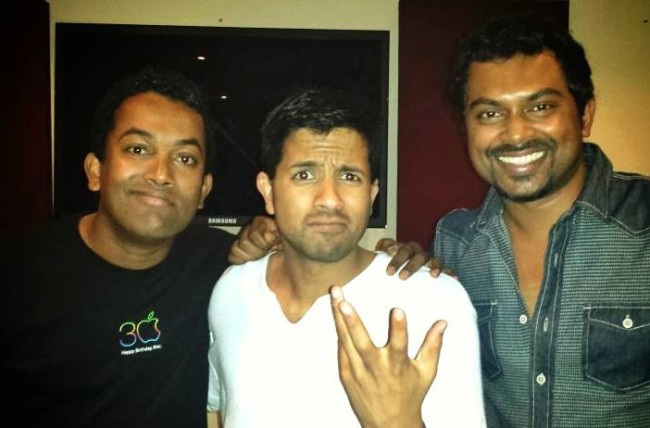 10 Types of Boys You Meet in Sri Lanka

Sri Lankan boys are a funny lot – even after most of them insist on being called “men,” they’re all still boys at heart and sometimes that’s not even a good thing. We don’t intend to start a war of the sexes here. We thought, for purely academic reasons, it would be fun to see how many Sri Lankan boy types we could name. Of course, this is not without its limitations, for in no way do we assert that Sri Lankan males conform to only *one* of the categories listed below. Nor are we saying that this type of behaviour is exclusive to the male Sri Lankan – rather, certain cultural nuances seemed to have seeped in, setting apart this male from the rest of the breed.

We’ve also listed out some types of Sri Lankan boys who are actual causes for concern. As much as we all enjoy our light reading, a few realities just cannot be ignored.

His hair is parted in the middle, his teeth are slightly crooked, his glasses are too big for the rest of his face and he only wears carefully buttoned down shirts. This type is the Sri Lankan mother’s “golden boy” who brings back trophies for all kinds of academic achievements. Socially, they are often awkward and introverted, and with little or no exposure to the female kind. We don’t mean all of this in a bad way, however. After the descriptions below, this kind is preferred to some of the other horrors, even if they could do with a bit of shaking up.

You find them everywhere. At the bus stop, at the mall, at the beach, at local events, even down your road. They seem to have X-ray vision which can penetrate even padded bras, going by the lecherous but otherwise vacant looks on their faces. This type, synonymous to the annoying local mosquito, is a lurker – you won’t realise until too late that you’ve been ‘ah nangi-ed’ and stung by the indignity of being commented on even if you are only getting something from the corner kadey. Defined by pseudo-bravado, lechery and ample amounts of sexual frustration, you could either ignore, take a swat at them or scare them off with by a sharp remark. Their bravado doesn’t extend beyond a chorus of “you are very beauty” and “can I have be your friendship” so, for the most part, they are left baffled by the fact that the object of their perverted desire is an actual human being who can talk back. But sometimes, you might get unlucky if the ‘ah nangi’ type is actually not an ‘ah nangi’ type but is a…

This type makes the ‘ah nangi’ types look positively sweet in comparison. Fed on a diet of what we guess is male chauvinism and bad upbringing, this is the type who has no qualms following you even up to your doorstep. If not on foot, at the worst, you’ll find this type on various transportation devices like a bicycle, moped, motorbike and even a BMW – what this means is that their psychotic inclinations have Marxist tendencies. They are classless, in every sense of the word. This type not only inspires nausea in the opposite sex, but also the need to carry anything at all that might serve as a weapon: an umbrella, a can of deo spray or even pepper spray. They have no boundaries whatsoever and are budding psychopaths, in our humble opinion.

Apey mey kolla is actually a sweet boi but poddak difficult to bring out in the open. Alone. He’s constantly shadowed by his muscle men, (even if they are technically just skinny boys), and he’s only seen in their company. Ever. You’ll never see him without that gang of bois – try arranging for a one-on-one and you’ll find that what you hoped was a date was yet another group outing. He’s all about his machangs to the point where he might even call you machang by habit. There’s nothing wrong with this type, but not being able to survive outside his machang circle might be a bit of a problem…

The ‘Machang I Drank Sooooo Much’ type

This type believes the only way he can prove he’s a man is if he boasts, a little too loudly, about how he got smashed the other night and how he got smashed on another night and how he got smashed on yet another night. The type of conversation you have with this type often includes gory details about the number of times he threw up, all in a single night. He even has a beer-and-rice-belly to support his claim. Their life goals include liver complications, an early grave and extremely bad breath. Baila is the soundtrack of their lives and their bodies are ever ready, despite the degree of inebriation, to put a jig or two. They initially come off as social (but not social drinking), talkative and seemingly fun-loving despite their repeated boasts and puke-talk. As soon as they approach a glass of alcohol or even the subject of parties and alcohol, immediate evacuation is advised.

This type makes Flash look like he’s working at snail pace, when it comes to the number of things and projects he’s involved in. From philanthropic drives to theatre productions to save-our-heritage programs, they must have been a centipede in a previous life: one foot for one of the hundred things they are working on. If you’re lucky and you happen to be a priority, you’ll get roped into their highly fascinating lives and land up with a case of acute vertigo. You’ll need to hire a secretary, though, to keep track of the things they are working on. Conversations with them often tend to go like this:
Him: You know that project I’m working on…
You *furiously consulting a notebook used to keep track of his projects*: Uh, um, you mean the Save the Stupa project, right?
Him: No, no, not that one…The other one…
You *still consulting*: The End Corruption one?
Him: No, no, that’s not the one…it’s the other one…

They are stubborn, incurable and believe that they are the most handsome, charming men around. How could any woman say no, right? Surely she must be teasing! Of course she doesn’t mean no!  He’s the type who believes that he loves her and that she loves him even if he has only seen her once in his entire life and even if she is completely oblivious to his presence, until it is too late, of course. He then makes a nuisance of himself, harasses her until she gets tired of him and his antics. Even if he stood a chance, his overenthusiasm killed it several decades ago.

There is such a thing, turns out. They are well read and well informed but not to the point of being boring. They spin out cool facts and political jokes at the drop of the hat and are often the creative type who will either build a rose out of scrap metal or try to save the world with a doctoral thesis, among other things. The only thing with this type is that they are rare, taken, gay or fictional.

Social media gives more of a voice to this type, unfortunately. This type is somehow convinced that they are immeasurably superior and that anything a woman does or says is naturally incorrect, especially if she is resisting his advances. Their contradictory dislike and need for women often take on an ugly face, particularly if she has an opinion of her own and doesn’t conform to his often twisted idea of what a woman should be – the Wariyapola incident and ensuing ugliness is proof. This type, however, has several variations within the sub-category. You also get the unconscious misogynists who have your best interests at heart but sometimes pass a tasteless but worrying remark, as well as the I’m-just-joking types you can never be sure of and even the I’m-really-broadminded types who find ankle-length skirts on women too “short.” Yes, they actually exist.

Seriously, who the hell is he? No one seems to know where he comes from or what he does. He’s always in the periphery, the kind of type you don’t really notice because he’s quiet, reserved and blends into the shadows so well that he might as well be a brand ambassador for Dulux. He could be anything – the nicest guy you will meet or the creepiest. There is no scientific way to verify “kowda boley meya” even if you see him at every event or party you attend. He’ll always remain mysterious and elusive, even after you’ve stalked his Facebook page 253 times. You might come to a few basic conclusions, things like the books he reads (Foucault’s Madness and Civilisation), the music he listens to (Philip Glass) and the people he quotes (Slavoy Zizek) but despite the wealth of such meaningless information, you’ll never find out things like his favourite childhood writer, his first love, what his first day at school was like etc. In all likelihood, he is probably a cyborg created by the GoSL to keep the womenfolk of Sri Lanka distracted. There is no other plausible explanation to their existence. Seriously.

Love them, hate them – we can’t escape them. We’ll always run into at least a few of these types on a daily basis. Some of them make our skin crawl, and some of them are a peculiar achcharu of a few of the above listed types, not always in a bad way, too. Everyone has their quirks and eccentricities but that doesn’t mean there aren’t any nice Sri Lankan boys who will restore your faith in the male species, right? Right?