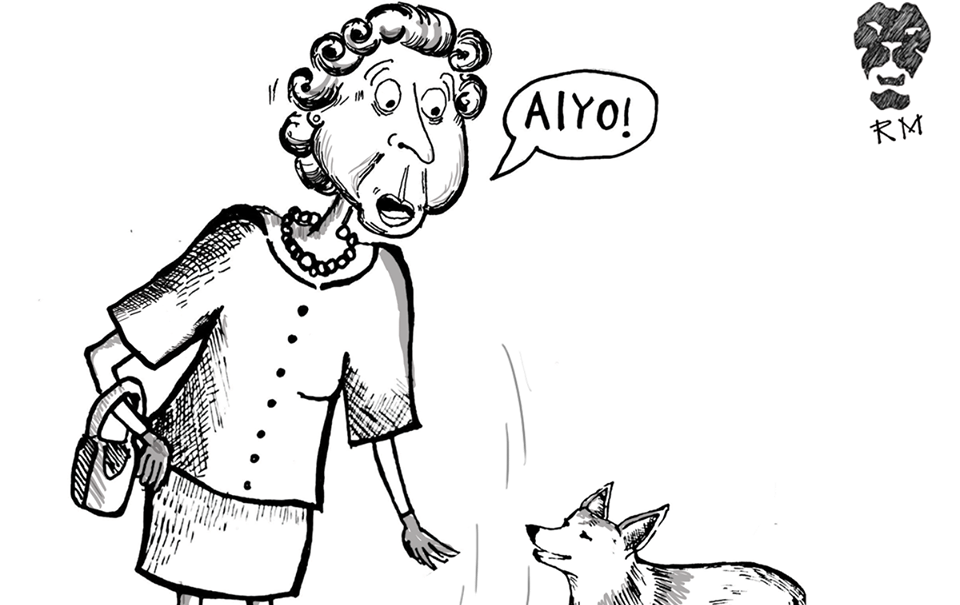 Next time you exclaim “aiyo!” and someone shoots you a puzzled look, you can actually ask them to refer to the Oxford English Dictionary for some quick troubleshooting. You may have heard by now that the September 2016 list of new dictionary entries includes the ever versatile Sri Lankan/South Indian expression “aiyo(h)”, much to the amusement of the denizens of the South Asian subcontinent.

Defined as an exclamation expressing distress, regret, or grief, “aiyo” is our go-to word for when the comparatively quaint exclamations “oh no!” and “oh dear!” fail us – which, as it turns out, is very often if you’ve been brought up either in Sri Lanka or South India.

So How On Earth Did ‘Aiyo’ Land Up In An English Dictionary? The English language has a history of borrowing words and phrases from the subcontinent.

Welcome to World Englishes, a post-colonial response to the hegemony the English language enjoyed in many English colonies. As a result of colonial occupation, English invariably ended up entering the linguistic fabric of the colonies. Many colonies, in turn, however, took the language and indigenised it with a local touch that has now to come be recognised as “Englishes”. Words such as “prepone” and “anyways” for example, belong to Indian English, one of the many forms and manifestations of English.

What should be kept in mind, however, is that the English language itself is a result of a confluence of many cultures. English is a West Germanic language that developed over the years through the many invasions of the British Isles. From Old Norse to Old Norman, to loanwords from Latin, Ancient Greek, French, German, and Dutch, the English language has borrowed heavily from different languages. The borrowing and subsequent expansion of the English lexicon never stopped at the European region. Many words that we use so casually, like bungalow, cash, and shampoo, for instance, originate from subcontinental languages. Bungalow comes from the Gujarati word “bangalo” or the Hindi word “bangla”, meaning house built in the Bengal style. Cash meanwhile comes from the Tamil word “kasu”, Sanskrit word “karsha”, and the Sinhalese word “kasi”, while shampoo comes from the Hindi word “champo”.

With English reaching the status of a global language and the world’s lingua franca, and with the number of its users growing exponentially, it isn’t unusual at all for words like “aiyo” to land up in the dictionary. All they have to do is meet the criteria. JehanR: bringing iYo to the mainstream before the Oxford dictionary did.

Turns out there is. It is pretty much the same criteria that govern the entry of words like “selfie” being included in the dictionary. While many have, over the years, expressed their dismay at the entry of modern lingo into the dictionary, essentially the Oxford English Dictionary serves as an ever-growing source documenting the growth and usage of the language. It doesn’t act like a language police, and while it helps standardise spellings, usage, and meaning, it doesn’t discriminate between words that some may deem to be mere fads or unworthy of a dictionary entry (although this writer still contends that the inclusion of the laughing emoji as the word of the year for 2015 was pushing the limits, an argument for another day, perhaps). What the Oxford Dictionary editorial team mostly looks out for is frequency of usage – if the word has been used by various types of literature (in a broad sense of the word) over a space of time, it qualifies.

Where foreign words specifically are concerned, volunteers worldwide can send in their material, through the online OED Appeals campaign. That’s probably how the word “aiyo” landed in the dictionary in the first place. According to the official dictionary entry, the term dates back to the late 19th century, originating from the Sinhala word “ayiyo”, with the earliest use found in the Chamber’s Journal of Popular Literature.

Other Words Of Sri Lankan Origin In Common Usage

Some words, which are mostly everyday currency, can be traced back to Robert Knox’s An Historical Relation Of The Island Of Ceylon, and have even gained international usage. Some of these words are betel-leaf, bo-tree, Buddha, poojah, and rattan. Similarly, you won’t be hard-pressed to find definitions for words like kithul, dissava, ambalama, vihara and our cutesy kabaragoyas and thalagoyas on the internet, although not all these words have specific dictionary entries. There are several other words which Knox highlights in his book, which have more regional, and therefore area-specific, uses.

Knox’s book, in particular, was instrumental in allowing Sri Lanka a tiny place in the giant linguistic canvas of the English language, into which “aiyo” has now been ushered in. It may seem silly, or even laughable, that aiyo rubs shoulders with words like poojah and bo-tree, but you cannot deny that in every Sri Lankan’s (and South Indian’s) vocabulary is a special place carved out just for aiyo, which no other word can or will ever adequately replace.