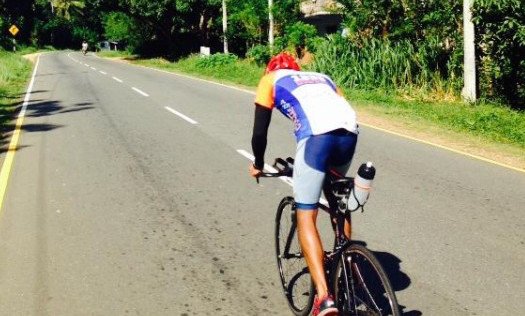 Cycling around The island in 13 Days

“It’s as easy as riding a bike” they say, but the expression would lose all meaning the way these riders do it.

The recently concluded CCC1333 Bikeathon was a cycle ride around Sri Lanka. Organized by the CCC Foundation (CCCfoundation.org.au), its main objective was raising awareness to the number 1333, a toll free hotline operating between 9 am and 9 pm that provides emotional support and guidance for people facing difficulties, or for someone who simply wants to talk to someone about their problems.

We managed to catch up with some of the riders and coax them into retelling their must-say-it-themselves kind of stories, recollections and individually amazing experiences.

Compose an article on your journey around Sri Lanka on a bicycle, I think it would be easier to do the ride again.

With 13 days of constant travel, at one point it felt like the days were melding together, “where were we yesterday?” was a question I kept asking my bunk-buddy, Tisara. 13 days filled with new faces, places and experiences; being on the constant move and getting ready for constant motion the following day, it was like having an adventure in your own backyard. The variety in terrain, climates and environment just proved how lucky we truly are, living in Sri Lanka.

It’s quite a different experience seeing anything on a bike, let alone an entire country. You tend to admire the beauty of a sunrise and sunset more when you’ve ridden 100km to witness it. You’re feeling the heat of the midday sun on your back, you’re feeling the toll of the rides on your body, yet somehow, seeing the coast – beaches with water so clear you can see all varieties of underwater flora and fauna, beaches that probably hadn’t seen many tourists and holidaymakers in years, made one forget the hardships of the road.

And, oh, the people we met along the way! On the way to Anuradhapura we happened to stop by a house quite out of the way, suffering through the drought. The family offered our riders water to douse themselves with in the burning sun, an act of compassion I’m sure none of us will forget. The fishermen in Mullaitivu who we joined in hauling in the catch for the day, rewarded us for our efforts with a bucket full of fish, which eventually found its way to our supper table.

Sri Lankans have long been known for their kindness to strangers, and to experience it first hand, was really something else.

Some of the highlights of the ride itself included rolling down the A-9 and crossing Elephant Pass, the riders going in search of egg hoppers and egg rotti (half boiled of course!) in the evenings, having conversations with the riders who came from all walks of life, but bonded through their love of cycling and as one of the riders, Hendrik, quite rightly put, “Going from individual riders to being a great team.” Some of our wildlife highlights were riding alongside peacocks and monkeys as we got closer to Yala and riding past an elephant on the road, while the volunteers in the bus distracted him/her with bananas.

The riders, each and every one of them, were sources of inspiration and motivation. Jetha ayya with the 3 C’s of Courage Compassion and Commitment, Julius ayya’s willpower, Shane ayya and Tisara setting out for runs after we reached our destinations (demigods of fitness or just plain old simple mad, I know not – just kidding), Lalanthi akki and Yasas ayya our ride marshals who ensured that we got to our destinations safely and who always had something positive to say. Mithila ayya and Jimmy ayya with their witty remarks that kept spirits high, Sarinda ayya with his one line during the Monaragala leg, “Keep going, the worst is behind you,” the volunteers who had ice packs, chilled water and food waiting for us at each pit-stop along the way, who I think put in double the effort the riders did, waking up in the morning to have our meals along the road ready, stopping at major towns helping spread awareness of the cause. Each and every rider be it on a cycle, a motorcycle, a bus or a van made those long roads much easier, and sitting here in a corner of my friend Jehan’s room prattling away at a keyboard, I miss the family I met on two wheels around Sri Lanka, see you soon.

The main thing that runs through your head as you course through seemingly endless roads is safety first. Having to evade the busses zooming past is not easy. We had a couple of falls, nothing too severe thankfully. One time one of the cyclists fell sideways and the guy behind had to jump the bike over him to avoid going over his neck, which was intense.

It’s so interesting to know that you’ll wake up in a new place every day and knowing that everywhere you go you are spreading this message which is so important. While we were cycling by, we would see confused faces and people asking what it’s all about, and when we stop for a break they gather around and we explain to them what we’re doing and it’s always support and words of encouragement that we were met with.

One time in the North, we were on the road and relentlessly battered by the scorching heat prompting constant hydration and the occasional escape into the haven of shelter, so using just signs and minimal Tamil, we asked this man who lived in an extremely small space if we could just get some shade, and he just took us all right in. Our group of 15 was not a small number to accommodate in such a modest setting, but he still gave us an entire loom of bananas and made us all the sweetest tea we’ve ever had. It truly was humbling to see such generosity being shown even in conditions of abject poverty. We asked him why the tea was so sweet, and our translator told us that when he has guests in his house, he only gives them the best.

Somewhere between Anuradhapura and Killinochchi…

There was one day, when we were in the North and there was a girl who’s was abused by her father and his friends repeatedly and her plight was such that she considering taking her own life. However when she had seen us cycling by she called the number on impulse. She was so afraid to even say what was going on for fear that her father would find out. She wanted us to come and help her, but we couldn’t at that point and had been asked to minimize personal interaction since we weren’t qualified. It was the trained and qualified counselors who did handled entire situation and related the story to us eventually, telling us that child protection services came in with the police and immediately acted on it to take her away and make sure she was safe.

The next day’s route was supposed to be easy a 100km route, but due to a few road problems we had to take an additional 60km detour, but not a single complaint was heard. Everyone just cycled on with this story in mind and the purpose we were riding for gave us the grit to just keep going.
Then there’s also a bit of fun here and there, like when we played passing the secret where the first cyclist tries to send a message to the last and it usually just ended up in something completely ridiculous.

This is a story I know I’ll be telling my grandkids about.