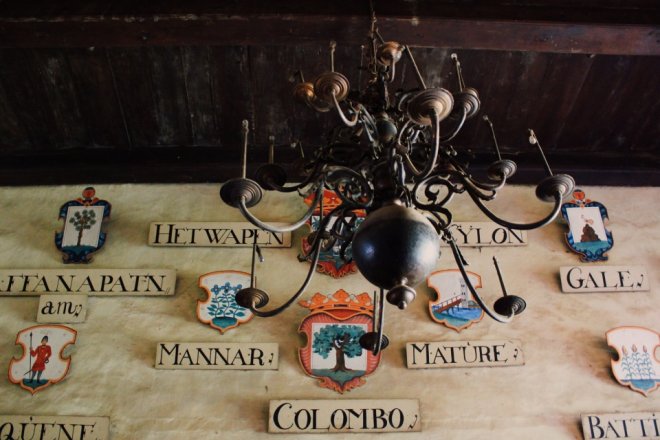 When the Portuguese found Sri Lanka in 1505, they made a deal with the king of Kotte to use the coastline for trading, and so the city of Colombo was born. The Dutch drove the Portuguese out in 1656 after a siege, and, over a century later, the British captured Colombo in 1796.

Colombo was long known for its natural harbour by Indian, Greek, Chinese, and Roman traders, and apparently Arabs settled down in Colombo in the 8th century AD, but, according to Ashley de Vos, an architect who has specialised in colonial architecture, “there’s very little evidence of that.” In fact, de Vos told Roar that there is little evidence of people living in the Colombo area at all, prior to colonisation. He also said that a lot of buildings came up after the port was completed. Today, the oldest buildings in Colombo mostly date back to the era of Dutch rule, because the Portuguese buildings were destroyed when the Dutch took over.

We’ve compiled a list of some of the oldest structures with historical value in Colombo, spanning from the 17th century to the early 19th century.

Probably one of those buildings for which you usually wouldn’t spare a second glance, Wolvendaal Church is actually one which deserves way more than that. Situated in Wolfendhal Lane in Pettah, the church was built in a Doric architecture style, with walls about five feet thick.

The governor of Ceylon at the time, Gustaaf Willem van Imhoff, sought approval from the Dutch East India Company to get rid of the existing church and build a new one, but they refused.

They didn’t refuse when Julius Valentyn Stein van Gollenesse arrived in 1743, however. He planned to build the church outside the city walls, in the marshland. The Europeans called that area Wolvendaal, after mistaking a bunch of jackals for wolves.

The exterior of the church as it is today. Image courtesy sundayobserver.lk

The church, with its old furniture dating back to the 17th and 18th centuries and archives holding marriage and baptism records from 1620 to 1936, is still in use today, and the records are being conserved with the financial support of the Royal Netherlands Embassy.

When you walk into the church you are greeted with a feeling of sobriety and awe – the place smells like history, and underfoot are many tombstones, making you wonder if you should be standing there in the first place. The church is dilapidated on the outside and silent on the inside. It is not abandoned, though – there are Sunday services, and a caretaker hovers around. You may get the feeling that dead Dutch people are watching you from their graves, but the church is a good place to visit to appreciate some history.

A drawing of the Dutch Hospital dating back to the 18th century. Image courtesy sundaytimes.lk

Currently a shopping-dining precinct, the Dutch Hospital is believed to be the oldest building in Colombo. As recorded by Christian Schweitzer, the building has existed since 1681, and was originally built to look after the staff of the Dutch East India Company.

The building has five wings – four are joined to form a central courtyard, and the fifth is the face of the building at the front of the square, with another small courtyard between it and the rest of the centre. The front wing has an upper floor.

The Dutch intended to run a hospital good enough to treat the local Dutch population as well as officers on board ships. They had a chief surgeon, a surgeon, three junior surgeons, and five interns working there. Paul Hermann, who is considered the father of botany in Sri Lanka, worked there.

The surgeons visited the hospital twice a day and also went to patient’s homes when they were called for. The hospital had a steward who was in charge of medical supplies for the patients.

The space between the first wing and the rest of the building. Image courtesy writer

Now, it is a place where you can dine with friends. There are signs and modern technology everywhere, which ruins the historical charm of the place, but it is not a bad place to hang out with friends and family (if you’ve got a considerable amount of cash in hand, of course).

A view of the President’s House. Image courtesy nation.lk

Since 1804, the President’s house has been the residence of Sri Lankan presidents and British governors, and had been called the ‘King’s House’ or ‘Queen’s house’ right up until 1972.

The current house occupies land which once belonged to the St. Francis Church. This church also owned the same land as the Wolvendaal Church.

Johan van Angelbeek, the last Dutch governor of Ceylon, built the large two-storied house on the land where St. Francis Church had once been, after claiming the land for his own. He left it to his granddaughter, who sold off the building to the British to pay for a fine her husband owed them.

The President’s house is now used by President Maithripala Sirisena for state functions. It was briefly open to the public in June 2016, but now remains a high-security area.

A view of the upper floor from the courtyard. Image courtesy writer

The museum on Prince Street, Pettah, was built during the Dutch occupation by Thomas van Rhee, the Governor of Ceylon from 1692-1697. During the British period, the building served many purposes, such as being an arms store, an army hospital, and a telecommunications centre.

The museum was also once a teacher training college from 1696-1796, an orphanage financed by the Dutch East Indies Company, a police training school in 1900, and the Pettah Post Office in 1932.

The chandelier hangs by a wall adorned with nameplates of places. Image courtesy writer

It was decided in 1973 by a committee with representatives from the National Archives, the Department of Archaeology, the Ceylon Tourist Board and the Netherlands Alumni Association of Lanka, to restore the place and turn it into a museum. The building was open to the public in 1982, displaying items from the Dutch colonial period.

Dutch tombstones lay on the floor in the tombstone room. Image courtesy writer

The Colombo Dutch Museum is now a secluded building with not many visitors. A ticket to enter is 20 rupees for locals, but 500 rupees for foreigners, and a camera permit is 250 rupees. There are signs in Sinhalese and English around the artifacts, and there is a room where a mannequin Dutch couple resides in a closet. The central courtyard has a view of the neighbouring area, giving it a sort of Maze Runner feel. The whole place has an eerie atmosphere, with the smell of dust in the air, and the oldness of it all leaves you feeling rather amazed.

Barely noticeable when you’re trying to survive Pettah, Kayman’s Gate is a small bell tower right at the edge of 4th Cross Street.

It was originally an entrance to the former Colombo Fort. Apparently, the bell dates back to the 16th century, hanging at a St. Francis church in Kotte until it was abandoned. The Dutch found it, brought it back, and it was then used as a curfew bell in the newly-constructed bell tower. The bell was also used to call worshippers to the Wolvendaal Church. Now it is fenced off and invisible amid the hustle and bustle of Pettah life.

So there you have it; the oldest structures in Colombo. Feel free to comment below if you think we missed out on any.