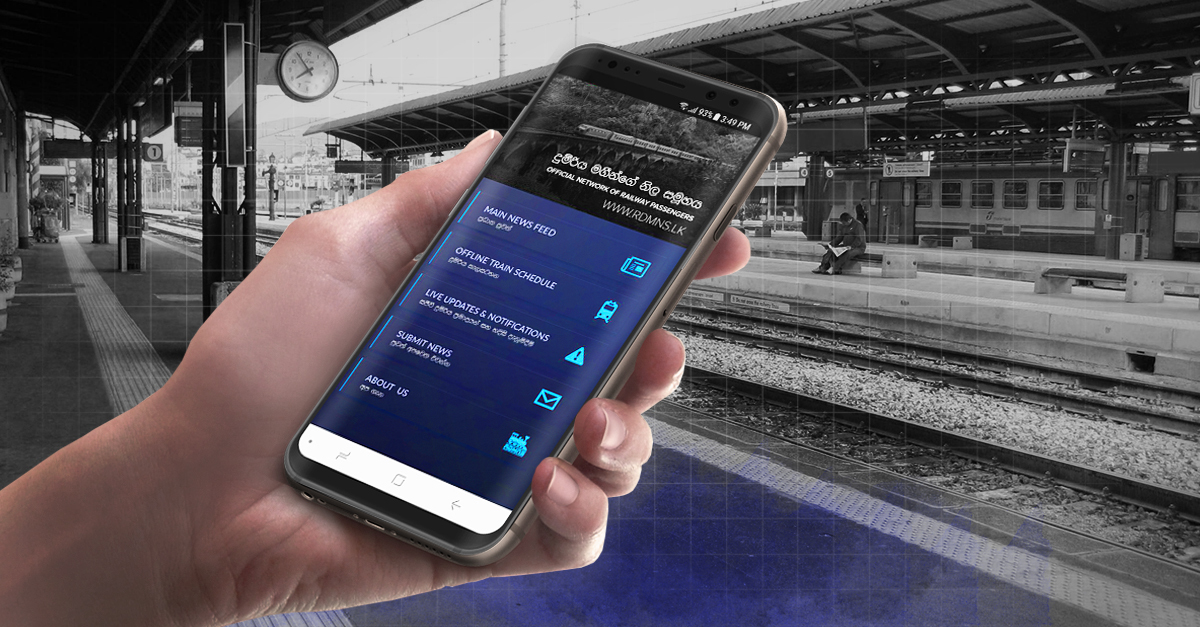 Everyone hates a late train.

An over-crowded train station that prolongs your commute is a living nightmare. More often than not, this is the reality of the Sri Lankan railway system: trains routinely run late, they are congested and commuters block the doorways.

Amidst this commotion, a group has come together to introduce a semblance of order to the railway system.

The Government Railway Passengers community is a group of railway commuters who have come together to share information about the daily schedules and other occurrences in the railway system. The group, which utilises social media to crowdsource information, predominantly operates on two active online platforms: the official Facebook group and the mobile application (available on Google Play Store and App Store).

The group’s English name, RDMNS, is formed from the initials of the Sinhala name — රජයේ දුම්රිය මගින්ගේ නිල සමූහය. The RDMNS community has now swelled to include over 75,000 daily commuters. These members swap daily updates on local railway services, train delays, derailments and even bizarre acts of human kindness.

The community was founded by five core members, but it now has as many as 25 administrators and information coordinators. We met two of the founding members, Viraj Harshana and Imal Meemaduma, who told us how the community came into being.

Here’s how it works:

According to Harshana and Meemaduma, the office crowd—who are avid users of social media— make up most of the chat groups that provide the initial reports.

“There are 250 individuals in the four chat groups, based on Facebook Messenger, for each (railway) line,” said Harshana. “The groups receive well over 1,000 reports per day, while the mobile app receives over 50-60 inquiries every day.” Apart from the usual reports, administrators also receive over 100 emails with additional information that is used in the verification process from those who are not part of the chat groups.

The community will celebrate its second anniversary this December, while the mobile app will turn a year old at the same time. Within this short time period, the community has become an exemplar of a crowdsourced information hub, dedicated to public service.

“The power of people who come together in these moments is magnificent,” said Meemaduma. “The app has huge potential and we would like to expand operations if not for the lack of funding. Right now, everything is being carried out through personal funds. Whatever we receive from advertising is utilised to organise CSR projects focusing on developing the railway system and upgrading public utilities in the country.”

Dubbed fondly as the ‘railway fans’, the founders are solely dependent on the community itself for marketing. “Word of mouth is the only marketing strategy that has been utilised for the app,” they noted with a laugh. “Since this is a crowdsourced endeavour, the community depend on its members to spread the news to other commuters.”

The community hopes to add new features to the application.

The new features will include tracking lost and found items and property on trains; an offline timetable is also in the works. With the latest update, which is scheduled for the near future, the app will introduce a method of tracking a train utilising GPS technology, and sharing its location in order to approximate arrival times. In addition, it will also feature useful contacts such as station contact numbers and railway security contact details in case of emergencies.

A train tracked via the app arrives at the train station in real time. Video credit: RDMNS

“During the last strike that hit the island, the app almost crashed due to the sheer number of traffic received,” Harshana said.

Despite the immense commercial possibilities presented by the app’s runaway popularity, Meemaduma and Harshana are not keen to cash in. “We just want to show the power of crowd sourced information and movement utilised as a public service, it’s a free service for the benefit of the public itself. It can certainly go a long way with proper funding, but right now, our interests lie with doing this service, not earning a profit.”