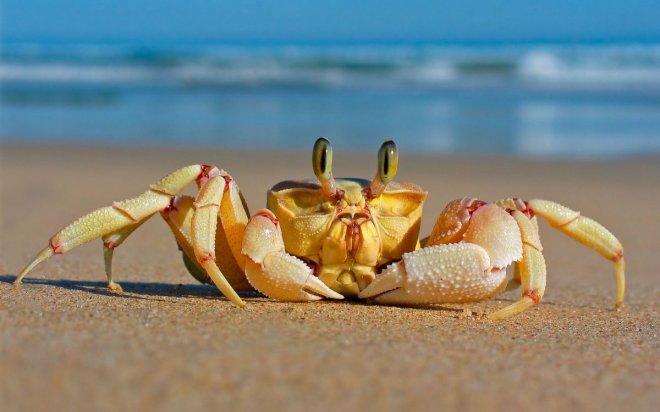 When we Sri Lankans think of crabs, we invariably think of the edible kind from our seas and lagoons that make such a scrumptious meal. A whole culinary culture based on crab has taken root in the country, as is evident in the number of restaurants around Colombo alone that specialise in meals featuring these crustaceans. There’s the Ministry of Crab, The Crab Company, and the Fat Crab to start with. However, our edible crabs are greatly outnumbered by other kinds, such as land crabs, calling crabs, and even so-called soldier crabs that can reduce a fleshy elephant’s head to bare skull within a couple of weeks. Here are some fascinating accounts of the crustaceans noticed by the writers of old:

Fossil Crabs That Were Used As Medicine

Little is it known that we had fossil crabs in the olden days. These were actually petrified crabs that had somehow turned hard, like bone, and were found in the vicinity of a large rock through which the Matti Aru river flowed. The rock, which was called Nachchiya Vellatu Malai, was in the Kuchchaveli area, about 22 miles north of Trincomalee. These petrified crabs, according to S. V. O. Somanader (Fossil Crabs of Kuchchaveli, Loris, June 1960), were ground in milk and swallowed as a remedy for kidney troubles. These were possibly the same fossil crabs that James Parkinson (Mineralized Remains of the Vegetables and Animals of the Antediluvian World, 1833) refers to as Ceylon Crabs:

“they having been formerly brought into Europe by the Dutch, who used to state that they were brought from Ceylon where only they were to be found.”

What exactly this species was, we cannot say, though it is possible that it was Latreille’s Sentinel Crab (Macrophthalmus laterreillei). It is described as such by a contributor to Country Life Magazine (1949) writing under the title Fossil Crabs of Ceylon. He describes them as semi-petrified crustaceans. This crab is endemic to the Indian Ocean with distribution in Sumatra, Java, Madagascar, and Sri Lanka, commonly lives under the mud of mangroves or on soft mud and substrates, and can measure up to 5 cm . It is said to be commonly found as a sub-fossil (1,000-5,000 years old) during channel and coral dredging.

Calling Crabs That Loved To Be Tickled

Calling crabs (Gelasimus tetragonun, G. dussumieri, or G. annulipes) are so called because they look as if they are beckoning you with an absurdly large, uplifted pincer, as big as, or even bigger than, their whole body. These crabs were once very common in Sri Lanka. An interesting account of this crab is given in Alan Walters’ Palms and Pearls or Scenes of Ceylon (1892). In his work, Walters refers to a kind of calling crab resembling the climbing agavule of Fiji, which lived on land near the sea, made  burrows in  the earth, and fed  on coconuts:

“They break through the eye of the nut with their pincers, and are handy at grabbing any human extremity that gets in their way. It is well to remember that if you are nipped, you can free yourself by tickling the crab, as if it were an alligator, upon the under side of its anatomy.”

These little critters were known to be quite the nuisance. Image courtesy deviantart.com

The sand or land crab (Ocypode ceratophthalmus) was once very numerous in the island’s coastal districts. They habitually came inland, and burrowed in public places like roads and race courses. Roads were especially affected by their invasions, especially in the olden days, when tarred or macadamised roads had not even been thought of by our colonial administrators. Reverend J. G. Wood (in Trespassers: Showing how the inhabitants of earth, air and water are enabled to trespass on domains not their own. 1875) talks about the land crabs of Ceylon who pass the greater part of their time on land, only visiting the water at intervals for the purpose of moistening their gills:

“In a favourable spot, the earth will be absolutely riddled with their burrows, even though the spot be several miles from the sea. Sometimes the locality which is selected is not agreeable to the human inhabitants of the place. For example, in several parts of Ceylon, they have chosen to burrow in the public road, and have become absolute nuisances. They could not be extirpated and, in consequence, a number of labourers were perpetually employed in filling up all the holes which the land crabs make.”

Another well-known hotspot they frequented was Galle Face, which, in the olden days, had a circular race stand in the centre, where horse races took place every September. Says a late officer of the Ceylon Rifles (Ceylon: A General Description of the Island. 1876):

“The Galle Face is much infested by a small land crab (Ocypode), rendering it dangerous for horses, who often fall with their riders, from the holes made by their burrowing under its surface.”

Soldier Crabs That Ate The Heads Of Elephants

An army of soldier crabs crawling across a beach. According to old accounts, in Ceylon these crabs were capable of devouring large, dead animals. Image courtesy: barwonbluff.com.au

We often hear of army ants going on the warpath, eating up everything that stands in their way, but soldier crabs are something uncommon. However, an English writer of old, J. W. Bennett, wrote about them in his book Ceylon and its Capabilities (1843). He says of the soldier crab:

“I have had the carcasses of almost every of indigenous animal, and the heads of elephants, buried in the sand, to the eastward of the town (Hambantota) and within a few yards of the sea, which, in less than a month, have been made perfect skeletons, by the innumerable small crabs, that everywhere abound in the sands near the sea.”

Rev. J. G. Wood, in his book Trespassers (1875), identifies these soldier crabs with hermit crabs which inhabit the shells of dead molluscs and walk about with perfect ease, trailing their borrowed habitations behind them. He is corroborated by A. E.Verrill who, in his paper Parasitic Habits of Crustacea published in the American Naturalist (1870) says:

“The Hermit or Soldier Crabs are interesting in their habits and well known to all sea-side naturalists. They always occupy the dead shell of some spiral gasteropod, which they carry about on their backs, and into which they retreat when alarmed.”

Back in the day, crabs were the reason one house was believed to be haunted. Illustration by Kyle Sampath Valentine

We sometimes hear of spooky tales of people becoming ghosts and haunting houses, but one story recorded by a Burgher lady from colonial times tells of crabs that became ghosts. Says Claribel Spittel in her Ceylon Ghost Stories (published in The Times of Ceylon Christmas Number, 1931):

“We were at lunch at a friend’s house, and the conversation turned on ghosts. One lady smilingly said she knew of a very good ghost story. And being urged to tell it, began:-

You know the canal which runs into the sea, at Wellawatte, don’t you? Well, there is a house by the side of that canal which had the reputation of being haunted, and remained unoccupied for many years. The owners had tried to let it without success, for tenants only moved in to move out again in a few days, complaining that it was impossible to live there, owing to the weird noises they heard during the night, and which, try as they might, they could not put a stop to, or trace to their source.

Rat-traps caught no rats, keeping cats and dogs was of no avail, while those who kept up at night neither heard nor saw anything. But as soon as everyone retired to sleep each night, the noises would begin, stealthy, creeping, pattering noises, as of ghosts walking about at dead of night. As soon as ever a light was lit, or any noise was made, and before break of day, the noises would cease as suddenly as they had begun, leaving no trace of the ghostly visitants.

The house lay empty and neglected for many a long year. Not even the inducement of living in it free of rent, and making it attractive as a living place decoyed anyone there; its ghost-ridden reputation proved too much. At length the owner died, and it became the property of his son-in-law. The new owner was told the story of the house, but declared he did not believe in ghosts, and was determined to get to the bottom of the mystery of the noises heard at night. He therefore got an equally skeptical friend to join him, and decided to spend a few nights in the house, in order that he might hear, and perchance see for himself, what was the cause of the uncanny sounds which drove all and sundry away.

They slept out the first night without hearing any disturbing sounds at all. But on the second night, soon after falling asleep, the owner was awakened by his friend who said he had suddenly started up to hear some strange sounds outside. Both listened intently. There came the sounds as of a lot of people with lightly-sandalled feet, creeping along, and trying to scurry quickly past their window. Hastily picking up a small lantern they opened the door leading out to the garden from where the noises seemed to come. To their astonishment the sounds had died away, not a leaf stirred, not a thing was to be seen by the rays of their lantern; everything else remained in inky darkness.

Much puzzled they returned to bed; the following night the same thing occurred, and the mystery appeared to be as great as ever. But by the third night they were determined that they would find out more about it. So they arranged to lie down in their day clothes in bed, that no time would be lost in going out of doors when the first noises came from the garden. They also provided themselves with two powerful electric torches, and one of them with a loaded revolver as well.

They retired as usual, rather late, and lay down as they were. At midnight, after all the lights had been put out, when everything was still, and they were just beginning to feel sleepy, suddenly there came the usual strange, stealthy, creaking, shuffling, pattering noise just outside the window. In a trice they were up, and had rushed out of doors, flashing on their torches as they went. Imagine their surprise and bewilderment to see before them, an army of enormous fresh-water crabs scuttling away as fast as they could, and disappearing in a few seconds, into the water of the canal which flowed alongside the garden!”

And so ended the mystery of that haunted house. As Claribel notes, the crabs had evidently come up from the canal in search of refuse dumped down in the garden, whenever the house was in occupation. The garden was subsequently enclosed by a substantial wall, and the crabs made no attempt to scale it, for they never came back again, and no longer did the house frighten people away.

So next time you tuck into that scrumptious crab, be sure to spare a thought for the lucky ones that did not make it to your plate. Happy eating!