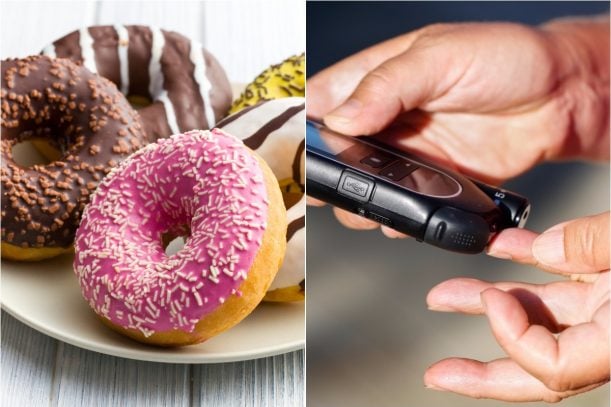 The Avurudu season came and went in a flurry of age old customs and mouthwatering traditional sweets, dripping in oil and syrup. With it arrived those unwelcome extra pounds that seem to have no intention of budging anytime soon. However, despite the seasonal bulge battling with your waistbands, do you still find yourself reaching for the tin of leftover kevum and kokis, guiltily promising yourself that this will be the last one? Put the tin down and back away slowly – you may as well be in the presence of a ticking time bomb. Our traditional food may be delicious, but it definitely does not bode well for the nation’s health, what with the threat of diabetes looming over more than four million people in Sri Lanka.

Ironically, the same month we were stuffing our faces with sugary goodness, the World Health Organization (WHO) called for “action on diabetes”, dedicating April 2016’s World Health Day to beating the disease. This came hard on the heels of a report by the WHO, which stated that the number of adults with diabetes around the world had quadrupled from 108 million in 1980, to about 422 million today, with the prevalence for type 2 diabetes rising faster in developing countries.

All this looks tempting ‒ until you discover that seven percent of all deaths in Sri Lanka are due to diabetes. Image credit: peotv.com

Further statistics from the International Diabetes Federation show that nearly a fifth of all adults with diabetes hail from South East Asia alone, with India, Bangladesh, and Sri Lanka responsible for 98.8% of the region’s total diabetic population. Despite the supporting data, it still comes as a shock that 7% of all deaths every year in Sri Lanka are due to diabetes, as revealed by the WHO in a 2014 estimate. The contributing factors to this are believed to be high blood glucose levels, excess body weight, and lack of physical exercise.

Diabetes, more specifically known as “diabetes mellitus,” is a chronic, metabolic disease that occurs when your body does not produce enough insulin, or when it cannot effectively use the insulin that is produced by the pancreas. Insulin is a hormone that controls the level of glucose or sugar in the blood, by converting the extra glucose to a storage product called glycogen, which is then transported to the liver. People with diabetes cannot perform this function. Diabetes, therefore, is characterised by raised blood glucose levels for prolonged periods of time. This condition is known as hyperglycaemia.

Type 1 diabetes or childhood-onset diabetes results from the body’s inability to produce insulin. The cause of this condition is unknown. Type 2 diabetes, previously known as adult-onset diabetes, is caused by insulin resistance, in which the cells of the body cannot use insulin effectively. People with type 2 diabetes make up the majority of the diabetic population around the world. Gestational diabetes occurs during pregnancy when blood glucose levels rise above the normal level, but remain below the diabetic level.

Obesity and excess body weight are the main causes of the prevalence of diabetes in the world. Obesity is more common in developed countries than in developing countries, such as those in South Asia. However, we seem to be catching up pretty quickly, with an astonishing 26.1% of Sri Lanka’s population reported as being overweight, and 6.8% recorded as being obese in a 2016 census by the WHO. Asians are more prone to developing diabetes with lower weight gain than Europeans. Moreover, Asians, including Sri Lankans, have a greater tendency towards abdominal obesity, and have less muscle mass and more visceral or “hidden” fat, compared to Western populations. This, too, can lead to diabetes.

Diet is another driving force in the worldwide occurrence of diabetes. It has been found that the nutritional shift in the last decade, from the consumption of coarse grains such as brown rice, to polished, white rice and refined wheat, correlates to the increase in diabetes in Asia. Excess intake of saturated fats (animal fats) and calorific food with a high glycaemic load can lead to diabetes. This is because foods that have a greater glycaemic index are normally high in sugars, therefore cause a greater increase in blood glucose levels. In addition, a diet high in fatty foods can lead to high cholesterol levels in the blood, which in turn, can accelerate the onset of diabetes or worsen its effects. The combination of eating too much high energy food and not exercising enough has also been shown to cause obesity and increased insulin resistance in the body.

A shift in preferences from brown rice to white rice is believed to be linked to increase in diabetes in Asia. Image credit: fitday.com

This leads us to physical activity, or the widespread lack thereof in our country. The 2016 global report on diabetes by the WHO revealed that a whopping 23.7% of Sri Lankans were physically inactive, with almost twice the number of females showing physical inactivity, compared to males.

Other contributing factors to type 2 diabetes are cigarette smoking and alcohol use. Studies show that smokers have a 45% greater risk of developing diabetes than non-smokers. The prevalence of total adult tobacco smokers in Sri Lanka was last measured at 15%, showing that a sizeable portion of our population is at high risk of developing diabetes. Heavy alcohol intake, too, can have adverse effects on the metabolic system, the liver and the pancreas, leading to diabetes.

Some people are thought to be genetically susceptible to the disease. People with a family history of diabetes have a greater tendency to develop the disease when faced with environmental triggers such as an unhealthy lifestyle or obesity.

What Are The Symptoms Of Diabetes And How Can It Be Diagnosed?

Symptoms of diabetes include:

When blood sugar levels reach very high proportions, the individual can go into a diabetic coma.

A number of tests can help screen for diabetes, and early diagnosis is important. Image credit: putthatcheeseburgerdown.com

In type 1 diabetes, the symptoms tend to develop rapidly over a period of weeks. However, in type 2 diabetes, the symptoms develop slowly over time, so you may not realise you have the disease till the damage becomes obvious. Early diagnosis for type 2 diabetes is crucial, in order to reduce the risk of complications later on. Screening for diabetes is done by several tests, including plasma glucose tests (more familiarly known as blood sugar test), urine tests, haemoglobin tests (blood test) and/or oral glucose tests (usually done to diagnose gestational diabetes).

What Are The Complications Caused By Diabetes?

Diabetes can wreak havoc on many of the systems within your body, including the circulatory system, cardiovascular system, nervous system and renal system. The main long-term damage diabetes does, is to the blood vessels, affecting the eyes, kidneys and the nerves. Damage to the blood vessels in the eyes result in gradual loss of vision and eventually blindness, in a condition known as diabetic retinopathy. Diabetes also increases the risk of heart attacks, strokes, and kidney failure by two to threefold. Another serious complication of this disease is nerve damage in the feet (neuropathy), caused by decreased blood flow. This leads to the formation of slowly healing foot ulcers, which can become infected, resulting in the amputation of the limb to prevent the infection from spreading further. Diabetic people are also prone to hypercholesterolemia, a condition in which the presence of cholesterol in the blood increases to very high levels, causing blockages in the blood vessels leading to the heart. This leads to ischemic heart disease, which is characterised by a reduced supply of blood to the heart.

Who Is Open To The Risk Of Diabetes?

Anybody with the risk factors mentioned previously is susceptible to diabetes. In Sri Lanka, 23% of the younger population living in urban areas, within the age range of 5 to 40 years, have two or more risk factors for diabetes. These factors are identified as physical inactivity, excess body mass, and a family history of diabetes. In addition, a 2016 census by the WHO shows that there is a greater percentage of women with diabetes than men, in Sri Lanka, but the death rate for males with diabetes is higher than for females.Till recently, it was believed that only adults could get type 2 diabetes, but lately, even children have been seen to develop the disease. The South East Asian region also has one of the highest prevalence of type 1 diabetes in children, with 77,900 children affected, according to a 2013 estimate.

Can Diabetes Be Prevented?

There are no preventive measures for type 1 diabetes. However, the onset of type 2 diabetes can be prevented by early screening and making changes to your diet and fitness. Maintaining a healthy body weight, staying physically active, and eating foods that are low in sugars and saturated fats, and high in fibre, are effective ways of keeping diabetes at bay. Giving up tobacco smoking and reducing alcohol consumption can also help prevent diabetes.

How Can Diabetes Be Treated?

There are several ways diabetes can be tackled, and these should be complemented by certain lifestyle changes, too. Image credit pixabay.com

There is no cure for diabetes, but its symptoms can be effectively controlled, when detected at an early stage in the development of the disease. Preventive measures and treatment can also be taken to keep your blood glucose at normal levels. Type 1 diabetes can only be treated by insulin therapy, but there are a variety of medications for type 2 diabetes, including oral medications, like metformin, or injectable medications. However, it is important to make some lifestyle changes as well, such as losing weight if you are overweight, reducing your calorie intake, exercising regularly, and maintaining a healthy diet that is low in sugars and fats. In some countries, obese individuals with diabetes are advised to undergo weight loss surgery.

In 2012, diabetes was found to be one of the top three causes of death in Sri Lanka, with ischemic heart disease and strokes (both of which can be complications caused by diabetes) being the two leading causes of death. Statistics collected by a research team led by Dr. Prasad Katulanda a few years ago, showed that one in five adults in Sri Lanka had diabetes or were pre-diabetic, and a third of those who had diabetes were undiagnosed.

The rapidly rising prevalence of diabetes can have a grave impact on the economy of the country and put a strain on our health system. These figures call for national policies focusing on the screening, prevention, and management of diabetes. Nationwide strategies and awareness programmes addressing the diet and physical activity of individuals can help counteract the effects of urbanisation, the progressive shift to Western dietary patterns and the increasingly sedentary lifestyles observed of late.

Diabetes is not just a disease for the elderly – it can affect anyone at any age, and it can creep up on you unawares. One in every four people around the world have no idea that they are living with diabetes. Awareness of the disease and early detection are important, but prevention can save you a lot of unnecessary grief. So put that half eaten donut away, and go out for a run instead – trust us when we tell you, you will be adding years to your life.